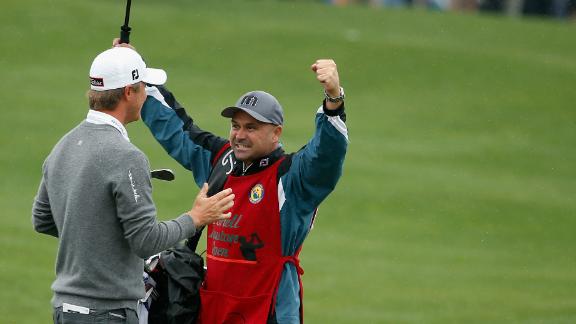 HUMBLE, Texas -- Matt Jones told his caddy he was about to make a 42-yard chip-in on the first playoff hole at the Houston Open.

The Australian did just that on Sunday, earning his first PGA Tour win in spectacular fashion -- and changing his immediate travel plans in the process.

Jones, who began the day six shots off the lead, shot a final-round 66 and ended the tournament 15 under to earn his first trip to the Masters with the dramatic win over Matt Kuchar.

He earned nearly $1.2 million for the win, also making amends for a disastrous missed putt last September that appeared destined to keep him from playing at Augusta National.

Destiny, however, had other plans for the 33-year-old who played collegiately at Arizona State.

"Going to Augusta is amazing," Jones said. "The win means everything to me right now because that's what we play for is to win. To have Augusta as a reward for that win is amazing."

In September, Jones lipped out an 8-foot birdie putt on the last hole of the BMW Championship -- a putt that would have earned him a trip to next week's Masters by sending him to the Tour Championship.

After briefly tying Kuchar in the middle of the round on Sunday, Jones' chances at redemption for last year appeared finished after he bogeyed the next-to-last hole in regulation. The setback left Jones at 14 under, two shots back of Kuchar.

However, Jones -- in the first of his two memorable moments on the 18th -- rolled in a 46-foot putt for birdie. That pulled the Australian within one shot of Kuchar, who was watching his closest challenger from the tee.

"I was going to three-putt before I left it short," Jones said. "I didn't care about finishing second or third or fourth; it didn't matter. I was only trying to get the win."

Kuchar went on to bogey the final hole of regulation after sending his second shot into the water. That set the stage for the playoff in the soggy conditions at the Golf Club of Houston.

Jones sent his tee shot on the first hole of the playoff into the right fairway bunker. He then landed just short of the greenside bunker with his second shot, while Kuchar found the bunker from the fairway.

It was the second straight miss of the 18th green from the fairway for Kuchar, who sent his fairway metal on the 72nd hole into the water before recovering to make bogey and reach the playoff.

Jones didn't leave Kuchar any room for error in the playoff, sending his chip over the greenside bunker and watching as it rolled in -- causing a roar from the gallery and leaving Jones standing with his arm raised in celebration.

"I walked up there and told my caddy I was going to chip it in," Jones said. "... You don't know if it's going to lip out, low or high, but when I saw it disappear it's probably the happiest I've been on the golf course."

Jones is the second straight Australian to win on the PGA Tour, following Steven Bowditch's win at the Texas Open last week.

It was in San Antonio that Kuchar struggled to a final-round 75 while playing in the final pairing with Bowditch. The American began Sunday with a four-shot lead over Sergio Garcia and Cameron Tringale, but he bogeyed the first hole on his way to a disappointing even-par 72 and bitter ending.

Kuchar had a chance to match Jones' chip-in, but his bunker shot came up short.

"Certainly fantastic stuff (by Jones) to birdie 18 twice," Kuchar said. "That's probably the hardest hole on the golf course, and for him to put two 3s is pretty impressive stuff."

Golfers were sent off in threesomes early Sunday morning for the second day in a row because of the threat of strong storms in the Houston area. The rain, heavy at times, began early during the final pairing's round, but the pros finished without any delays.

The playoff opening was all that was need for Jones, whose previous best finish on the PGA Tour was a tie for second at last year's Greenbrier Classic.

It also resulted in an unexpected visit to next week's Masters, a tournament Jones said he wouldn't visit unless he earned his way there.

"I was going home to play with my 2-year-old and 3-week-old," Jones said. "So, bit of a change now that I think they'll be on a plane to Augusta as well. We've got to find a house."

Garcia finished in third at 13 under, while Tringale was fourth at 12 under.

Rory McIlroy matched the low round of the tournament with a 7-under 65 on Sunday, finishing tied for seventh at 8 under overall.

Phil Mickelson, who won the tournament in 2011, was 1 under on Sunday and finished 7 under overall in a tie for 12th -- a week after he was forced to withdraw from the Texas Open because of a muscle pull in his right side.