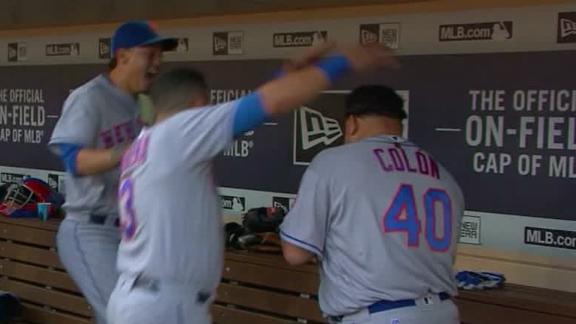 SAN DIEGO -- New York Mets starterBartolo Colon's hitting has been celebrated for its comedic value in recent years, especially when his helmet goes flying off his head during his swing.

However, his hitting might be taken more seriously going forward. Colon launched a two-run homer on a 90 mph fastball from San Diego Padres right-hander James Shields in the second inning Saturday at Petco Park in what became a 6-3 victory for the Mets.

The first home run of Colon's career came at 42 years, 349 days. Colon is the oldest player to hit his first career homer. He unseatedRandy Johnson (40 years, 9 days), according to the Elias Sports Bureau.

Colon labeled the moment the biggest of his career.

"The three years that I've been here, I was chasing one. Even back in my Montreal days," Colon said through an interpreter. "But I wasn't expecting something like this to happen. ... My heart was beating a lot. And today's a day I'm never going to forget."

His trot around the bases lasted 30 seconds, and teammates erupted in the dugout. As Colon completed circling the bases, his teammates jokingly cleared out of the dugout, so he had no one to high-five once he completed his journey. They emerged to mob him, however.

"When I was rounding third base, I saw the guys running down into the tunnel," Colon said. "Once I got in, I enjoyed it."

Said captain David Wright: "That might be one of the slower home run trots you're ever going to see. He enjoyed it certainly, and we enjoyed it."

Mets right-hander Noah Syndergaard took to Twitter on Sunday morning to honor the moment, which he joked took a day for him to process.

Shields was less amused. Asked if he was surprised by Colon's turning on the fastball, Shields said: "Next question, man."

The shot into the left-field corner traveled 357 feet and left Colon's bat at a speed of 99.6 mph.

The Padres successfully recovered the baseball so Colon could keep it as a memento. Colon said he will retire the bat used to hit the homer. He noted that he has hit plenty of homers during his career, but those came playing softball in the Dominican Republic.

Kevin Plawecki, who scored on the play, said he almost missed third base because he was so euphoric. Plawecki and Wright noted that Colon displays plenty of power in batting practice.

"You just shake your head," Wright said. "You know, you watch him take BP, and he's got very good hand-eye coordination. And you see him hit some home runs in BP, and you think to yourself, 'What would happen if he ever did it in a game?' ... It's one of those things where you come to the ballpark never knowing what you're going to see. You saw it."

Said Colon: "When I'm at home plate, the helmet usually flies off. But for the most part, I take it seriously, and if the fans have fun with it, go for it."

Colon became the fifth-oldest pitcher to homer in a major league game. The only older were Jack Quinn at 46 and Dazzy Vance, Phil Niekro and Warren Spahn at 43. Colon is the second-oldest Mets player to homer. Julio Franco homered on May 4, 2007, when he was 48 years, 254 days old. Willie Mays is the only other Mets player to homer at age 42 or older.

Colon's major league debut was April 4, 1997, in a no-decision for Cleveland against the Angels. Franco was his teammate. The opposing manager was Terry Collins, now in his sixth season as the Mets manager.

Shields tied with Kyle Kendrick for the most homers allowed in the majors last season (33).

It has been a noteworthy week for Colon on multiple fronts. He earned career win No. 220 on Monday against the Atlanta Braves, breaking a tie with Pedro Martinez for second among Dominican-born pitchers. Juan Marichal ranks first, with 243. Before Saturday's home run, Colon had been 10-for-129 (.078) as a Met.

"We all know he's an entertaining guy at home plate," Collins said. "So to have him ambush something like that and hit a homer is pretty special."

Bartolo Colon, Mets double up Padres
Bartolo Colon hits his first career home run, Yoenis Cespedes, David Wright and Michael Conforto each add one of their own, as the Mets top the Padres 6-3. 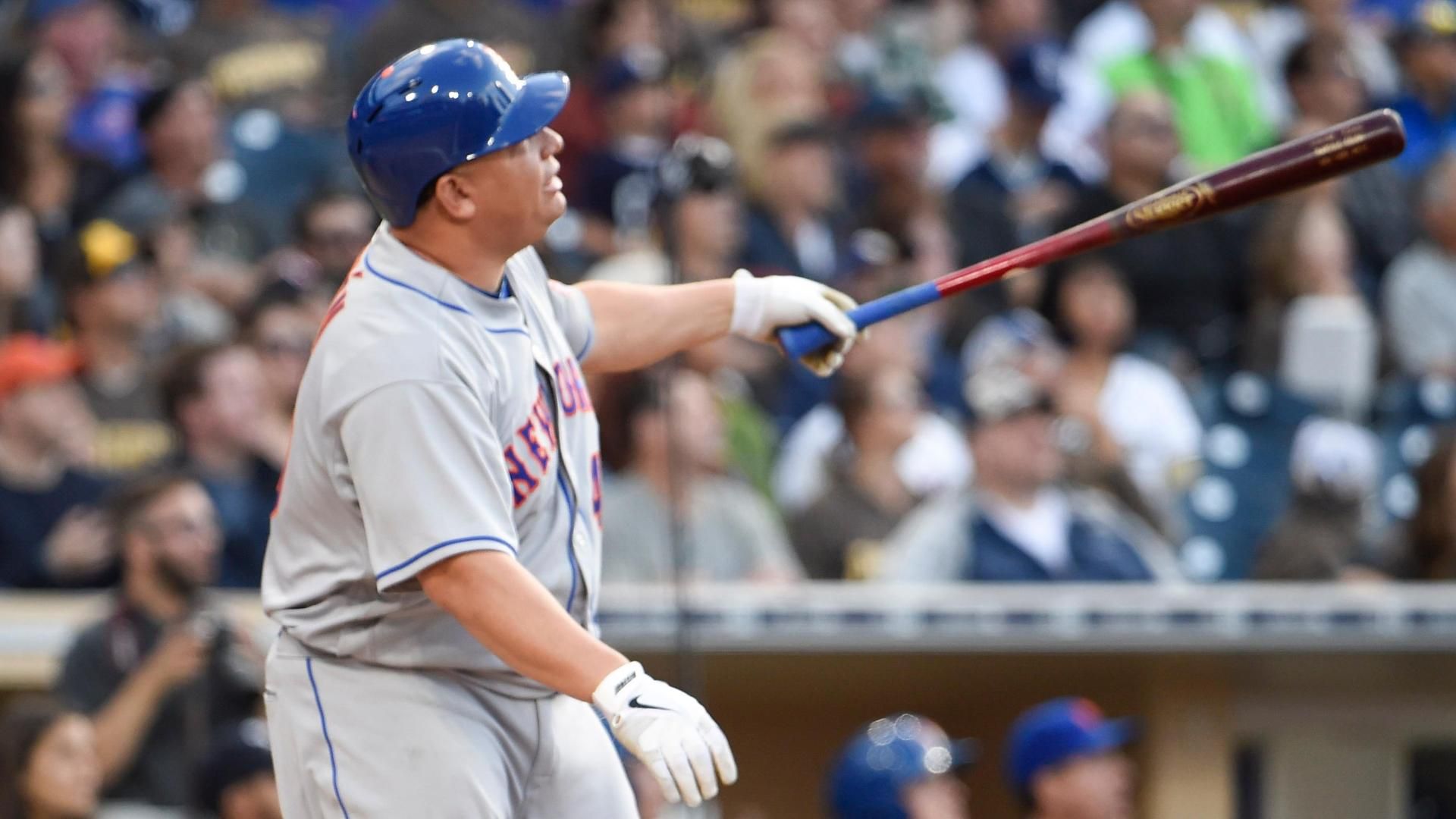