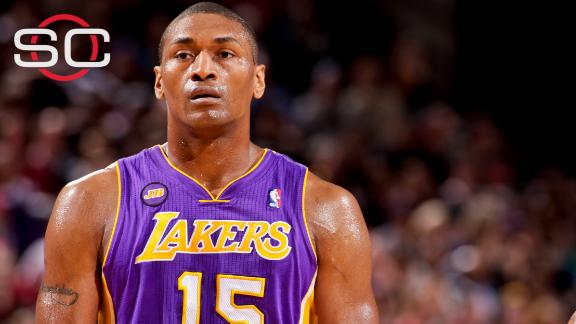 World Peace and the Lakers agreed to a one-year, nonguaranteed contract, according to Yahoo! Sports, which first reported terms of the signing. The deal will give World Peace an opportunity to be with the team at least through training camp, which begins for the Lakers next week in Hawaii.

World Peace, 35, would be the 19th player on the Lakers' roster, four more than the regular-season maximum. Teams can carry up to 20 players heading into training camp.

"I think he'd be great in the locker room with young players," Lakers general manager Mitch Kupchak said earlier Thursday, before the deal was announced. "But we have to be careful not to use a roster spot too early because we have a lot of young kids."

While World Peace has been out of the NBA for a year after last playing for the New York Knicks in 2013-14, he has been a steady presence at the Lakers' practice facility this offseason.

World Peace has been especially impressive while working with Lakers forward Julius Randle, the team's seventh overall pick in 2014, who suffered a broken leg in his NBA debut last season.

"It's great to have him go against Julius. To watch those two guys practice, it's almost comical," Kupchak said. "I'm not sure who gets the better of it. I would be surprised if either player admitted to anybody after practice that they hurt more than they did before practice."

World Peace played four seasons with the Lakers from 2009 to 2013, averaging 9.9 points and 4.0 rebounds per game. He played a crucial role in the Lakers' win over the Boston Celticsin Game 7 of the 2010 NBA Finals.

The Lakers used the amnesty clause on World Peace after the 2012-13 season.