Michael Jones on the All Blacks, testing faith and career-blighting injuries 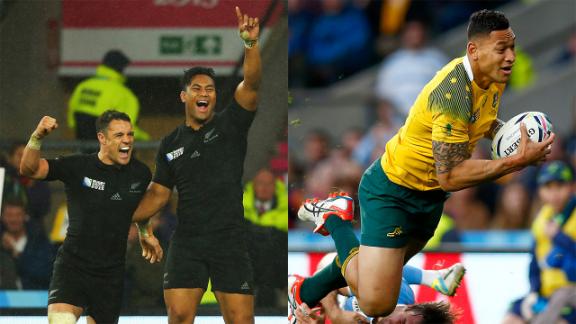 When the great Richie McCaw plays his final game for New Zealand on Saturday, the debate over his standing in the pantheon of All Blacks greats will intensify. The current All Blacks coach, Steve Hansen, has already put him on that pedestal but John Hart, coach of the 1987 Rugby World Cup-winning side, had a different answer when asked in 2013 whom he believed was the greatest ever player to pull on the famous black jersey.

"To me, clearly, Michael Jones," Hart said. "Without peer, a man who played all three loose forward positions, and with the skills to play in the midfield. A freak on the field, and a gentleman off it."

It is almost a paradoxical experience talking to the great All Blacks back-rower; his calm, unique voice and gleeful persona belie his once notorious physicality. When he stood in the All Blacks back-row he carried the nickname 'Iceman', partly due to the brutal injuries he sustained but also due to his demeanour.

Like McCaw he never really put fist to face. Instead, his physical presence was reinforced through technique and an understanding of the human psyche's vulnerability. It was a mentality that saw him win 55 All Blacks caps from 1987 to 1998, a total that would have been far greater but for two dreadful injuries in 1989 and 1997.

"You go to war for your country, you can't take a backwards step," Jones tells ESPN. "In the late 1980s, early 1990s there weren't the cameras or the touch judges so there were a lot of things happening that people got away with. It was about intimidation and physical domination. I knew that if someone went for me, I had them straight away so I just had to focus on my game.

"I found a way to send a message to them that I didn't need to throw a punch back, but I could smash you hard in the tackle, aim for your ribs in the ruck or rub your face in the ground. They'd get the message that way. I'd never take a backwards step, but all legally and in the rules of the game."

Like the great Bryan Williams -- who represented Samoa and New Zealand -- Jones is adored by both countries. Modern rules forbid the dual-international but Jones' heritage sees him as the personification for why the current powers that be should allow that transfer. He was born in Auckland but aged just four, his father died. His Samoan mother and that side of the family brought him up there. "That allowed me to move between both sides, seamlessly," Jones says.

From the age 10 he caught the eye of the Auckland selectors as he was frequently seen vaporising those eight years his senior. Stardom and the silver fern beckoned but he first played for Samoa in 1986, when Wales came to town: such was the paucity of opportunity to play a top international side in Apia, the Islanders beckoned him back south. "They sent me back to New Zealand and said 'pursue your dream'."

A deeply religious man, there was almost predestination about his All Blacks career. His New Zealand debut was in the first match of the 1987 World Cup, in which he scored. His fourth All Blacks cap saw him cross again and help his side to a 29-9 win over France, in the final.

"That was one of the two highlights of my career alongside winning in South Africa in 1996," Jones says. "The World Cup, it was firstly because of the circumstances as the first competition, in front of our own people, and it was my first year as an All Black. I couldn't have asked for more. My first game was at Eden Park -- that was truly special. To be in the right place at the right time was awesome. [Grant Fox] had broken left from a scrum next to their line so I knew I had to be on his shoulder to score. Then to get to the final and to play so convincingly was brilliant. It was the complete team performance really against France."

It should have been the start of a career that would have perhaps seen him become the All Blacks' first Test centurion. But in 1989 he suffered a near career-ending injury against Argentina in Wellington. "The dream was nearly taken away from me in a freak accident. I ruptured every single ligament in my knee and I remember the doctor gave me the prognosis that it was the end of my career.

"The injury was like being hit by a car at 40km/h and it was the worst knee injury the doctor had seen. I didn't want to give up on the dream; I didn't want any regrets. It was excruciatingly difficult but my faith was important. After a spell out I was able to play for my first game. A month later I was back in the All Blacks tour for France in 1990."

The injury saw him shift from the openside to blindside. "I had to reinvent myself; I had to live with a lot of related niggle injuries due to the fact my knee was basically reconstructed. I think that's why my other knee went in 1997 when I ruptured the patella tendon. I lost a metre or two of speed but got wiser and smarter. Josh Kronfeld and Andrew Blowers were also coming through. Zinzan Brooke and others also made that transition easier."

Underpinning that recovery is the recurrent theme of his Christian faith. It was at times his albatross. Such was his steadfast conviction that he declared himself unavailable to play on Sundays. The decision saw his game time in the 1991 World Cup reduced and then omitted for the 1995 tournament as both the quarter- and semifinals were on Sundays. There are no regrets as he looks back now years on, but it was testing.

"I'd always been brought up that Sunday was the Lord 's Day, it was the day we were always at church and with our family. There were a couple of times when it was tough, there was 1992 in Australia when there were a lot of injuries in the loose forwards and it was a Sunday game and I was fit and healthy, sitting there in the stands. They are your family when you're on tour and you're dying to be out there but because of that conviction you feel like you're letting people down.

"It was difficult but I had to hang tough and stay true to what I was called to do as a Christian. It did tear me apart."

Eventually his body said enough is enough and after battling back from another knee injury in 1997 -- he suffered a broken jaw in 1993 -- he was then dropped a year later and retired in 1999.

Rugby is still in Jones' bones. He was assistant coach for Samoa in 2003 and was head coach in 2007. His professional coaching days are behind him but even now, in 2015, it is a driving force in his life alongside his religion.

For Jones his time is divided between giving time to the charity Village Trust, his job in the shipping industry and his role as president of Waitemata RFC. He also coaches his son's team. Rugby will never escape him, it is in his DNA as it is McCaw's.

The great Jones deserves to be mentioned in the same breath as McCaw, they are the two All Blacks opensides to have won the World Cup. Their very being is etched into the Kiwi heritage.

You hope both will continue to have some role in the game. "I can never not be involved in rugby, it is a privilege."