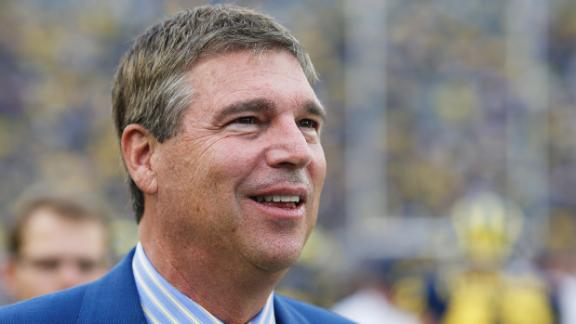 Michigan's governing board and university president said Thursday they plan to take a "long-term approach" to reviewing the current state of the school's athletic department.

President Mark Schlissel opened the university's monthly board meeting Thursday by saying he was "deeply disappointed" with the athletic department's handling of quarterback Shane Morris' head injury in late September and the communication blunders that followed.

Schlissel did not mention athletic director Dave Brandon, who's received the brunt of the recent criticism, in his comments.

The regents who spoke to reporters following the meeting echoed Schlissel's sentiment about completing a deliberate review before making decisions about long-term changes. They said they did not know how long Schlissel planned to deliberate Brandon's future.

In the meantime, third parties close to Michigan have begun testing the waters for potential replacements if he does decide to make a change in the athletic director's office.

A source told ESPN.com's Adam Rittenberg that a Michigan donor has reached out to athletic directors at other Power 5 schools to gauge their interest in the job. On Wednesday, ESPN's Brett McMurphy reported that a third party has contacted three potential candidates to replace Brandon.

"It's a circumstance that requires patience and also a degree of urgency," regent Mark Bernstein said. "John Wooden, the UCLA basketball coach, used to say, 'Play quickly, but don't rush.' This is the kind of thing that needs resolution, but it's not the type of thing that serves anybody well to come out immediately with a decision."

Bernstein said that the review comes after a long string of events that have eroded the relationship between the athletic department and the larger university community. The football team's poor performance this fall and Morris' injury, Bernstein said, have been "like a spark in a very, very dry forest."

"There's not a lot of water around right now," he said. "I think the actions of the athletic department, I think it would be generally agreed, have drained whatever reservoir of goodwill there is for Michigan football in particular. It makes navigating this issue far more difficult."

Bernstein said he didn't want to comment on whether or not he supported Brandon. Andrea Fischer Newman, the only other regent to speak with the media about Brandon, said she supported the athletic director but wished he had communicated better following Morris' injury.

"I think the university was slow in responding to everything that happened in the past month," Newman said. "I don't know whose immediate responsibility that is, but I think we agree there was definitely a response problem."

Newman stressed the importance of looking at the athletic department in its entirety -- and not just the football program -- when working to advise Schlissel.

Schlissel outlined four goals he hopes to keep in mind during his review. They included evaluating the program's integrity, listening to concerns about achieving balance in the department, building a stronger connection to the university community, and thoroughly addressing player safety.

He said he has already reached out to students, alumni and members of the community to find ways to bridge the gap between those groups and the athletic department.

Brandon met with members of the student body earlier this week and took steps to try to mend that relationship. Michigan agreed to significantly lower student ticket prices for next year's football games and hold regular open forums where students can talk with Brandon.

"Michigan Athletics looks forward to forging a strong relationship with Central Student Government," Brandon said in a statement released Thursday night. "This is an important relationship for us, one that we need to repair, and one that will provide mutual support among all students. We have worked closely with CSG over the past year and this will continue to strengthen our very important work with the student community."

Student body president Bobby Dishell said it will take more time for Brandon to fix that relationship, if he is able to fix it at all.

"This is a step in the right direction," Dishell said. "It's a good step, but it's not going to be fixed overnight. Trust is something that needs to be built. It takes going above and beyond to rebuild trust."