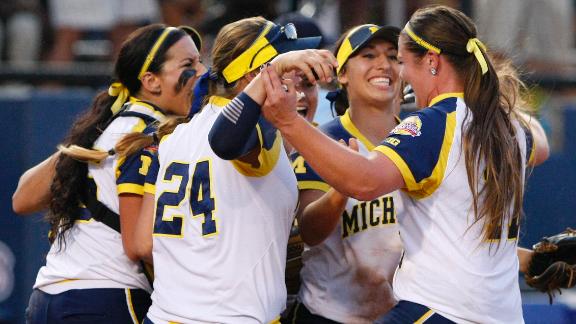 OKLAHOMA CITY -- Haylie Wagner hadn't started in more than two weeks. She was ready when called upon.

The senior threw a complete-game shutout, and Michigan beat Florida and ace Lauren Haeger 1-0 on Tuesday night in the Women's College World Series to force a deciding third game for the national championship.

Wagner earned the start based on her overall play at the World Series, and she kept it going. On Tuesday, she threw a perfect seventh inning and struck out the final two batters to help the Wolverines (60-7) even the best-of-three series 1-1.

"I knew it was going to be tough," she said. "But I just went out there, attacked them, and I wasn't going to let them beat me."

Wagner is 3-0 at the World Series and has thrown 19 innings without allowing an earned run.

"We rebounded from last night," Michigan coach Carol Hutchins said. "They got it together, our leadership got them together, and they came out here and they just played Michigan softball. They had great enthusiasm, and they had great heart."

Kelsey Susalla's single knocked in Sierra Lawrence in the first inning for the game's only run. Haeger, the national player of the year, gave up only four hits, but she got no support and fell to 31-2 on the season.

Florida (59-7) could have become the first team to repeat since Arizona in 2006-07. Now, Michigan is still alive for its first title since 2005. The teams meet again Wednesday in a winner-take-all game.

Florida put runners on first and second with one out in the fourth, but failed to score.

Michigan missed a chance to extend its lead. Lawrence doubled in the fifth inning, but Sierra Romero hit into a double play to end the inning.

Florida's Kirsti Merritt reached second in the sixth but did not advance.

Wagner got Haeger to pop out to start the seventh. Haeger had been 7 for 12 with three home runs in the World Series heading into that at-bat.

Both teams are in good position with their pitching staffs. Haeger threw just 68 pitches, Wagner threw 81, and regular starter Megan Betsa is rested.

"They can go back with Wagner tomorrow if they want to go living off that momentum, or back to Betsa, who's had a good season as well," Florida coach Tim Walton said. "I guarantee you that however many pitchers they have on their team and however many pitchers we have on our team, tomorrow, you're going to see them all, no matter what it takes."

Haeger said she's going to be focused heading into the final game of her college career.

"I think it's going to be a little different for me," she said. "I'll try to do what I do every day, but be a little more competitive. I obviously want to win my last game in a Gator uniform -- that means a lot to me. I just want to leave it all out there on the field and not play scared."