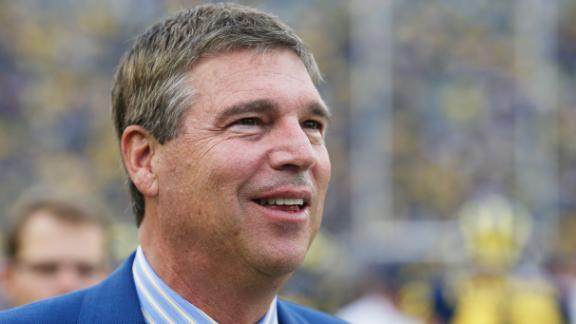 Michigan has targeted Northwestern athletic director Jim Phillips as a candidate to succeed Dave Brandon, according to a source.

This is an indication that Michigan will seriously consider candidates without university ties.

Brandon resigned Friday amid a storm of controversy. A string of athletic department mishaps in the past several months dominated headlines around the Michigan campus and served as a regular distraction at sporting events.

Some logical candidates also likely to be considered include Connecticut's Warde Manuel and Boston College's Brad Bates, who do have Michigan ties.

Phillips has served two years as the AD Chair of the Big Ten while also working as a member of the Rose Bowl Management Committee. Northwestern has had more than 200 Academic All-Americans in each of the past four years.

Michigan in the past has considered Northwestern football coach Pat Fitzgerald as a head coach candidate, but Phillips secured him to new contracts.