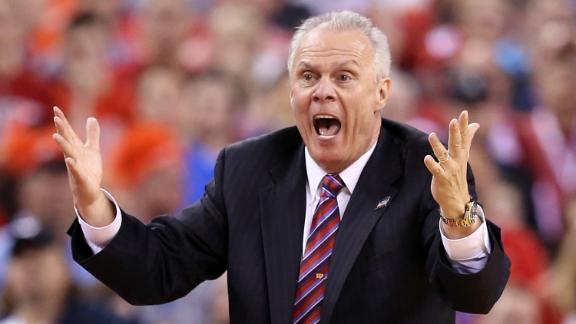 Duke coach Mike Krzyzewski took exception to an apparent dig from Wisconsin coach Bo Ryan, who in the aftermath of the Badgers' national championship game loss to the Blue Devils on Monday said, "We don't do rent-a-player."


Ryan threw out that zinger after his team lost to Duke, which could lose freshmen Jahlil Okafor and Justise Winslow to the NBA.

"I know as a coach, you're the first guy up there when you lose -- I've lost national championship games, I've been the loser," Krzyzewski said on ESPN Radio's The Herd with Colin Cowherd. "It's never easy. You can take one line out or a couple lines out without context. The line 'rent-a-player' is not a good line because -- use 'one-and-done' -- 'rent' could mean you're doing something illegal. There is a better choice of words for that. If you say, you don't do the one-and-done in your program, that's your right. But understand that everybody does it differently. ... There is more than one way to run a business, and just appreciate the expertise of all the people doing it in these ways."


In the Final Four semifinals Saturday, Wisconsin beat Kentucky, the team best known for one-and-done players under coach John Calipari, but Ryan made no mention of the culture where some players leave for the NBA after one year in college.


But Ryan was in no mood to toss bouquets after his team's 68-63 loss to Duke on Monday night. The Badgers were called for 13 fouls in the second half after getting whistled for two in the first, the biggest disparity between halves in a title game since at least 2004, according to Stats LLC.

"There was more body contact in this game than any game we played all year, and I just felt sorry for my guys that all of a sudden a game was like that. I think they are struggling with that a little bit," Ryan said in his postgame television interview.


Ryan had some time to cool off between his CBS interview and formal postgame news conference Monday night. Still, he couldn't resist commenting some more on the way the game against Duke was called.


"We missed some opportunities," Ryan said. "They hit some tough shots. But you know it's just a shame that it had to be played that way."


NCAA supervisor of officials John Adams on Tuesday acknowledged refs ruled incorrectlyon a play not mentioned by Ryan. Late in the game, Duke wrongly retained possession after Winslow was the last to touch a ball that went out of bounds. CBS replays clearly showed Winslow touching the ball. Officials reviewed the play, but Adams told Sirius XM satellite radio they didn't have access to the same video angle as CBS.


However, Dan Gavitt, NCAA vice president of men's basketball championships, told ESPN's Bob Ley on "Outside The Lines" on Wednesday that the officials had all the angles of the controversial play. Earlier Wednesday, CBS play-by-play television announcer Jim Nantz also said on the Dan Patrick Show that the refs did have access to all the replays that CBS showed of the out-of-bounds play. Nantz added that he believes that they made their call before they had the chance to see the last replay clip that clearly shows that Winslow touched the ball last.


Information from The Associated Press contributed to this report.