Mike Krzyzewski: Jahlil Okafor, Justise Winslow 'have a chance to be stars' 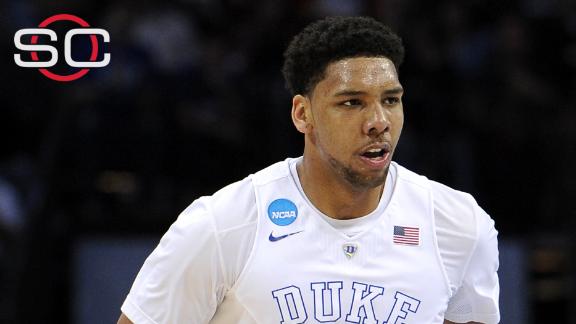 DURHAM, N.C. -- With the NBA draft just two days away, Mike Krzyzewski has neither insight nor interest in guessing where his former players, potential top pick Jahlil Okafor and likely lottery pick Justise Winslow, will end up.

But the Duke coach does have one prediction:

"Jah and Justise have a chance to be stars, really," he said during a sit-down interview at his office on Tuesday. "They really do."

Okafor, the consensus freshman of the year, is projected to go either first or second behindKarl-Anthony Towns on most draft boards, while Winslow is in virtually every top 10.

In an interview with ESPN Radio's The Herd with Colin Cowherd on Tuesday, Krzyzewski proclaimed Okafor the best player in the draft.

"He's going to be a high double-double guy in the pros. He's gifted. He's got feet and hands that you can't teach. He's got an attitude that's amazing. I think he's the best player in the draft," he said.

Krzyzewski has equally big expectations for Tyus Jones, his former point guard and the Final Four's Most Outstanding Player, who also declared early for the NBA.

"He's going to be that steady winner," he said, adding that he hopes Jones will go to a team with veterans to guide him. "That's what he does. He wins."

Krzyzewski has stayed in constant contact with his players since they left campus, mostly via text message. Just recently he spied a photo of Winslow on social media wearing a crown. Krzyzewski said he asked him what it was for and Winslow kiddingly texted back, "Very deserving."

"I reminded him not yet," Krzyzewski said. "And he immediately texted back, 'Yes sir.'"

Now three months removed from his fifth national title, Krzyzewski still marvels at his players' combination of humility and fearlessness, two skills he believes will serve them as well as their talent in their pro careers.

He recalled walking onto the court at Lucas Oil Stadium for the national championship game and, at the age of 68, taking in the enormity of it all.

And then after walking off, trophy in hand, he was amazed at the poise his players showed.

"What my mom gave me was unfailing love and unconditional support. I never felt I was going to fail, but how do you learn that?" he said. "I think that you feel it, and that's what happened to my guys. They were never afraid to lose."

Krzyzewski will be in New York this week, but not for the draft. Instead he will be on hand for the National Association of Basketball Coaches' presentation of its Court of Honor Award to John Thompson Jr.

He will meet later that evening with the Okafor and Winslow families for dinner, but said he prefers to stay away from the actual draft itself, worried he would detract attention from his players. Associate head coach Jeff Capel will be on hand in his place.

Both Okafor and Winslow will be in attendance in Brooklyn. Jones, Krzyzewski said, was invited but preferred to have a party at home in Minnesota.