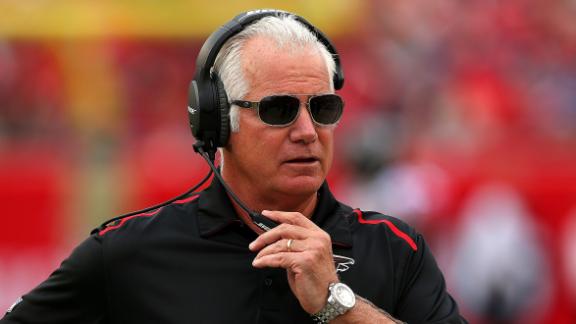 FLOWERY BRANCH, Ga. -- Atlanta Falcons coach Mike Smith indirectly admitted he made a mistake with a late timeout in Sunday's 26-24 loss to Cleveland -- a timeout that helped set up Billy Cundiff's game-winning 37-yard field goal for the Browns.

The blunder occurred with 55 seconds remaining with the Falcons facing third-and-2 from the Browns' 35-yard line. The Falcons could have kept the offense going and forced the Browns to call timeout. Instead, Smith initially said a timeout was called to make certain the right play call was made for third down.

The Browns then had 44 seconds and three timeouts to set up Cundiff's game winner.

Smith began his Monday news conference by addressing the issue.

"Before I open up for questions, I would like to address the last 55 seconds of the game. After reflecting and analyzing on how that played out, I would have done some things differently, given the opportunity to think about it through the night and doing some analyzing," Smith said. "I didn't do the things that needed to be done to put our guys in the best position to win the game. There's lot of plays in a football game that can affect the outcome, and I didn't do my best to help us win yesterday."

Smith was asked how difficult it was to realize his mistake.

"Again, you go through it and you make decisions and they're made on the fly, and it was a decision that didn't give us the best opportunity to win," Smith said. "And as a coach, it is your intention to always put your players in the best position to win. There were a lot of plays in that game, and it usually comes down to a handful of plays. And I didn't put the guys in the best position."

It was odd for the Falcons not to have a third-and-2 play ready, even despite the pressure of the moment.

"Again, guys, we wanted to get the best, what we felt like was the best play for us," Smith said. "Again, as I mentioned, I didn't do my job as the head football coach and put our guys in the best position that they possibly could be in in that situation. And it's my responsibility as the head coach to make sure that that happens."

Smith remains on the hot seat with the Falcons falling to 4-7 after the loss. Two of those losses have come down to late-game clock management. The Falcons had a similar issue in a 22-21 loss to the Detroit Lions in London.

But the Falcons could move back into a first-place tie in the NFC South if New Orleans (4-6) loses to Baltimore on Monday night. The Falcons are 4-0 in the division, including a 37-34 overtime win over the Saints.

Smith: I Didn't Put Falcons In 'Position To Win'
Eric Allen discusses Falcons' coach Mike Smith's admission that he made a coaching mistake in the final minute of Atlanta's loss to the Cleveland Browns.