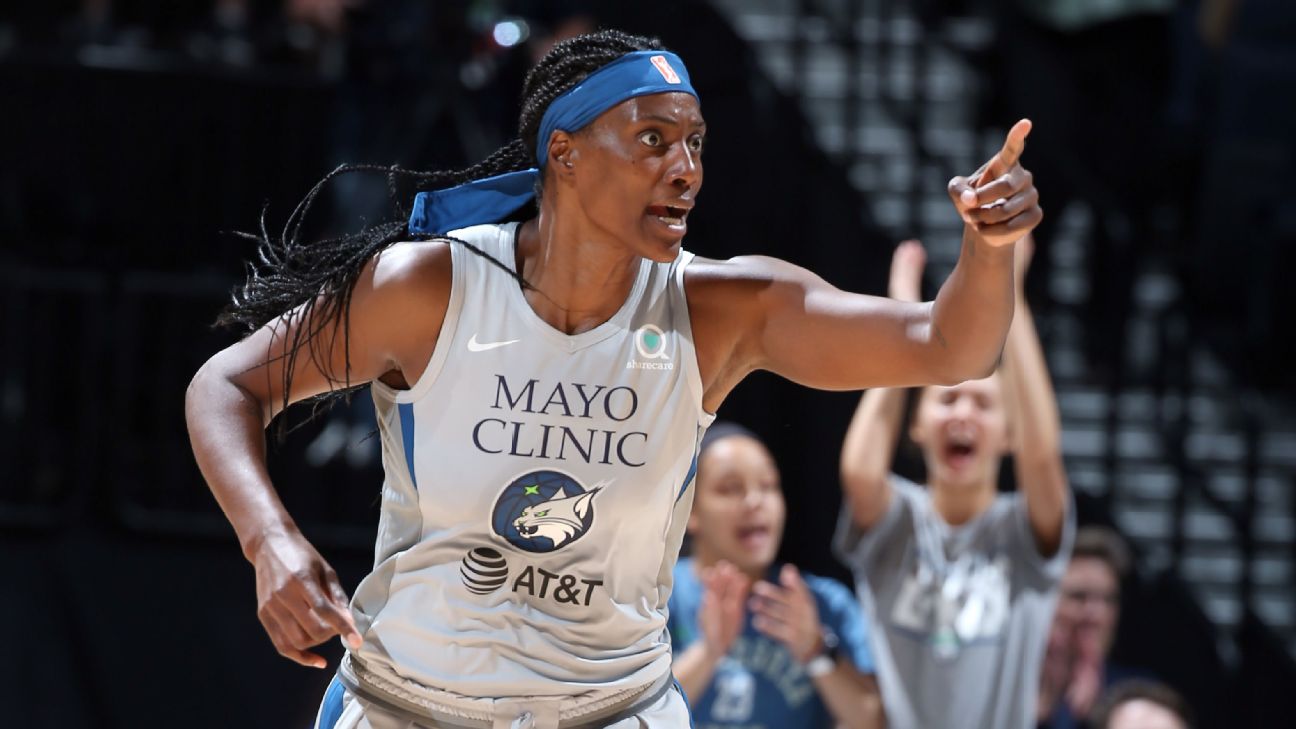 ESPN
By Mechelle Voepel
Los Angeles' Nneka Ogwumike smiled recently when asked about the heat of the rivalries with the teams closest to the Sparks: Phoenix and Las Vegas. "It kind of seems like everybody sees us as a rival," she said.

Perhaps so, but if there is another team that feels that way, it's Minnesota. And Lynx-Sparks has been the most intriguing rivalry in the WNBA over the past three years. They were, of course, the league's best two teams in 2016 (when the Sparks won their third title) and '17 (the Lynx got their fourth title). And even last year, when both had their struggles and they ended up meeting in the first round of the playoffs, each game they played had that air of something special.

The Lynx held on for a 58-56 victory over Phoenix on Thursday and are tied atop the league with Connecticut at 4-1. The Lynx's past and present will come together in an intriguing way Saturday, with the franchise retiring Lindsay Whalen's jersey. The other three of the original "core four" of Minnesota's first two title teams also are not in action now, with Maya Moore sitting out the season, Seimone Augustus sidelined after knee surgery and Rebekkah Brunson not on the roster (concussion).

Center Sylvia Fowles, the key player the Lynx obtained in 2015 who was so big a part of their other two titles, is still going strong while now being surrounded by a different cast. And if there's anyone who is suited personality-wise to deal with that, it's Fowles. She knows she has to be the steadying presence at all times, and she will be that. It doesn't mean she'll always be the leading scorer, but she'll always be a major threat the opponents have to key on.

Lots of eyes will be on Napheesa Collier, the latest in a long line of pro-ready UConn players able to make an impact in the WNBA as soon as they hit the floor. Collier has gone through some expected ups and downs through just five games in regard to when and where she gets her shots. That will continue to be a process.

But even against Dallas (1-of-7, five points) and Phoenix (2-of-7, four points), Collier didn't get flustered or start making other mistakes. The same calm determination we saw from her in college is going to serve her well, especially with how much playing time and responsibility she'll have as a rookie.

Former Sparks guard Odyssey Sims will have some spotlight on her, too, and one can assume the video clip of her getting fouled hard by Whalen early in Game 4 of the 2017 WNBA Finals will be unearthed. But bygones seem to be bygones; Sims has avoided the topic since coming to the Lynx via trade, and that's probably for the best. She knows she was definitely wanted (and needed) in Minnesota this season, so this has a chance to work out well for her and the Lynx.

Sims and fellow guard Lexie Brown carried the scoring load with a combined 27 points against Phoenix, and that will be a concern for the Sparks. Los Angeles had trouble stopping Connecticut guards Jasmine Thomas and Courtney Williams (combined 32 points) in Thursday's 89-77 loss to the Sun.

The Sparks have a new coach in Derek Fisher, whose philosophy on defense -- more individual responsibility -- is something to which they're still adjusting. Plus, Los Angeles is without Candace Parker and Alana Beard due to injury, and Maria Vadeeva, who is playing overseas. Riquna Williams, who had a hearing on her assault/burglary case in Florida on Thursday, did not play against the Sun.

The fact that Williams is with the Sparks at all this season while awaiting trial has been an understandable source of controversy. The WNBA has said it is investigating the case, but has allowed her to play. How this has been handled by the Sparks -- who re-signed Williams as free agent despite the charges against her -- and the league will be something new commissioner Cathy Engelbert should consider addressing when she formally takes over in July.

The Sparks' top weapons now are the Ogwumike sisters, with Nneka and Chiney averaging a combined 30.5 points and 17.8 rebounds. This is pretty much what we expected from them, and their chemistry is vital for a Sparks team that likely won't feel like it has solidified its identity for a while.

The Ogwumikes are going to be the emotional leaders for this team, as well as leading the team statistically. How they lead the Sparks on what will be an emotionally charged day of celebration for the Lynx this weekend will be interesting to watch, too.
Report a correction or typo
Related topics:
sportsespnwnbaminnesota lynxlos angeles sparksespnw sportsespnw
Copyright © 2020 ESPN Internet Ventures. All rights reserved.
More Videos
From CNN Newsource affiliates
TOP STORIES