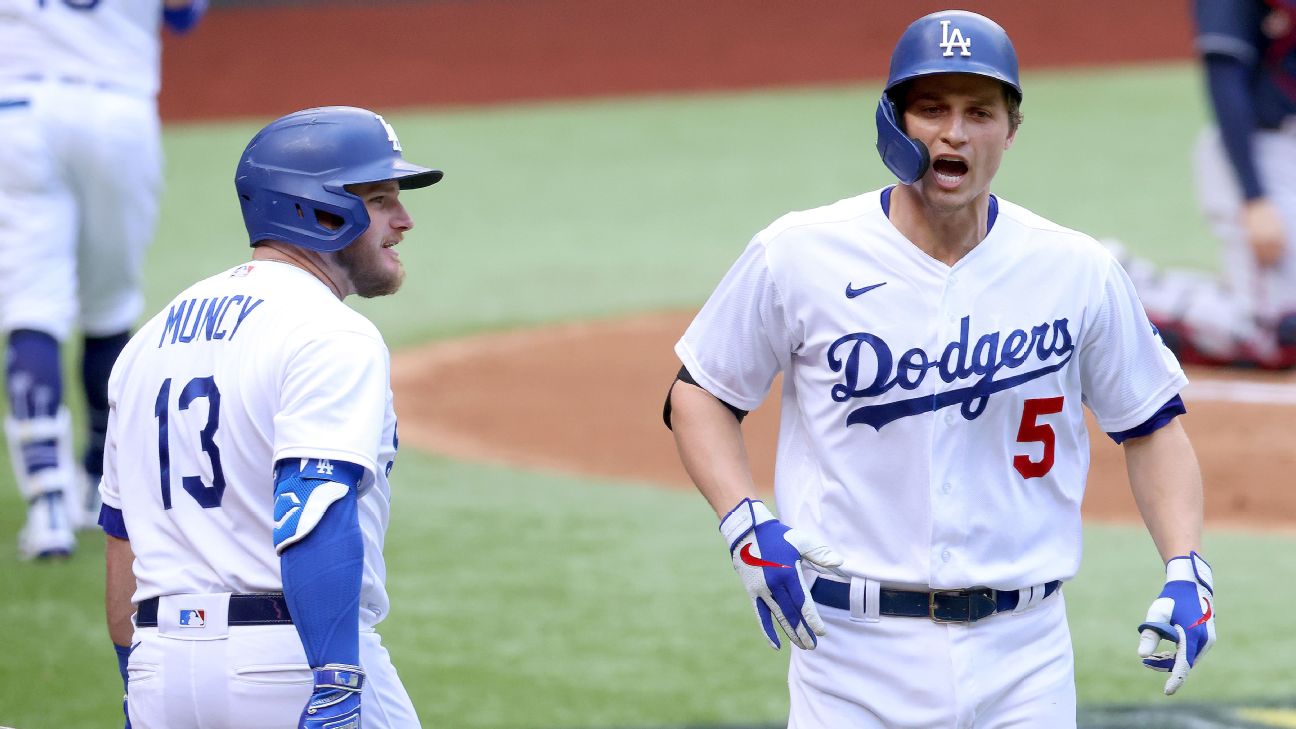 After going through an extra round of playoffs in the expanded postseason and being pushed to the limit in the league championship series, the top seed in each league has advanced to the 2020 World Series.

The Los Angeles Dodgers, who had the best record in baseball this year and haven't won it all since 1988, face the Tampa Bay Rays--who were the best team in the American League and have never won the Fall Classic -- in the World Series, which begins Tuesday night in Arlington, Texas.


Here's what makes this a series to watch, plus the odds, keys to victory and more.

The Dodgers have a 69.8% chance of winning the series.(Projections from ESPN's Bradford Doolittle.)

How they got here

Rays:Powered by a dominant pitching staff that features three potential aces in Blake Snell, Charlie Morton and Tyler Glasnow, Tampa Bay ran away with the AL East race and edged out theOakland Athleticsfor the league's best mark. Brandon Lowe was the only true offensive standout in a lineup that finished 12th in the majors with 289 runs scored and produced a team OPS of .753.

Dodgers:Once L.A. acquired Mookie Betts from theBoston Red Soxin February, the Dodgers became the odds-on World Series favorite. They did not disappoint, racing to a 43-17 record and posting a plus-136 run differential, both by far the best in baseball.

at Arlington, Texas; all times Eastern

Three reasons the Rays will win the series

1. Their pitching staff is more rested

To state the obvious, winning Game 7 against the Astros was the priority for the Rays. If that had failed, these words would not be necessary, and if Kevin Cash had to use every Rays pitcher from Nick Anderson to Dennis Quaid, he would have done it. But Cash didn't have to empty his pitching tank. With Charlie Morton, Anderson and Peter Fairbanks combining to shut down Houston on just 114 pitches, the Rays will begin the World Series after two days off with a rejuvenated pitching staff.

The Dodgers, of course, not only had to play on Sunday to finally overcome the Braves but their top two starters (Walker Buehler, blisters and Clayton Kershaw, back) both have physical clouds circling above. There's no reason to think that will definitely factor in to the World Series, but both are the kind of maladies that can resurface at inopportune times.

Even more important than the rest factor, I just like how the Rays' probable progression of starters sets up better than the Dodgers'. Cash might have ideas of his own, but if rotation usage during the postseason is any guide, then Tyler Glasnow should start Game 1 on five days' rest. His career ERA on four or fewer days of rest is 5.21; on five days or more, it's 3.57.

Game 4 goes to Ryan Yarbrough, most likely. By then, Yarbrough would have not pitched since Oct. 13. However, the long down period combined with the sudden influx of off days during the matchup means Cash can use Yarbrough in relief early in the series. And he might want to: The Dodgers' team OPS against soft pitches thrown by lefties this season is just .659, ranking 17th in the majors. The average pitch thrown by the southpaw Yarbrough this season has been just 81.4 mph.

Then it resets: Glasnow could go on normal rest in Game 5, Snell with five days' rest in Game 6 and, as mentioned, Morton if it comes down to a winner-take-all contest. Yes, when you get to the playoffs, the best-laid pitching plans usually go awry. But the off days built into the schedule also will benefit Cash's deep bullpen. He should have little reason to deploy one of his big three starters in anything but a traditional role during the Fall Classic.

There is a lot of intrigue about the Andrew Friedman-built Dodgers coming up against his original team in the Rays, built by an iteration of the front office for which he helped set the template. In some ways, that justifies the heavy favorite's status Los Angeles is likely to enjoy. After all, you take everything the Rays do to get an edge, transplant it to L.A. and combine it with the massive resources of the Dodgers. Just one example from back when teams got to have fans in attendance: You can take any three recent Rays season attendance totals, add them together and it's less than the typical one-season attendance count at Dodger Stadium.

You see the difference in resources when it comes to the star power on the Dodgers and the payroll that the likes of Mookie Betts and Clayton Kershaw command. However, the equalizer in this mismatch of resources can be found in the respective bullpens.

Think of the issues the Dodgers have had lately when it comes to sketching out the end of their games, as the closer/non-closer status of Kenley Jansen has taken on soap operatic proportions. The Rays, on the other hand, have several closers, and all of them are comfortable getting more than three outs, if needed. And they have that plethora of options not because Fairbanks or Anderson or Diego Castillo aren't good enough to be a ninth-inning saves guy. It's because they all are.

So in Game 7 against the Astros, Cash could summon Anderson -- one of the handful of best relievers in the game right now -- to take the ball from Morton in the sixth inning. Cash could do that because he had Castillo and Fairbanks, among others, in his hip pocket. And he didn't even have to use Castillo. -- Bradford Doolittle

Three reasons the Dodgers will win the series

1. They have the better offense

The Dodgers averaged 5.82 runs per game in the regular season to the Rays' 4.82. The Dodgers have star hitters up and down the lineup with no easy outs, in addition to good hitters on the bench. What they do better than any other team is wait for their pitch. Only the Yankees had a lower chase rate, and only the Astros struck out less often. This approach was best exemplified by the big home run Will Smith hit off Braves reliever Will Smith in Game 5 of the NLCS. Smith didn't swing at the first five pitches. On the sixth pitch, a fastball, he hit a three-run home run.

Meanwhile, the Rays led the majors in strikeouts and relied heavily on the red-hot Randy Arozarena in the ALCS. Arozarena hit .321 while the rest of the Rays hit .183. The Rays have relied very heavily on homers in the postseason to score their runs, with 71.9% coming via the home run as compared to 41.5% in the regular season. That's not necessarily a bad thing, as long as you hit a lot of home runs; but that's going to be a tough approach against a Dodgers pitching staff that had the second-lowest rate of home runs allowed in the regular season. Then you have to factor in that all seven games will be staged at Globe Life Field, which has played as a tough home run park.

2. They have the better bullpen

Wait ... what? OK, I know the Dodgers' bullpen wasn't completely lockdown in the NLCS, but here's a reminder that they had a 2.74 bullpen ERA as compared to 3.37 for the Rays. Maybe the Dodgers don't have one pitcher as statistically dominant as Nick Anderson, but Anderson has been scored upon in four of his seven postseason appearances. Plus, Kevin Cash mostly relies on three relievers -- Anderson, Diego Castillo and Peter Fairbanks -- in the biggest moments. The second tier of relievers -- Ryan Thompson, John Curtiss, Aaron Loup -- don't throw as hard and are vulnerable.

The Dodgers, meanwhile, go seven or eight deep in quality relievers, and that's before factoring in that they might use just four starters with the two off days, so they could move Dustin May or Tony Gonsolin to the pen. With the Rays' mix-and-match lineup, it's also a big key that the Dodgers have two power lefties in Jake McGee and Victor Gonzalez, so Dave Roberts will be able to match up depending on where the Rays are in the lineup. Perhaps most importantly, it appears that Kenley Jansen has regained his mojo, allowing Roberts to plan on him for the ninth inning and use the relievers accordingly.

No, nothing scientific in this analysis. The Dodgers have been a great team for a long time now, with eight straight division titles. You wonder if coming back from that 3-1 deficit against the Braves actually helps remove some of the added pressure. A few days ago, they were down and out, one loss away from another disappointing end to a season. And now they're in the World Series. It's almost like bonus baseball.

Clayton Kershaw is lined up to start Game 1, and here's a little suggestion: Don't start him on regular rest in Game 5. That's been a problem game for him in his two previous World Series. In 2017, he was great in Game 1, then allowed six runs in Game 5 (Astros cheating noted). In 2018, he wasn't great in either start but allowed three home runs in Game 5 to the Red Sox. The Dodgers have the luxury of five good starters, a deep bullpen and two off days. Throw in Kershaw's back issue that forced him to move a start back in the NLCS and giving him a couple of extra rest days before a potential Game 6 start makes sense. That would still allow Walker Buehler to go in Game 3 and then Game 7 on regular rest.-- David Schoenfield 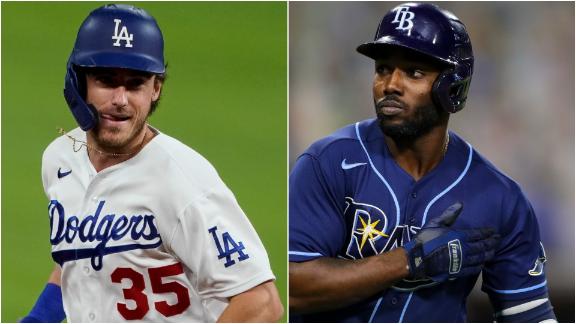 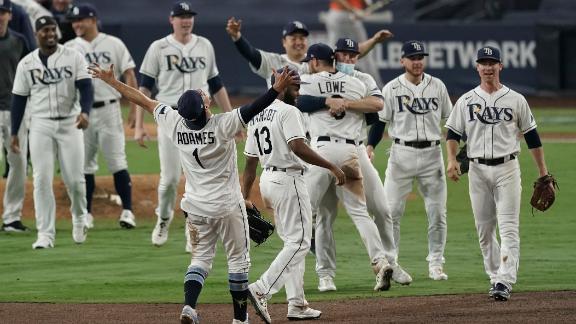 Rays advance to World Series for first time since 2008
Aledmys Diaz pops out to right field for the final out as the Rays celebrate finishing off the Astros 4-2 in Game 7 of the American League Championship Series.
Report a correction or typo
Related topics:
sportsespnmlbtampa bay raysdailylos angeles dodgers
Copyright © 2021 ESPN Internet Ventures. All rights reserved.
More Videos
From CNN Newsource affiliates
TOP STORIES