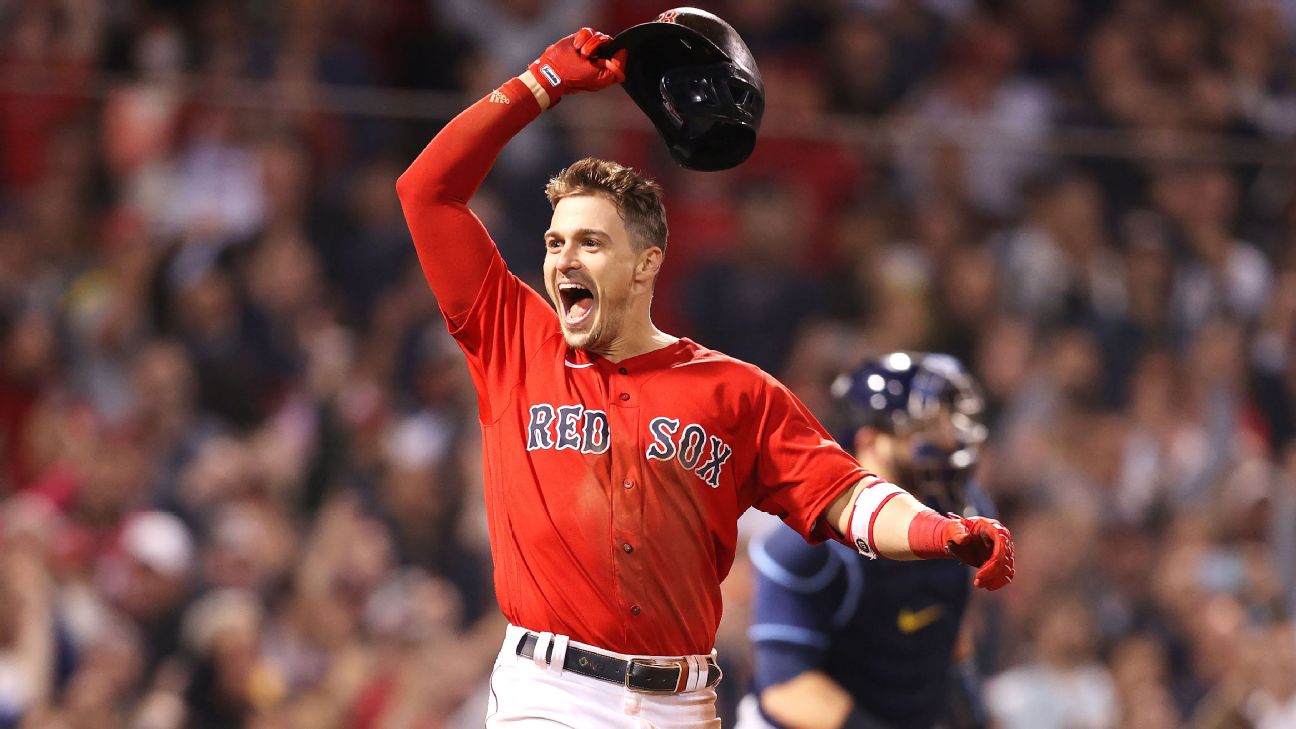 To catch you up, the Boston Red Soxclinched a spot in the ALCS with a 6-5 win over theTampa Bay Rays. On the off chance Red Sox fans needed more reason to celebrate after a second straight walk-off win, Boston -- who finished last in the AL East in 2020 -- is the fourth team to advance to the ALCS the season after finishing at the bottom of their division. The last team to do so? The 2013 Red Sox, who won the World Series. It has to be a good omen.


While the other AL division series between the Chicago White Soxandthe Houston Astroswas postponed due to weather, the Astros have a chance to secure their berth with a win on Tuesday.

In the NLDS, the Atlanta Braves got Monday's action going with a 3-0 victory over the Milwaukee Brewers (Atlanta leads 2-1). Then the San Francisco Giantstook a 2-1 series lead over the Los Angeles Dodgersafter an elite pitching battle.

Here are the best moments and biggest takeaways from Monday's games:

Whether it's the Braves' pitching, the Brewers' hitting or, most likely, a combination of both, the bottom line is the same: Milwaukee must figure out some way to generate some offense, or its season will end with Game 4 on Tuesday.

All three games in the Atlanta-Milwaukee division series have followed the same script. The starting pitchers for both sides put up zeros, the bullpens mostly do their jobs and the outcomes are determined by one or two key offensive sequences. The Braves converted their best scoring opportunity in Monday's Game 3, the Brewers did not, and Atlanta grabbed a 2-1 lead in the series with a 3-0 win.

Milwaukee starter Freddy Peralta and Atlanta counterpart Ian Anderson both were dealing in the early innings, and both were removed for pinch hitters in the fifth inning, because their teams both put two runners on base and runs have been oh-so-hard to come by in this series.

While the Brewers' second-and-third, one-out threat in the top of the fifth fizzled, the Braves' two-on, none-out surge in the bottom of the fifth did not, as Atlanta manager Brian Snitker was able to exploit what has emerged as a highly favorable matchup for Atlanta.

In Game 1, Adrian Houser, working in relief, gave up a solo homer to pinch hitter Joc Pederson in the late innings, the only run the Braves scored in that contest. With two runners on, Anderson due up and Houser again on in relief, Snitker sent Pederson up again. And, again, it worked: Pederson clubbed a three-run, pinch-hit bomb to right field that accounted for the only scoring in the game.

So here we are, three games in, and the Brewers have scored two runs total in the series. Over their last seven postseason games, Milwaukee has gone 1-6 and scored a total of eight runs in those seven games. It's a nasty trend for the Brewers, one that they have about 24 hours to curb or else their season will come to a very quiet end. --Bradford Doolittle

According to ESPN's Stats & Information, the Braves are now 6-3 in the postseason at Truist Park (opened in 2017), winning four straight dating back to 2019.

Atlanta will seek to close out the NLDS having lost 10 of their last 13 potential series-clinchers since losing the 1999 World Series.

The Brewers and Braves have arrived in style.

Maybe it's the months spent inside during COVID quarantine. Maybe it's that the Red Sox find themselves back in the playoffs after posting one of the worst records in baseball during the 2020 season. Maybe it's the division rivalry playoff games against the Yankees and the Rays that elicited the rowdy bleacher chants, but few around Fenway Park can remember an atmosphere this loud and enthusiastic as the audience the Red Sox played in front of in Boston during this playoff run.

With the roar of a Marathon Monday crowd behind them, Boston advanced to the ALCS with a 6-5 win over the Rays on Monday night. The Red Sox took the lead early in the game in the third inning behind aRafael Deversthree-run homer, anAlex VerdugoRBI double and an RBI single from designated hitterJ.D. Martinez. While the Rays chipped away at the score in the fifth inning with an RBI fromAustin Meadowsand a sixth-inningWander Francohome run, even tying the score in the eighth, the Red Sox rallied yet again, with a Kiké Hernandez walk-off sacrifice fly in the bottom of the ninth inning.

Players on both the Rays and Yankees admitted the effect of the crowd on the game. The sentiment from those around the team -- from the Fenway Park security guards to the players to the coaches to the front office executives -- remained the same across the board: The crowds in Boston are at another level this postseason, a near-legendary status.

Boston advanced past the Rays thanks to Enrique Hernandez driving in the go-ahead run via a sac fly.

Tampa Bay found its groove in the 8th and pulled even with Boston thanks to a pair of timely bats.

A home run in the 6th by rookie shortstop Wander Franco drew the Rays closer to the Red Sox and joined him with some distinct company.

Boston appears quite committed to keep Devers' moving in the right direction.

The Red Sox took control in the third inning beginning with a 3-run homer by Rafael Devers. Alex Verdugo drove in Xander Bogaerts via double before scoring his own run to give Boston a 5-0 lead.

Hunter Renfroe didn't take long to get fans on their feet with this web gem.

Brandon Crawfordattended UCLA, but he grew up in the Bay Area, rooted hard for the San Francisco Giants and was one of few members in this matchup who truly understood the significance of his team's first-ever postseason meeting with the Los Angeles Dodgers.

Crawford, speaking hours before the start of quite possibly the most anticipated National League Division Series in baseball history, smiled when asked about his feelings towards his opponent.

"I was taught at a young age to not like them."

Four days later, Crawford helped push one of the most talented teams in Dodgers history to the brink of elimination. His leaping catch in the bottom of the seventh, with two outs and two on, robbedMookie Bettsof a rare hit on a windy night when neither team could muster much offense. It pushed the Giants to a 1-0 victory and a 2-1 Series lead, presenting them with an opportunity to advance into the NL Championship Series with another victory on Tuesday night.

Betts' line drive was hit 100.4 mph and carried an expected batting average of .870. It was one of 13 batted balls that traveled at least 100 mph. Only one -- Evan Longoria's solo homer in the fifth inning -- resulted in extra bases.

Max Scherzer, one of the leading contenders for another NL Cy Young Award, had allowed 11 runs in 14 2/3 innings over his prior three starts. But he made an adjustment with his lower half in recent days, and it showed up through a seven-inning, 10-strikeout performance in which he gave the Dodgers every opportunity to advance. His offense, however, couldn't come through, a major concern as this promising Dodgers season reaches a breaking point.

The Dodgers have been shut out twice in this series, in Games 1 and 3. In between, they compiled nine runs. But before that, they struggled mightily to score against the St. Louis Cardinals in the NL Wild Card Game. The last hitter of Tuesday's game, pinch-hitterGavin Lux,scorched a 106.9 mph line drive to center against the young, electricCamilo Doval. Off the bat, it felt as if it might carry over the fence. But winds that traveled roughly 15 mph throughout the night knocked the baseball down, resulting in a harmless flyout.

It was that kind of night. -- Alden Gonzalez

Evan Longoria put San Francisco on the board with his 10th career postseason homer. It marks his first since Game 3 of the 2013 ALDS with the Rays. 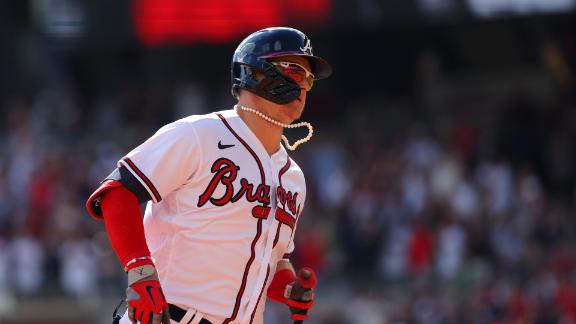