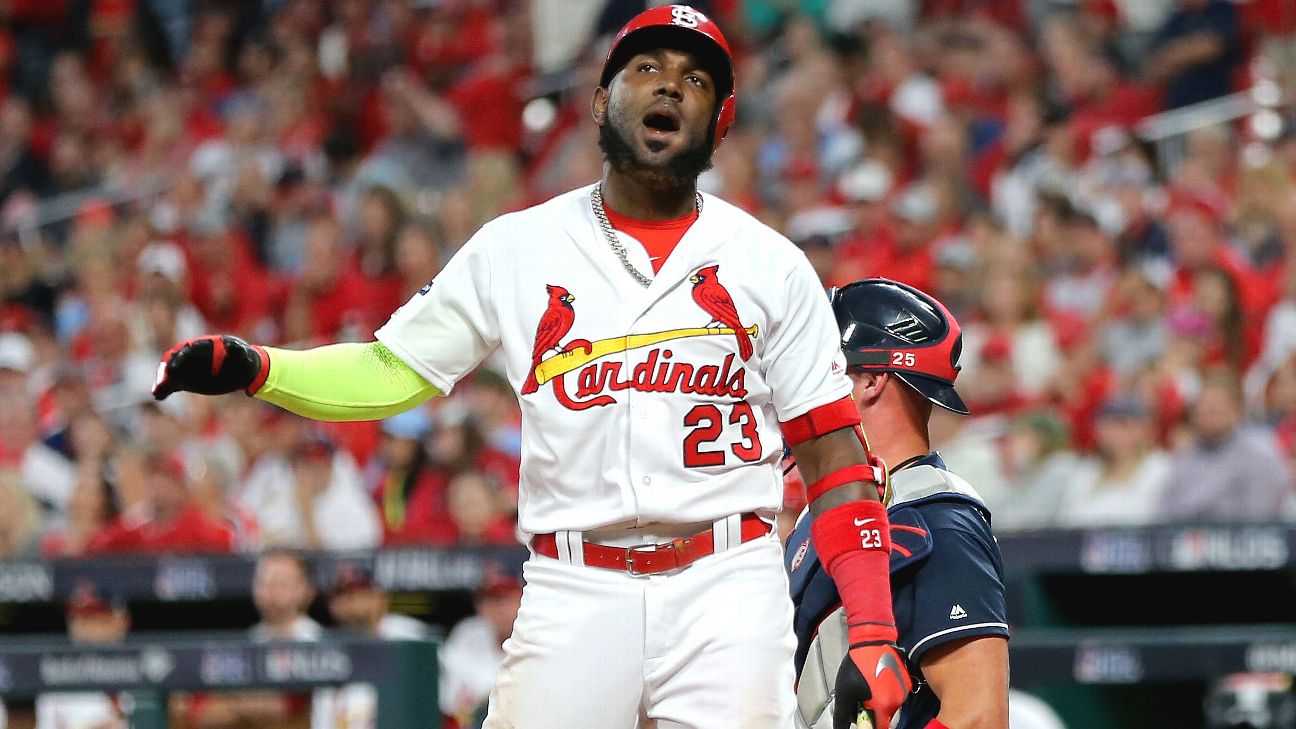 It's another four-game whirlwind, with the stakes even higher than they were for Friday's MLB playoffs quadruple-header. Buckle up!

The most important thing of the day:Four teams -- theTampa Bay Rays, St. Louis Cardinals, Washington Nationals and Minnesota Twins-- are playing for their postseason lives. By the end of the night, the intensity could be turned up in all four series, with both NL matchups potentially in line for winner-take-all games. Or the divisional round could be over, just like that, kaput. Or we will end up somewhere in between.

The view from inside the ballparks

ST. PETERSBURG, Fla. -- There is a lot of anticipation for the Rays' first playoff game at Tropicana Field since 2013. Ticket demand has been so strong that the Rays are removing some of the tarps that usually cover the unused upper-deck seats. But even with tough Charlie Morton on the mound, Tampa Bay will have to combat a Houston team that is both loose and focused. The Astros want to close this thing out and align their rotation for the looming showdown with the Yankees.-- Bradford Doolittle

ST. LOUIS -- The Cardinals might very well be devastated -- and finished in the series -- by their ninth-inning meltdown on Sunday, but they have the pitching edge in Game 4. Dakota Hudson will face a piecemeal staff in which Max Fried has pitched in all three games and Dallas Keuchel will be on three days' rest. A team that was 50-31 at home in the regular season can also take solace in that for 8 innings, it led in Game 3.-- Jesse Rogers

WASHINGTON -- By the end of Sunday night, Nationals Park, once full and raucous, sat half-empty and nearly silent. The Dodgers' seven-run sixth-inning blitzkrieg took a series teetering on tenuous and delivered the edge back to the two-time defending National League champions. Now comes the real test: Beat Max Scherzer in Game 4, and if that fails, head back to Dodger Stadium with the indomitable Stephen Strasburg pitching for the Nationals.--Jeff Passan

MINNEAPOLIS -- Teams that win the first two games of a best-of-five postseason series have gone on to win the series 88% of the time, and it seemed that the Yankees who showed up at Target Field for a light workout Sunday had read the game notes. They took batting practice -- more like "Bombas" practice -- playfully competing in a makeshift Home Run Derby. Maybe that's a preview of what's to come on Monday? Meanwhile, the Twins know that their backs are against the wall, but reliever Trevor May summed it up quaintly. "We got punched in the mouth a couple times in New York," he said, "but the thing about it is we have pride to punch back." -- Marly Rivera and Joon Lee

A stat to impress your friends:The Braves will enter Monday's Game 4 holding a 2-1 series lead, which will snap a 31-game postseason streak in which they played without holding a series lead. That is the longest streak of its kind in MLB history.

It'll be a heartbreaker for the Rays behind a game Morton, but Houston is squarely pointed toward what comes next. Astros 3, Rays 2.-- Doolittle

So they get mowed down by Justin Verlander and Gerrit Cole, and with the season on the line, all the Rays have to do is beat a future Hall of Famer in Zack Greinke. They might be relieved to face some fastballs they can actually see, and Charlie Morton will step up to beat his former teammates. Rays 4, Astros 3--David Schoenfield

The Cardinals won't go down easy, though they'll have to figure out that ninth inning if it comes to it. So might the Braves, though, as Mark Melancon has pitched in all three games. Cards 4, Braves 2.-- Rogers

For St. Louis, this series seemed to rest on getting back to Jack Flaherty for a Game 5, but Carlos Martinez's meltdown and Mike Shildt's ill-conceived intentional walk mean the Cards have to win to stay alive. They won't. Braves 5, Cardinals 3-- Schoenfield

An extra day of rest energizes Scherzer and sends the series to L.A. for a win-or-go-home donnybrook. Nationals 2, Dodgers 1. --Passan

I am not going to bet against Max Scherzer, even if he hasn't really been Scherzer in the second half (though he dominated in his one-inning relief stint in Game 2). He pitches great, and a late Dodgers rally falls short. Nationals 6, Dodgers 4-- Schoenfield

The ghosts of postseasons past will continue to haunt the Twins. I believe Luis Severino will pitch a solid five innings before handing the ball to the Yankees' elite bullpen. There will a few "bombas," and the Yankees will complete the sweep. Yankees 7, Twins 5.--Rivera

Please, Twins, give us a series, and end that playoff losing streak. On the bright side, Jake Odorizzi had a 2.89 ERA in his previous 10 starts (and just two home runs allowed). He has also had a tight hamstring, and the Yankees aren't exactly the Tigers or Royals. Yankees get the sweep. Yankees 6, Twins 4--Schoenfield

Stud of the night:With all the star power in the Dodgers-Nationals series, who would have picked 36-year-oldRussell Martin(.220/.337/.330 this season) to be at the center of the most important outburst of the L.A. offense this season? Martin's two-run double sparked a seven-run sixth inning for the Dodgers, and the veteran backstop tacked on a two-run homer in the ninth for good measure.

Dud of the night:Cardinals closer (at least for the time being)Carlos Martinez. Brought on to protect a 1-0 lead, Martinez seemed almost distracted ingiving up three runs on three hits and two walks -- one intentional. He appeared to blow a kiss to Atlanta's Billy Hamilton as he led off second base moments before yielding a tying double to Dansby Swanson. Then, after Atlanta went up 3-1, Martinez brushed back Ronald Acuna, picking an odd time to make that sort of statement.

Highlight of the night:

Quote of note:"Gotta play to win the game. Everybody felt like that was the best matchup, including the guy on the mound. Took our shot. Didn't make a pitch, and [Swanson] made him pay." -- Cardinals manager Mike Shildt on his decision to intentionally walk Brian McCann with two outs in the ninth to pitch to Dansby Swanson, who hit a game-tying double

Best of the playoffs so far ...

Our running postseason MVP:We said it was Verlander's title to lose after he became a verb by blanking the Rays for seven innings in Game 1. But after Cole's 15-strikeout tour de force in Game 2, it looks like the two Astros aces are co-MVPs.

The play of this October: Juan Soto's single/Trent Grisham's error with two outs and the bases loaded in the eighth inning of the NL wild-card game, which turned a 3-1 deficit into a 4-3 Washington lead. Unfortunately for Grisham, the play will be part of those postseason blunders lists -- and it could take on a life of its own if the Nationals end up winning it all.

Game of the postseason so far:Braves-Cardinals Game 3. An old-school pitchers' duel between Mike Soroka and Adam Wainwright had Atlanta down 1-0 entering the ninth. With St. Louis one out from taking a 2-1 series lead, the Cards intentionally walked Brian McCann,Dansby Swanson ripped a double to tie it, and pinch hitter Adam Duvall followed with a two-run single that gave the Braves a 3-1 win. 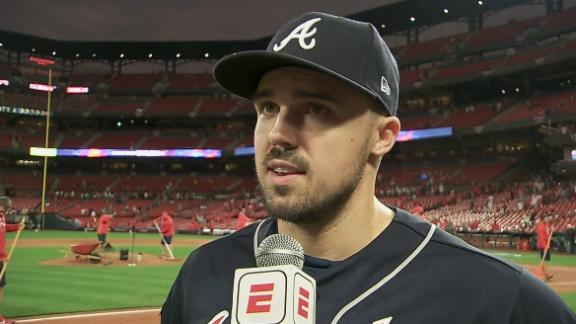 Duvall knows Game 4 is a 'must win'
Adam Duvall talks about his mentality stepping up to the plate in the ninth inning and what the next game holds. 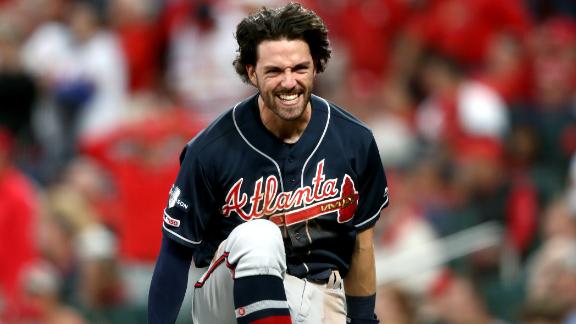