Nats take Mariano Rivera Jr. in 4th round; other notable names off board 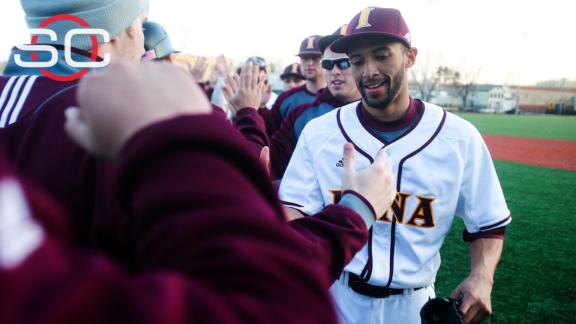 Iona College right-hander Mariano Rivera III, son of the former Yankees closer, was drafted in the fourth round with the 134th overall pick Tuesday by the Washington Nationals.

Rivera was 5-7 with a 2.65 ERA and a school-record 113 strikeouts with 27 walks in 85 innings this season for the Gaels, while also being selected the Metro Atlantic Athletic Conference's pitcher of the year.

"I just think it's fantastic," Nationals manager Matt Williams said before his team faced the Yankees in the Bronx on Tuesday night. "I know there's a proud papa, for sure."

While his famous father saved a major league-record 652 games, the younger Rivera -- technically Mariano III, but often called Mariano Jr. by friends and family -- has been a solid college starter with six complete games, including three shutouts.

Rivera III was drafted in the 29th round by the Yankees last year, but opted to return for his junior season.

"Obviously, he comes from a great baseball background," Yankees manager Joe Girardi said, adding that it's "a big day for the young man and for 'Big Mo.' "

While he doesn't have the devastating cutter that made his father so dominant during a 19-year career, the younger Rivera has a fastball that hits the mid- to upper-90s consistently, along with a solid curve and slider.

He bears a striking resemblance facially to his father, although the 21-year-old Rivera takes a smaller frame to the mound at 5-foot-11 and 155 pounds; the elder Rivera was 6-2, 195.

Rivera wasn't the only player with baseball bloodlines taken during the second day of the draft. Missouri State outfielder Tate Matheny, son of St. Louis manager Mike Matheny, was drafted by Boston early in the fourth round.

Matheny, a 23rd-rounder by the Cardinals out of high school in 2012, hit .291 with five homers and 43 RBIs for the Bears this year, along with a team-leading 12 stolen bases.

Michigan State outfielder Cam Gibson, son of 1988 NL MVP Kirk Gibson, was drafted in the fifth round by Detroit -- the team that drafted the elder Gibson with the No. 12 overall pick in 1978. Cam Gibson was drafted in the 38th round by Arizona in 2012 while Kirk was managing the Diamondbacks, but opted to go to Michigan State, where his dad also played his college ball. He hit .294 and had 17 stolen bases in 57 games for the Spartans this season.

Among other notable selections was Texas drafting Duke right-hander Michael Matuella, who had Tommy John surgery in April, early in the third round. Matuella was considered a candidate for the No. 1 overall pick entering the season. He took to Twitter to show his excitement.

Right-hander Jacob Nix was taken by San Diego in the third round with the 86th pick after failing to sign with the Astros, who drafted him in the fifth round last year. Nix's deal, which included a big slot bonus, came off the table after Houston's agreement with No. 1 overall pick Brady Aiken fell apart. Aiken also failed to sign, and was drafted No. 17 overall by Cleveland on Monday night.

The draft started Monday night with the first two rounds, and runs through Wednesday, when rounds 11- 40 will be held via conference calls with all 30 teams.