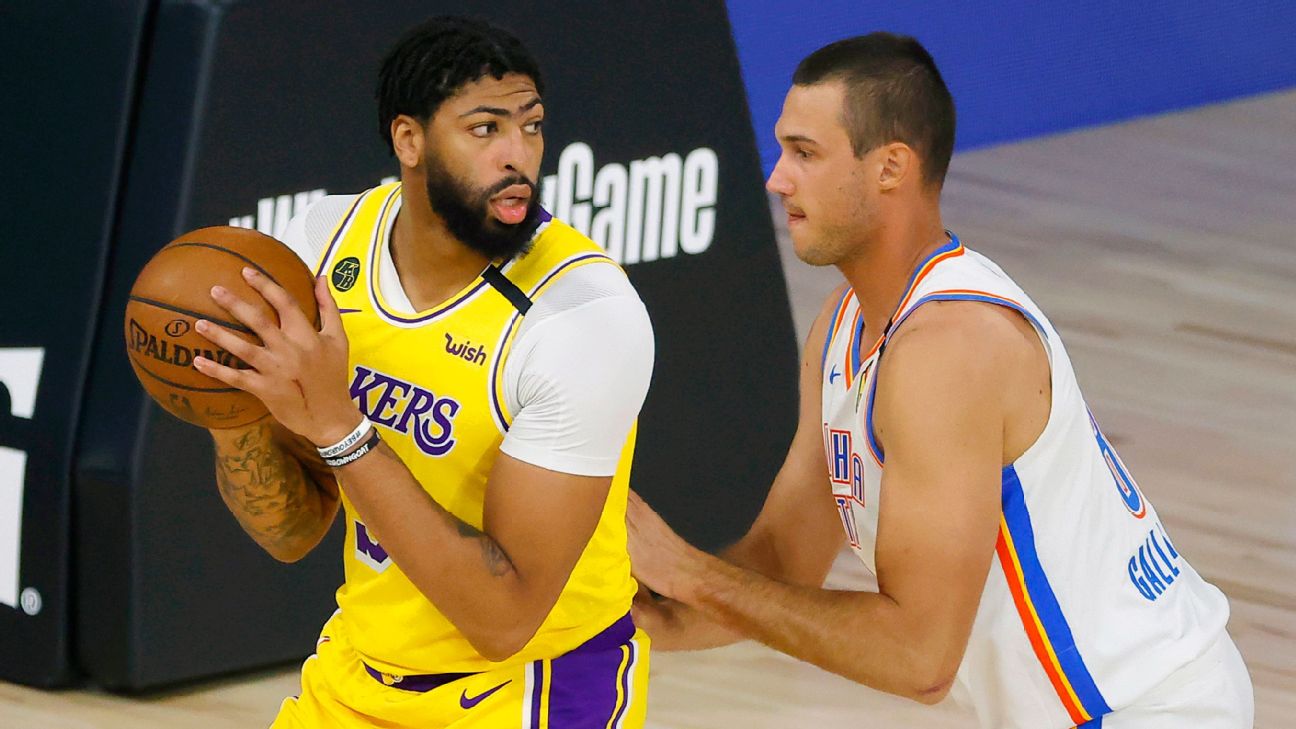 It didn't take long to see the Los Angeles Lakers weren't quite carrying a sharp focus or high intensity on Wednesday against the Oklahoma City Thunder. The plan was to approach it like any other regular-season game, though they already clinched the West's No. 1 seed a few days ago.

Still, the Lakers' 105-86 thumping at the hands of the Thunder on Wednesday in Lake Buena Vista, Florida, punctuated the primary issue they've dealt with so far in the bubble. They're the only team in the NBA restart averaging fewer than 100 points per game. They are dead last in offensive rating at 96.6, and by a pretty wide margin (the Pelicans are second-to-last at 102.3).


Asked if he would be concerned if this is where the Lakers were for the opening of the postseason, coach Frank Vogel was blunt and to the point.

"Clearly. Yes," he said. "We've got to be playing better offensively than we're playing right now."

The Lakers have four seeding games remaining before the playoffs. The focus will be on maintaining health, first and foremost, but there is a growing priority on building better chemistry for the rotation -- and potentially a starting lineup change.

At the core, though, the offensive problem isn't nearly as complicated as it might appear. And not as worrisome, either. LeBron James and Anthony Davis simply haven't played to their usual standard. The duo shot 10-of-30 against the Thunder, their lowest combined field goal percentage as teammates, according to ESPN Stats & Information research. Their previous low: their opening game of the restart, against the Clippers.

"This is a totally different situation than any other situation that I've been in in my career, so I have zero experience with having the No. 1 seed inside of a bubble during seeding games playing in August," James said.

In a macro sense, the bubble has gone according to plan for the Lakers. The No. 1 seed is a box checked, but the focus is clearly shifting.

"We'll continue to try to strike that balance each day between being fresh," Vogel said, "being healthy, being in shape and being in rhythm." -- Royce Young

Here's the latest on the standings, the games to watch Thursday, plus everything you need to know. Check back here for highlights and updates throughout the day.

The Lakers are the only NBA team averaging under 100 points per game since the restart. LeBron James received a technical foul from the bench as frustrations bubbled over in Wednesday's loss to the Thunder. -->

The injury occurred after a hard foul by Raptors point guard Kyle Lowry prevented a dunk and caused Gordon's left leg to extend high as he was falling. After a review, Lowry's foul was upgraded to a flagrant foul 1. Gordon and Lowry exchanged words during the review.

With one of the most open NBA postseasons in years, there's no clear title favorite right now, but the LA Clippers picked up one big endorsement: Kevin Durant's.

"If I had to choose -- and I hate doing that s--- because you never know what could happen, you seen that with us last year -- but if I had to choose, I'll go with Clippers and Bucks for the championship," Durant said on the "Play For Keeps" podcast. "And I'll go with the Clippers."

Lil Wayne cheers on the Lakers

Students from the I Promise School, an elementary school in Akron, Ohio, supported by the LeBron James Family Foundation, also showed up as virtual fans.

Denver Nuggets forward Michael Porter Jr. followed up his 37-point game on Monday by scoring 30 points Wednesday against the San Antonio Spurs, setting a Nuggets record for most points by a rookie in a two-game span. The previous mark was 66, shared by Carmelo Anthony and Hall of Famer Dikembe Mutombo. Porter is the fourth rookie over the past 30 seasons with 30 points and 10 rebounds in consecutive games, joining Blake Griffin, Shaquille O'Neal and Lionel Simmons.

Philadelphia 76ers guard Ben Simmons left Wednesday's game against the Washington Wizards in the third quarter with a left knee injury. The team announced that he would not return.

Jazz, Grizzlies throw it back

If you long for the days of Greg Ostertag battling in the post with Bryant "Big Country" Reeves, the Jazz and Grizzlies had a treat for you Wednesday! Both teams wore throwback jerseys for their afternoon showdown in the bubble, giving the game a very "I Love the '90s" feel.

The Nets clawed their way into the No. 7 seed in the Eastern Conference after beating the Milwaukee Bucks on Tuesday. Both the Nets and Magic lost on Wednesday, extending the Wizards' play-in chances by another game.

Over in the West, the Phoenix Suns are the conference's only undefeated team in the bubble, and they will look to climb the standings Thursday against the only other team yet to lose in Florida, the Indiana Pacers.

The Pelicans and Kings were set to take the court on March 11 -- the night play was suspended in the NBA -- but the game was ultimately postponed just minutes before tipoff because a referee assigned to the game had also been assigned to a Utah Jazz game days before (and thus had come into contact with Rudy Gobert). This is the first of two meetings between the teams in the bubble; they are also set to face off on Tuesday.

The Pelicans will be led by All-Star Brandon Ingram and rookie Zion Williamson, who combined for 47 points in New Orleans' only victory in the bubble, over Memphis on Monday. Meanwhile, the Kings have dropped all three games they've played and find themselves at the back end of the six-team race for the final playoff spot in the Western Conference. -- Andrew Lopez

The Bucks are looking to get back on track after back-to-back losses -- a close defeat to the Houston Rockets and then another to the Brooklyn Nets, although Giannis Antetokounmpo and Khris Middleton didn't play in the second half against the Nets. However, both are expected to get back to their normal minutes Thursday against Miami.

The Heat, meanwhile, could be without guard Jimmy Butler, who missed Tuesday's game because of a sprained right ankle. The injury isn't thought to be serious, but his status for Thursday is unknown. The matchup to watch here will be Antetokounmpo against Heat center Bam Adebayo. When the teams met on March 2, Adebayo was pivotal in holding Antetokounmpo to 13 points, tied for his season low, on 6-of-18 shooting. -- Lopez

Both teams here are jockeying for position in their own ways. After a clutch performance by Carmelo Anthony on Tuesday, Portland finds itself 1 back of the eighth seed in the Western Conference playoff race. Meanwhile, Denver is holding its own as it attempts to wrestle the second seed away from the LA Clippers, potentially earning the right to avoid a matchup with the Lakers until the conference finals. Denver has had held the upper hand over Portland this season, picking up victories in the first three matchups by an average score of 116.3-99.3. Denver is one of only two teams (Clippers) to hold Portland under an average of 100 points this season. -- Lopez

As expectations evolve for Boston, the Celtics' final form will be molded by Jayson Tatum and Jaylen Brown.

An uneven start in the NBA bubble has revealed this West dark horse is still in the early stages of learning how to win.

Our NBA experts weigh in on the biggest trends after the first weekend of basketball.

Toronto remains horribly under the radar in this year's title race. That needs to change. 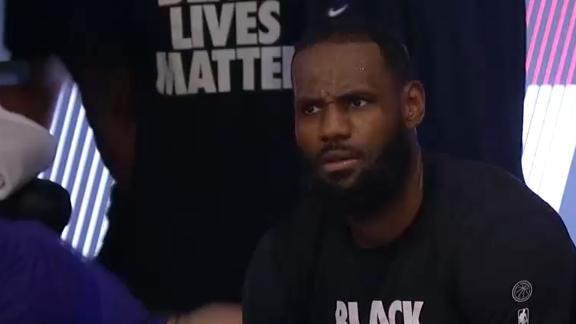 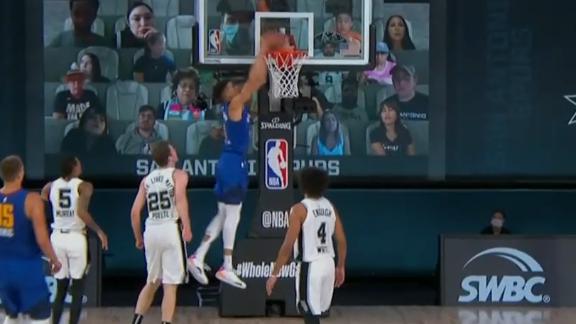 Jokic feeds Porter for dunk
Nikola Jokic passes to Michael Porter Jr., who finishes with a two-handed flush for the Nuggets. 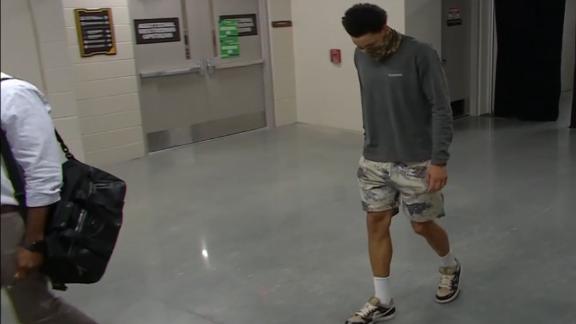 Simmons walks gingerly out of arena
After exiting the Sixers' game vs. the Wizards with a knee injury, Ben Simmons is seen walking slowly out of the arena. 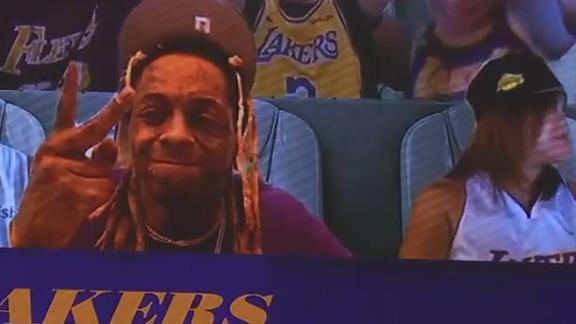 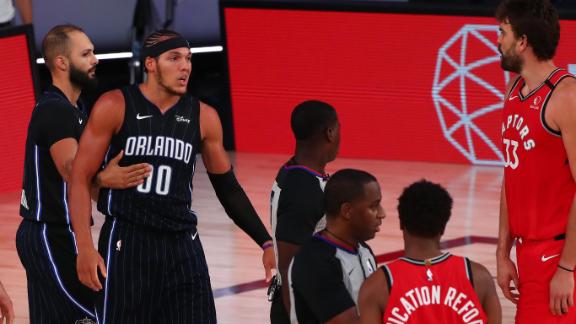