NBA Christmas Day schedule -- How to watch, coverage of all five games 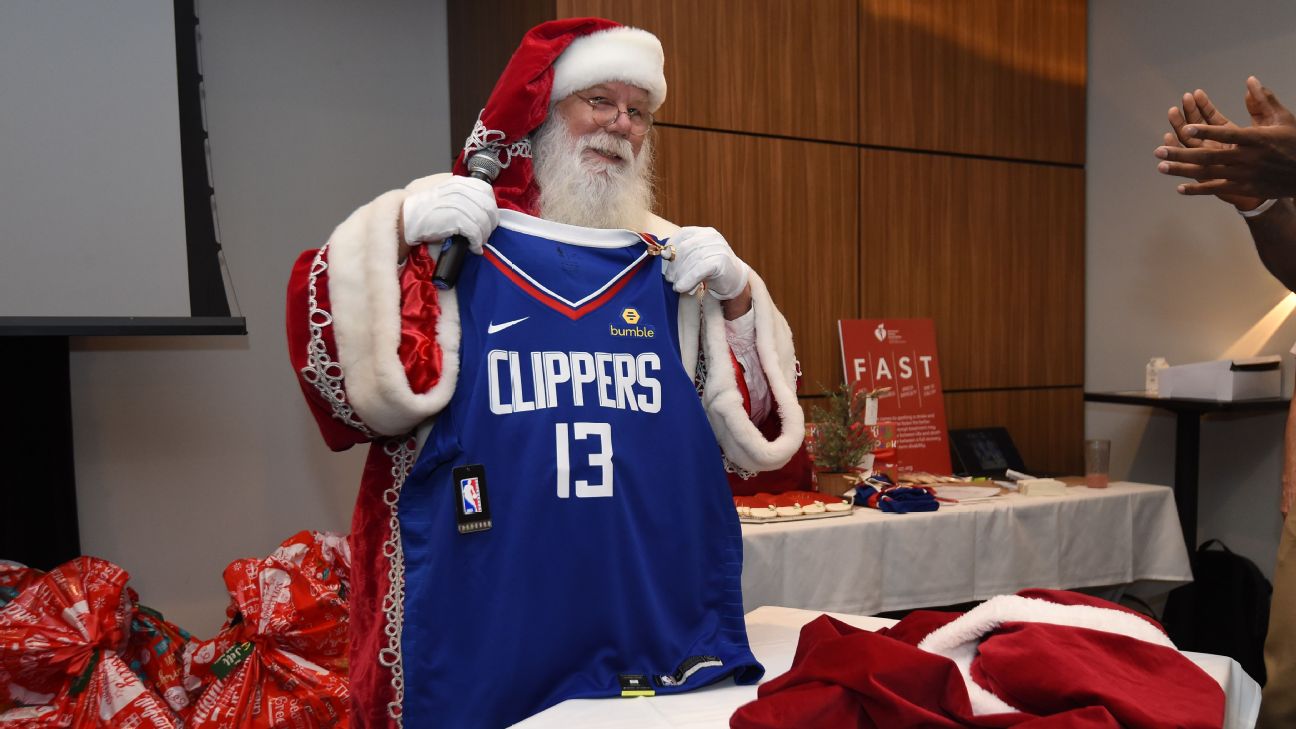 It's Christmas Day again in the NBA, and there's five entertaining matchups to fill your day. Beginning at noon ET, you can watch all of them on ABC, ESPN or the ESPN App. Get analysis and one big question on each game from ESPN's Kirk Goldsberry.

The Boston Celtics are in second place in the Eastern Conference, with a record of 20-7. The Toronto Raptors are tied for third in the East at 21-8.

The Raptors are the defending NBA champions, but they lost star forward Kawhi Leonard in free agency during the summer. The Celtics were eliminated in the Eastern Conference semifinals last season.

Boston's leading scorer is guard Kemba Walker, who is averaging 22.6 points per game. It is Walker's first season with the Celtics, after spending the first eight years of his career with theCharlotte Hornets. Toronto is led by power forward Pascal Siakam, who is averaging 25.1 points.

More on the Celtics vs. Raptors Christmas Day game:

Which NBA contenders can land the top trade targets?

The Milwaukee Buckshave the best record in the NBA at 27-4. The Philadelphia 76ers are tied for fifth in the East at 21-10.

The Bucks also had the best regular-season record in the entire league last year, at 60-22, but they were beaten by the Raptors in the Eastern Conference finals. The 76ers also were eliminated by the Raptors, in the conference semifinals.

Milwaukee forward Giannis Antetokounmpo is the second-leading scorer in the league at 31.0 points per game, and he is sixth in rebounds per game at 12.9. He also is the reigning league MVP. Philadelphia is led by center Joel Embiidat23.1 points per game.

More on the Bucks vs. 76ers Christmas Day game:

The evolution of 76ers rookie Matisse Thybulle has begun

The Houston Rockets are third in the Western Conference, with a record of 20-9. The Golden State Warriors--a season after falling to Toronto in what was their fifth consecutive NBA Finals appearance, having won the championship in three of their previous four campaigns -- are in last place in the West at 6-24.

These two teams met in the Western Conference semifinals last season, with Golden State taking the best-of-seven series 4-2. But the Warriors are missing their top four scorers from last season. Steph Curry and Klay Thompson are both out with long-term injuries, and Kevin Durant and DeMarcus Cousins signed with other teams during the offseason.

Houston guard James Harden is the leading scorer in the league at 38.8 points per game, and he is eighth in assists per game at 7.5. Golden State is led by guard D'Angelo Russellat21.9 points per game.

More on the Rockets vs. Warriors Christmas Day game:

James Harden is the greatest scorer of this NBA era

Another meeting in L.A. for Russ, Harden, Kawhi and PG

The Los Angeles franchises are first and fourth in the Western Conference standings. The Lakers are tops at 24-6, although they've lost three games in a row. The Clippers are 22-10.

The Lakers missed out on the playoffs a season ago, finishing 10th in the West at 37-45. The Clippers finished 48-34, nabbed the eighth and final playoff spot in the conference and lost to the Warriors in the first round.

Forward Anthony Davis, who was acquired via trade over the summer, is their leading scorer at 27.9 points per game, ranking him sixth in the league. Teammate LeBron James is not far behind at 25.8 points per game, and James also is leading the league in assists at 10.6 per game. The Clippers are led by Leonard -- formerly of the Raptors -- who is averaging 25.5 points. Paul George, who also joined the Clippers in the offseason, is right behind Leonard at 24.2 points.

More on the Clippers vs. Lakers Christmas Day game:

The two worlds of Staples Center

The New Orleans Pelicanshave the second-worst record in the Western Conference at 7-23. The Denver Nuggets are in second place in the West at 20-8.

The Pelicans finished in a similar position last season -- 13th out of 15 teams in the West, with a record of 33-49. The Nuggets, on the other hand, finished second in the West at 54-28, but they lost to the Portland Trail Blazers in the Western Conference semifinals, a series that went the full seven games.

The Pelicans won the NBA draft lottery this past spring, and they selected Duke big man Zion Williamson with the No. 1 overall pick. However, Williamson is yet to make his NBA debut due to injury.

More on the Pelicans vs. Nuggets Christmas Day game: