NBA playoffs 2021: Scrappy and tactical, Paul George and the LA Clippers find yet another Game 3 win 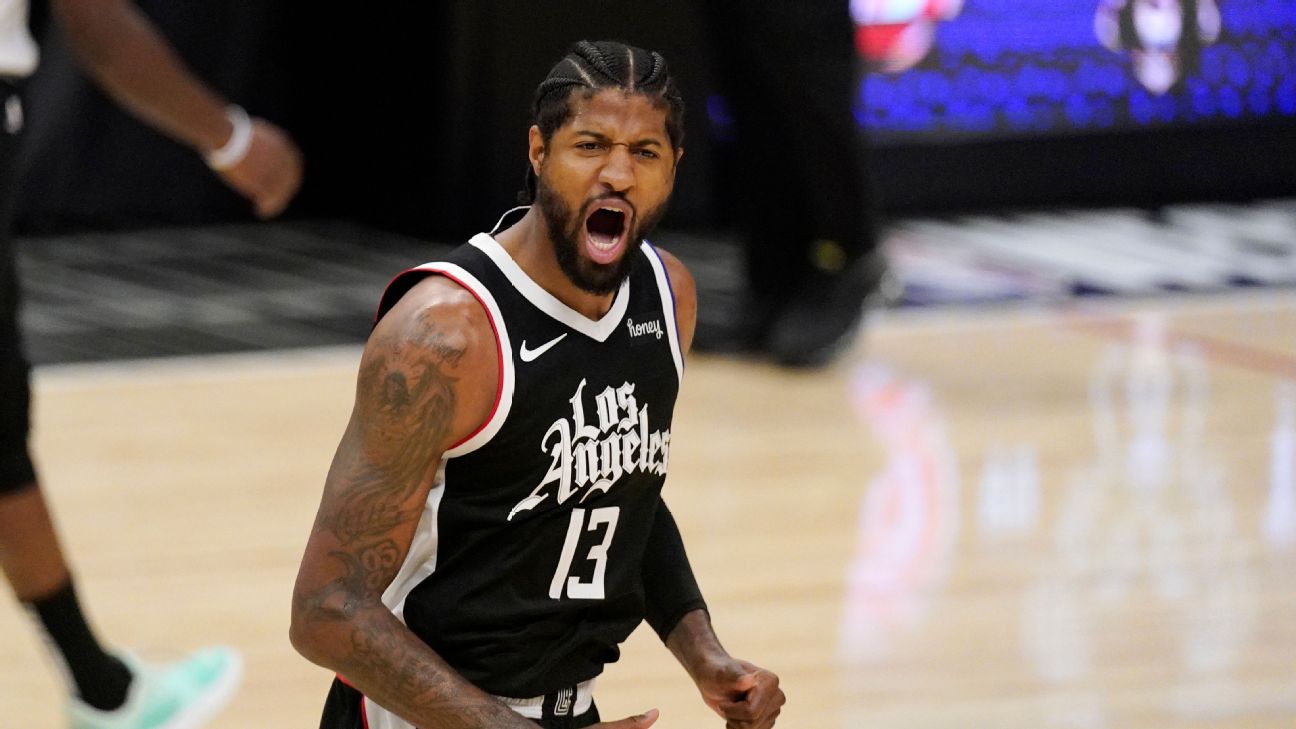 This year's edition of the LA Clippers has cobbled together comebacks off scrappy defense, tactical adjustments and unlikely heroes. But most of all, with Kawhi Leonard sidelined for the past five games of these NBA playoffs, they have leaned on Paul George. The former MVP candidate, one of the few active Clippers players with significant conference finals experience before this season, has battled back from a season of slander and social media roasts and has redefined the perception of "Playoff P."

It was a little less than a year ago when George clanked a shot off the side of the backboard in the Clippers' Game 7 loss to the Denver Nuggets in the Florida bubble, a shot that threatened to define his Clipper career and saddled him with the unflattering "Pandemic P" nickname.

Two nights ago, the noise once again hit a crescendo, after George missed two critical free throws that could've put Game 2 of the Western Conference finals on ice. Never mind that the possessions before he canned back-to-back go-ahead buckets. It was the missed freebies that were the enduring image of the game -- a 104-103 loss to thePhoenix Suns-- juxtaposed against Deandre Ayton's clutch game-winning alley-oop.

George said all the right things about moving on, but those types of failures can stick.

But, again, this season isn't last season. In the 2021 playoffs, when the Clippers have had their backs against the wall, they've answered the call, and it has been George leading the way. He's averaging 29.0 points on 45.7% shooting in more than 40 minutes of exhausting two-way basketball in the third game of a postseason series, all Clipper victories.

Thursday against the Suns, however, felt more desperate than the previous two Game 3s. Leonard was out again, while Chris Paul was back in the lineup for Phoenix, making his series debut against the Clippers in L.A., where he spent six seasons trying -- and failing -- to take the organization to this exact level.


George's performance wasn't pretty. He needed 26 shots to score his 27 points, and missed eight of the 11 3-pointers he attempted. But he added a team-high eight assists and 15 rebounds, one shy of the playoff career high he set last round. The Suns cut an 18-point deficit down to six in the fourth quarter, but George scored or assisted on the next 10 Clipper points, giving LA the final push it needed in a 106-92 victory.

For all the talk of letting go of the rope last postseason, the Clippers, and George, have rewritten the narrative. They now have five double-digit wins when trailing in the series, tying the 2005 Pistons for most in NBA history. George has now notched eight straight playoff games with at least 25 points, the longest single playoff streak in Clipper history.

In the Clippers' previous Game 4s, they won in dominating fashion, beating the Mavericks by 25 and the Jazz by 14. The relief of getting on the board was apparent in those series, setting a more relaxed and confident tone the rest of the way. As they turn to another Game 4, this time, there's a stark contrast: most likely no Kawhi. It will be on George & Co.'s shoulders to even up.


The Clippers have already made history this season as the first team to come back from multiple 2-0 deficits. But in each case, they tied the series after winning the all-important Game 3. They know coming back from both 2-0 and 3-1 down in the series is a far more difficult challenge.

They also have George, confident and comfortable in his place, the horrors of last summer well behind him. They can bank on Playoff P to deliver.

"I told myself, I'm going to do whatever it takes," George told ESPN's Rachel Nichols after the game. "I'm gonna give everything I have. I don't care how many minutes I have to play. That part doesn't concern me. It's win or go home in my opinion right now, and I'ma just leave it on the floor." 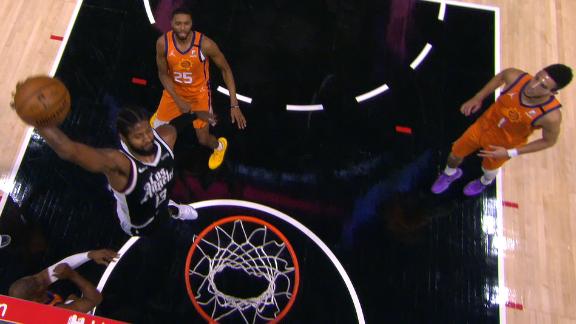 PG punishes the rim on dunk before the half ends
Paul George goes right down the lane and crams home the dunk to end the first half. 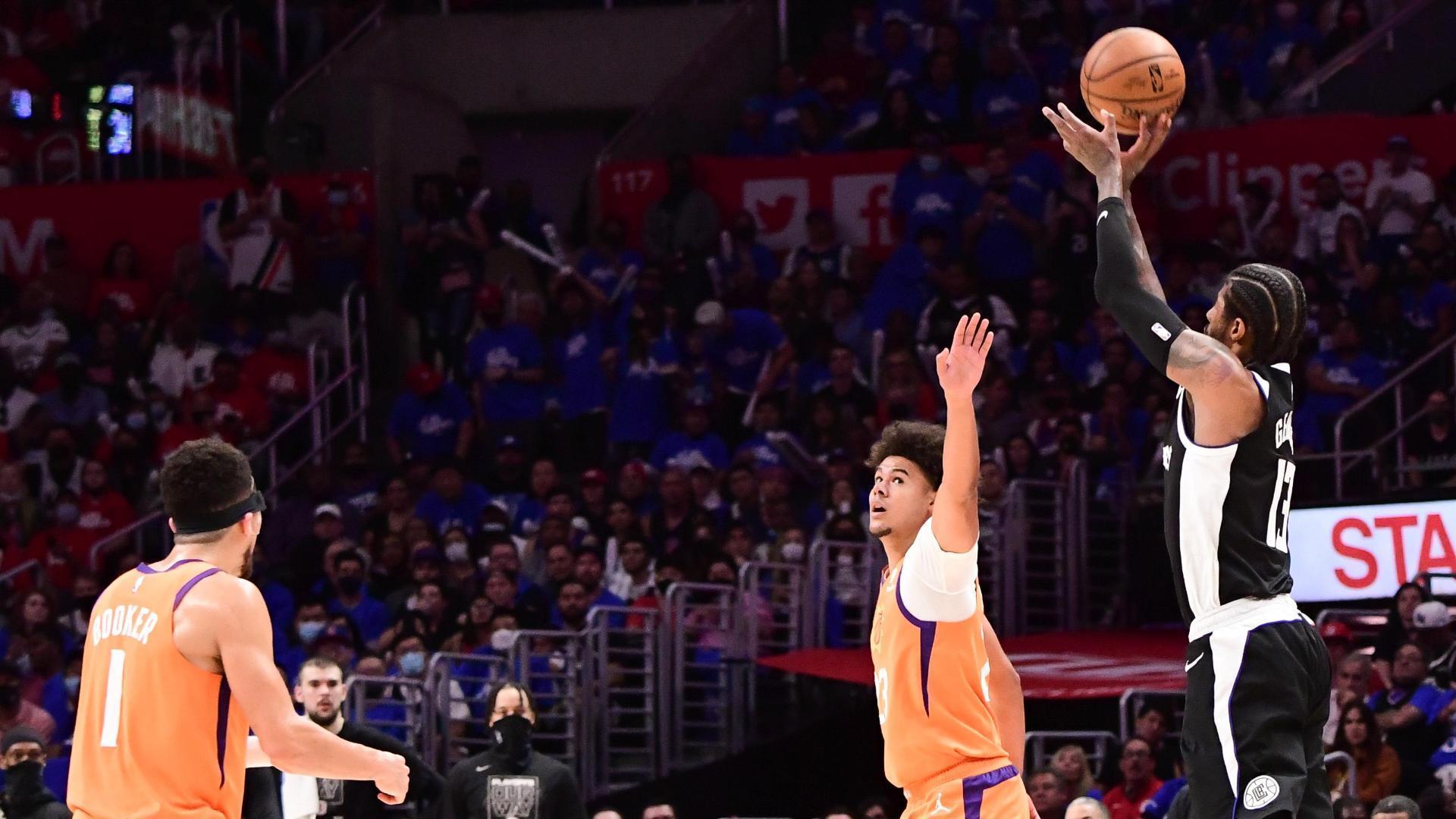 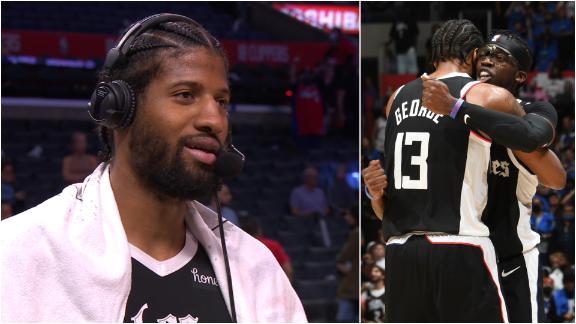