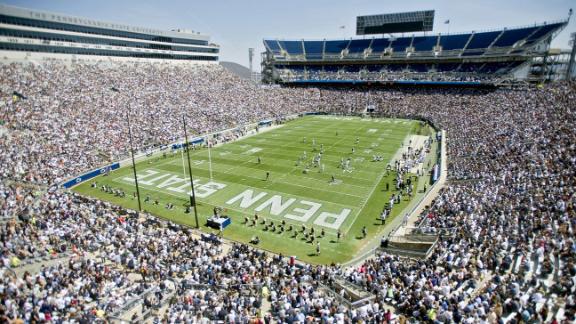 STATE COLLEGE, Pa. -- New internal NCAA emails offer a glimpse into how the organization questioned its own decision-making leading up to the unprecedented sanctions levied against Penn State in 2012, saying at one point it was banking on the fact that the university "is so embarrassed they will do anything."

Seven pages of emails -- from July 13 to July 21, 2012 -- were filed Sunday as part of a Pennsylvania state senator's lawsuit against the NCAA.

"Delicate issue, but how did PSU gain a competitive advantage by what happened?" Kevin Lennon, the NCAA vice president for academic and membership affairs, wrote July 14, 2012. "Even if discovered, reported, and actions taken immediately by the administration, not sure how this would have changed anything from a competitive advantage perspective."

Julie Roe Lach, then the NCAA's top enforcement officer, responded to Lennon about 75 minutes later. She told him that "Mark" -- believed to be Emmert -- thought Penn State did gain a competitive advantage, although she and several others disagreed with that point.

"I characterized our approach to PSU as a bluff when talking to Mark yesterday afternoon after the call," she wrote.

Roe Lach was ousted seven months later in the wake of a botched probe into the University of Miami athletic department.

"We find it deeply disturbing that NCAA officials in leadership positions would consider bluffing one of their member institutions, Penn State, to accept sanctions outside of their normal investigative and enforcement process," the university said in a statement released Wednesday.

"Debate and thorough consideration is central in any organization, and that clearly is reflected in the selectively released emails," the NCAA said in a statement Wednesday. "The national office staff routinely provides information and counsel to the membership on tough issues. The NCAA carefully examined its authority and responsibility to act in response to the athletics department's role detailed in the Freeh report. Ultimately, advised by all information gathered the Executive Committee determined to act and move forward with the Consent Decree."

The emails cover only a few days and reveal just some of the conversations NCAA officials shared leading up to the sanctions. But the glimpse still offers more insight into just what transpired prior to the NCAA's decision to hand down unprecedented punishment to Penn State in the wake of the Jerry Sandusky child sex abuse scandal and former FBI director Louis Freeh's ensuing investigation into it.

The university was fined $60 million, was given a four-year postseason ban, was forced to allow players to transfer elsewhere without penalty and had scholarships severely reduced, among other penalties. Some called it a fate "worse than the death penalty."

In September, however, most of those remaining sanctions were rolled back after the university's athletics integrity monitor, former Sen. George Mitchell, recommended the action in his second annual report. The sanctions were also lessened slightly in 2013.

The state senator involved in the lawsuit, Republican Jake Corman, initially filed a lawsuit so Penn State's $60 million fine would stay within the state. The recent filing was made as part of that lawsuit.