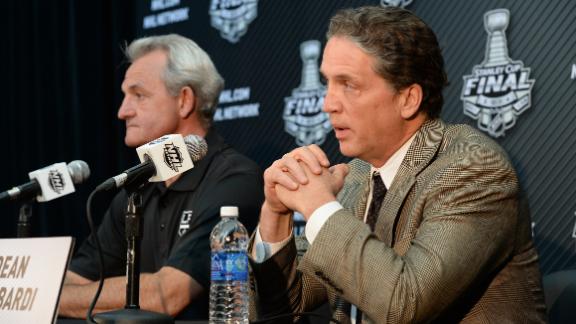 What do you make of the housecleaning by the Los Angeles Kings?

Craig Custance: I thought Dean Lombardi certainly earned the chance for at least one more season in Los Angeles. The guy won two Stanley Cups, after all. But this is an unforgiving business, and in winning those Cups, he raised the expectations to a level so high that it ended up costing him his job when they weren't met. The job ahead isn't going to be an easy one for new GM Rob Blake,mostly because of the contracts on the books. There are some legacy contracts that aren't looking good, most notably the Dustin Brown and Marian Gaborik deals. Blake has a small window in which to fix things because the last thing the Kings want is for the wheels to come completely off before Drew Doughty enters the last year of his contract, in 2018-19. The Doughty-to-the-Toronto Maple Leafs talk that is merely a whisper now is only going to get louder as that end date closes in.

Pierre LeBrun: When I spoke with Dean Lombardi two weeks ago, there was zero sense from him that he knew this was coming. He sounded energetic, had already spent most of March bouncing all kinds of ideas off assistant GM Blake as they tackled a season gone wrong and what needed to be done. Specifically, Lombardi talked to me about how it was clear his team needed to adapt to the faster NHL. His heavy and hard Kings won two Cups, but he knew they had to change. He won't get that chance. Was it a harsh decision by the Kings after Lombardi helped them win two Cups? Perhaps. But it has been three tough years for the Kings, who, since winning the Cup in 2014, have missed the playoffs in two years and were knocked out in the first round in the other. Knowing Lombardi, he would at least be happy that Blake got the GM job. For Blake, I'm sure he had mixed emotions -- he enjoyed working under Lombardi. Blake has the chance to be the next Steve Yzerman,a Hall of Famer turned hard-working GM, and is not a guy looking to cut corners. Lombardi prepared Blake well, after all. And no doubt Blake's focus will be to get this team to upgrade in the speed/skill department. That much you can count on.

Corey Pronman: Lombardi had made some brilliant moves and found some great draft picks over the past decade, building a long-term contender that won two championships, while also giving out some of the worst contracts in the NHL, not to mention being engaged in significant situations of questionable ethics withMike Richards and Slava Voynov. It's hard to think of another recent GM with such an erratic track record. Given the Kings' cap situation, new leadership might instill new ideas, but there is only so much Blake can do in the near term to make the Kings better, barring some incredible creativity or good fortune.

Scott Burnside: Blake and Luc Robitaille, the new brains of the Kings' operation, will be looking first and foremost for a coach who will be able to adjust the Kings' game plan to reflect the new speed game that is a must for success in the NHL. Jim Montgomery, coming off a collegiate championship at Denver University, is a hot name being bandied about. But what about Washington Capitals assistant Todd Reirden, who was in the hunt for the Calgary Flames job last summer and has coached elite players with the Pittsburgh Penguins and is now helping make the Caps one of the most difficult teams to play against, with the most dangerous power play in the league? Travis Green is another candidate. I have all kinds of time for John Stevens,the longtime assistant in L.A. and a former head coach with the Philadelphia Flyers. Robitaille and Blake are forward-thinking, outside-the-box guys, and while going the veteran route worked magic for Lombardi when he hired Darryl Sutter after firing Terry Murray in December 2011, this has to be a new-blood, new-vision hire if the Kings are going to get out of their three-year rut and not backslide into irrelevance in the crowded L.A. entertainment marketplace.

Joe McDonald: It's time to give Mike Stothers an opportunity to coach the Kings. Currently coaching the Kings' AHL affiliate, the Ontario Reign, Stothers has succeeded at every level he has coached. The Reign recently clinched a Calder Cup playoff berth. A season ago, Stothers led the Manchester Monarchs to their first Calder Cup before the team relocated to California. He was named the AHL's coach of the year last season with an impressive 50-17-9 record. He understands the future of the organization and has a solid grip on the prospects, and deserves a chance at the next level. The NHL is getting younger in the salary-cap era, and promoting Stothers makes sense for the Kings' next chapter.