NFL cancels Hall of Fame game, delays inductions until 2021 due to COVID-19 pandemic 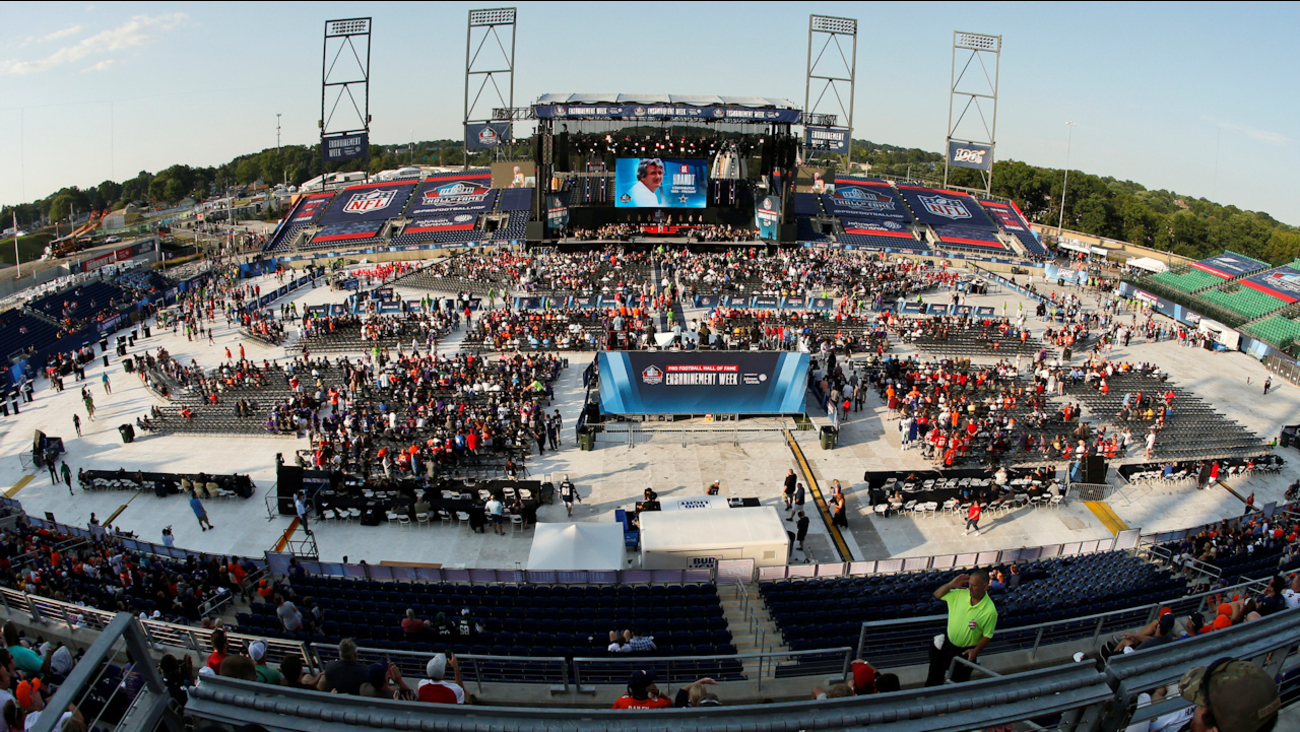 The Tom Benson Hall of Fame stadium is shown during the induction ceremony at the Pro Football Hall of Fame, Saturday, Aug. 3, 2019, in Canton, Ohio. (AP Photo/Ron Schwane)

The NFL on Thursday canceled the Hall of Fame game that traditionally opens the preseason and is delaying the 2020 induction ceremonies for a year because of the coronavirus pandemic.

The Aug. 6 exhibition game in Canton, Ohio, between the Dallas Cowboys and Pittsburgh Steelers is the first on-field event the league has canceled during the pandemic. It will be played on Aug. 5, 2021, with the same teams.


Enshrinements for 20 men scheduled for this year now will occur on Aug. 7, 2021, with the 2021 inductees going into the Pro Football Hall of Fame the next day.

"This is the right decision for several reasons, first and foremost the health and welfare of our Gold Jackets, incoming centennial class of 2020 members, hall personnel and event volunteers," said David Baker, the hall's CEO. "We also must consider the most appropriate way to fulfill the first tenet of our mission: To honor the heroes of the game. This decision meets that duty."

NFL owners are conducting a virtual meeting Thursday in which the preseason schedule will be discussed. It's possible the league will reduce the number of exhibition games to two per team from the usual four. Dallas and Pittsburgh would have played five, including the game in Canton.

The NFL was able to conduct free agency, the draft and several owners meetings remotely, and it recently began reopening team facilities that were shut in late March, albeit on a limited basis. Only players who are rehabilitating injuries are allowed in team complexes.

"The delay is obviously disappointing but completely understandable," Tagliabue told The Associated Press. "It's always a great weekend especially for football fans and family, coaches, colleagues who've been critical in our successes. But a big part of the weekend is meeting, greeting, photos and signing autographs for the thousands of fans. Not something that I'd want to do in the coronavirus environment."


Hutchinson said he was especially sympathetic to the older inductees about the delay.

"They're the ones who statistically, really, are at risk for being around crowds and all that stuff. So it makes sense," Hutchinson said. "The other thing, too, is it's a whole another year, and some of these guys are at the age where they're old anyway, and families and spouses and siblings and that, they're all older. A lot of these centennial guys have waited such a long time, and you just hope they're able to stand up there on that stage next August to do it status quo, right?"

Atwater, who was elected in his 16th year of eligibility, said he doesn't mind waiting another year for his induction because delaying the festivities "is the smart thing to do."

Atwater said he never was one to lament his long wait for football immortality and sees no reason to rue this latest delay.

"I'm in. I don't have to go through the anxiety ever again of waiting and wondering whether this is the year they let me into the Hall of Fame," Atwater said. "No, I'm good. This is easy."

The Hall of Fame, which opened in 1963, has never had two enshrinements in one weekend. It has had cancellations of the game, including in 2011 because of the league's lockout of the players, and in 2016, when the field at Tom Benson Hall of Fame Stadium was declared unplayable because of poor conditions.
Report a correction or typo
Related topics:
sportsohiopittsburgh steelersnflhall of famecoronavirusu.s. & worldsportsdallas cowboyscovid 19
Copyright © 2021 by The Associated Press. All Rights Reserved.
More Videos
From CNN Newsource affiliates
TOP STORIES