Nneka Ogwumike returns for Sparks, cites stress for back locking up 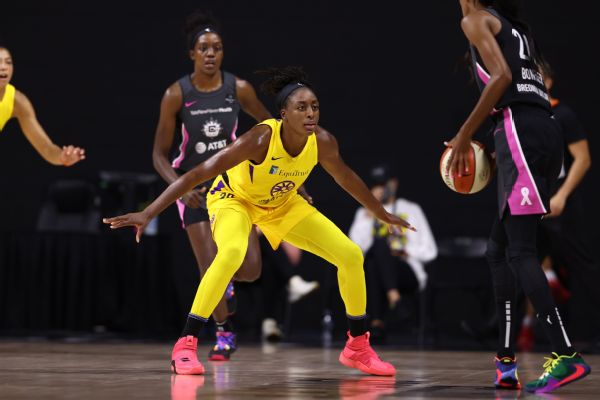 Los Angeles Sparks forward Nneka Ogwumike returned to the lineup Sunday after missing three games with a back injury. She had nine points and four rebounds as the Sparks defeated the Chicago Sky 86-80.

Ogwumike played just seven minutes in the Sparks' Aug. 30 victory over Atlanta, leaving that game with back issues. Los Angeles lost two of its next three games, although the Sparks nearly knocked off WNBA-leading Seattle on Friday. That game ended with Jewell Loyd's buzzer-beating 3-pointer with less than a second left, giving the Storm a 90-89 victory.


Ogwumike said after Sunday's game that she thinks stress had a lot to do with her back locking up on her in the game against the Dream. In the days leading up to that, Ogwumike had been very busy as president of the WNBA players' union executive committee in wake of the player protest after the shooting of Jacob Blake.

"I hold my stress in my back," Ogwumike said. "So it kind of manifested while I was playing in that game. I didn't get hit; I don't remember experiencing any type of trauma. I didn't realize I was stressed. It manifested in my back locking up, and I just had to wait for it to unlock itself."

It was a boost for the Sparks to have Ogwumike, the 2012 No. 1 draft pick and 2016 WNBA MVP who is averaging 12.1 points and 4.4 rebounds. She was not quite her normal self from the field, going 4-of-12, but coach Derek Fisher said her presence is still big for the Sparks.


"She made a lot of plays on both ends of the court," Fisher said. "It just helps us, and hopefully she's back for the stretch run."

The Sparks finish the WNBA regular season this week with the New York Liberty, the Washington Mystics and the Las Vegas Aces.

Seattle is at 16-3, Las Vegas is 14-4 and the Sparks are 14-5. The top two teams will earn a bye into the best-of-five semifinals.
Report a correction or typo
Related topics:
sportsespnnewswnbalos angeles sparksnneka ogwumikeespnw
Copyright © 2020 ESPN Internet Ventures. All rights reserved.
More Videos
From CNN Newsource affiliates
TOP STORIES