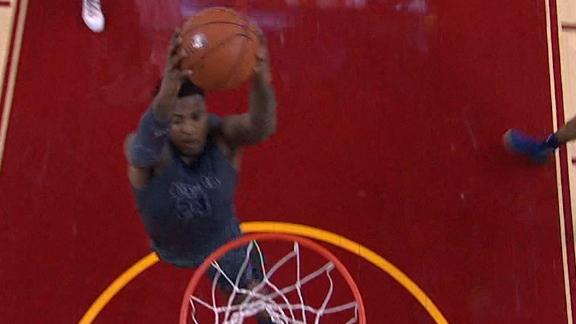 LOS ANGELES -- Struggling offensively, Nevada went into halftime trailing by one in front of a partisan crowd. The Wolf Pack's seniors emerged with a different mindset.

Caroline scored 22 points and No. 5 Nevada took control with a dominant second half to beat Southern California 73-61 on Saturday and equal its 8-0 start from last season.

Tre'Shawn Thurman added 14 points and nine rebounds and Caleb Martin had 12 points for the Wolf Pack, who outscored USC 39-26 over the final 20 minutes.

"It was a tough early game and really focusing on the importance of the game," Martin said.

It marked a major turnaround from the first half, when the Trojans shot 50 percent from the field and led by as many as seven points. The Wolf Pack missed more than half their field goal attempts and leading scorer Martin had just seven points, leaving them trailing by one at the break.

"Historically, we've been a really good second-half team, so far this year it's kind of mixed results," Nevada coach Eric Musselman said. "We just felt like we didn't have good enough rhythm to start the game and we felt like USC was controlling the pace. We had to play better defense."

Nick Rakocevic had 20 points and 12 rebounds for the Trojans (5-3) as their three-game winning streak ended. Bennie Boatwright, their leading scorer at 16.8 points, was held to seven points.

USC came out aggressively to start the game, driving to the basket, crashing the boards and closely defending Martin, who entered the game averaging 21 points.

Caroline and Thurman carried Nevada in the first half, each scoring 11 points.

USC didn't appear to be the same team in the second half, when the Trojans never put together a scoring run.

"I thought the first half was a really good sign that we could be one of the top teams and compete, but we've got to come out better in the second half," Rakocevic said. "We just came out flat. Defensively, I think we just had too many breakdowns."

The Wolf Pack turned things around quickly, outscoring USC 9-0 to open the second half. It was the start of a 31-11 run that produced Nevada's largest lead, 65-46. The spurt included three consecutive 3-pointers by Jazz Johnson (two) and Thurman.

"A team that averages 90 points, you're not going to be able to hold them down the whole game, but when they go on runs you have to score with them," USC coach Andy Enfield said.

Nevada: The Wolf Pack's point total was a season low. ... Los Angeles Lakers player JaVale McGee, who played two years at Nevada before leaving for the NBA, sat courtside wearing a Nevada hoodie. His Hall of Fame mother, Pam McGee, who starred in basketball at USC, wore a Trojans jersey. ... More than 20 pro scouts were in attendance. ... The teams played each other for the first time since 1976. The Wolf Pack trail the series 2-1.

USC: The Trojans' point total was a season low. ... G Charles O'Bannon Jr. is expected to have the cast on his left pinky finger removed on Monday. He had surgery on Nov. 13. ... G Kevin Porter Jr., the Trojans' third-leading scorer, returned to play in the second half after missing two games with a right quadriceps contusion. He was scoreless in four minutes. ... Enfield needs one win for his 100th at USC. He is 99-79 in his sixth season. ... Before the game, Boatwright received the ball used to score his 1,000th career point against Texas Tech, on Nov. 19 in Kansas City.

Musselman used to visit Galen Center when he was an assistant at Arizona State. The crowd of 5,844 was small but loud in urging on the Trojans. "This place is not like it was today," he said. "It was electric."

Nevada: Returns to Los Angeles on Friday to play Arizona State in the Basketball Hall of Fame Classic at Staples Center.

USC: Plays TCU on Friday as part of the tripleheader at Staples.