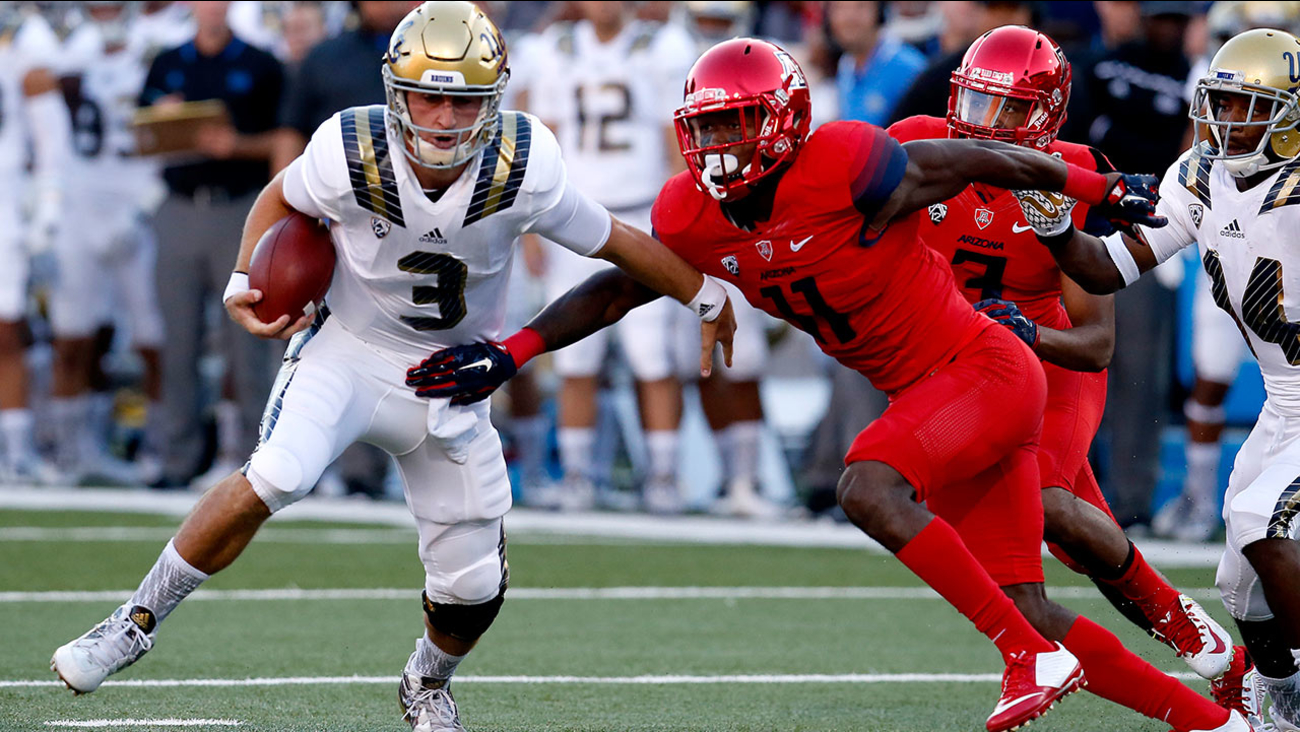 UCLA quarterback Josh Rosen (3) gets away from Arizona safety Will Parks during the first half of an NCAA college football game, Saturday, Sept. 26, 2015, in Tucson, Ariz. (AP Photo/Rick Scuteri)

AP
TUCSON, Ariz. -- True freshman Josh Rosen was sharp in his first Pac-12 road game, throwing for 284 yards and accounting for three touchdowns in No. 9 UCLA's 56-30 victory over No. 16 Arizona on Saturday night.

UCLA turned this Pac-12 showdown into a laugher by halftime, turning three Arizona turnovers into touchdowns while building a 28-point lead.

Rosen had two touchdowns on 19-of-28 passing and ran for another score after struggling the previous two games. Paul Perkins ran for 85 yards and three more scores and the Bruins had 497 total yards.

Arizona (3-1, 0-1) struggled at home after rolling through a soft nonconference schedule.

The Wildcats had trouble stopping Rosen and the Bruins even with All-America linebacker Scooby Wright back, plagued by a slew of missed tackles.

Arizona's Nick Wilson ran for 136 yards and Jerrard Randall added 128 after replacing Anu Solomon at quarterback in the second quarter.

UCLA has won all three games against Arizona under Jim Mora and had done it, in large part, by bogging down the Wildcats' up-tempo offense. A year ago, the Bruins held Arizona to one of its worst offensive performances under Rich Rodriguez in a 17-7 victory over the Wildcats.

Arizona got off to a great start against UCLA's depleted defense, quick-hitting its way to a 34-yard touchdown pass from Solomon to Nate Phillips.

The Wildcats couldn't get out of their own way after that.

Arizona's second series ended quickly when a snap sailed over Solomon's hand and the Bruins recovered. Perkins scored on a 16-yard run the next play.

The Wildcats lost another fumble when Wilson accidently bumped Solomon with his elbow as he was preparing to throw. UCLA recovered that one, too, and Rosen found Jordan Payton for a 5-yard touchdown pass that put UCLA up 28-7 early in the second quarter.

The Wildcats showed a glimpse of life midway through the second quarter after Solomon went out with an apparent head injury and Randall burst off a 39-yard touchdown run. Randall followed that by throwing an interception and Perkins scored on a 1-yard run on the ensuing drive to put UCLA up 41-14.

UCLA complemented its opportunistic defense with an efficient offense that ran right through the Wildcats and Wright, who was back after missing two games with a knee injury.

Rosen showed his poise last week against BYU, overcoming three first-half interceptions to lead UCLA to a 24-23 win. He was crisp against the Wildcats, picking them apart for 212 yards and two touchdowns on 13-of-17 passing by halftime.

Arizona gained a little momentum to open the second half after Randall scrambled and found David Richards for a 16-yard touchdown. The Wildcats reached UCLA's 3 on the next drive, but went backward and settled for Casey Skowron's 44-field goal.

The Bruins gained it right back, moving quickly to set up Rosen's 8-yard touchdown run that made it 49-23.
Related topics:
sportsarizonauclancaaucla bruinscollege football
Copyright © 2020 by The Associated Press. All Rights Reserved.
More Videos
From CNN Newsource affiliates
TOP STORIES