No timetable for LeBron decision 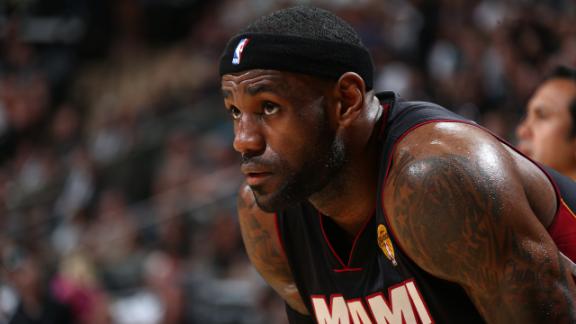 LeBron James was in attendance again Thursday at his basketball camp in Las Vegas, but had yet to announce a decision about where he will play next season.

James was joined at the LeBron James Skills Academy by his Heat teammate of four years, Dwyane Wade, who also is a free agent. The two were spotted chatting and watching a pickup game together.

There is no timetable for James' decision, but with him reportedly planning to attend the World Cup final Sunday in Brazil, a decision before then seems likely.

James and Paul are done meeting with teams, according to sources close to the situation. James now will talk with his family and make his choice.

If James does choose to leave the Heat, free agent Chris Bosh will sign with the Houston Rockets, sources said. James not rushing to make a choice could put a time squeeze on Bosh. Though he hopes to remain with the Heat along with James, sources said, Bosh has secured a backup offer for four years and $88 million from the Rockets.

The Rockets' position, however, got more complicated on Wednesday when restricted free agent Chandler Parsons signed a three-year offer from the Mavericks for more than $45 million, which Houston has three days to match.

If the Rockets match, they will lose the requisite cap space needed to sign Bosh. They can match the offer and still afford Bosh, but only if they sign Bosh first. To make room for Bosh, the Rockets will need to execute at least two trades, likely involving Omer Asik and Jeremy Lin, to clear cap space.

Houston has already struck a trade with New Orleans to dispatch Asik to the Pelicans. And ESPN.com reported earlier this week that the Philadelphia 76ers are prepared to trade for Lin and the $15 million he's owed next season as long as the Rockets attach suitably attractive assets -- such as a future first-round draft pick or more.

The Heat were represented at Wednesday's meeting with James by president Pat Riley and general manager Andy Elisburg. James was joined by Paul. This was the first known face-to-face meeting James has held since officially becoming a free agent on July 1. James' agent met or spoke with officials from the Mavericks, Rockets, Suns, Cavaliers and Lakers last week, but James was not present.

The Heat planned to talk to James about their latest free-agent commitments, forwards Josh McRoberts and Danny Granger, in addition to going over roster possibilities with him. Currently, the Heat have only four players expected to be under guaranteed contract for next season on their roster.

Information from ESPN.com's Ramona Shelburne and Marc Stein was used in this report.