No wrist fracture for Dustin Pedroia 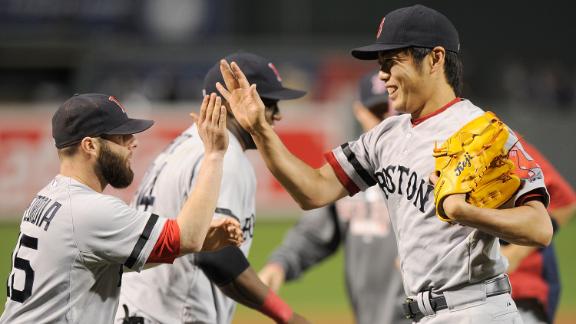 CHICAGO -- Red Sox second baseman Dustin Pedroia and closer Koji Uehara will be rejoining the team Tuesday in Chicago, the team announced Monday night, after both players underwent exams in Boston by the team's medical staff on Monday.

Pedroia, who sat out Sunday night's game with what was described as soreness in his left wrist, underwent an MRI and was diagnosed with inflammation in the wrist and is listed as day to day, according to the team's statement. Tests revealed no fracture of the wrist, which Pedroia termed "great news" earlier in the day, but no explanation was offered for the cause of the inflammation.

Pedroia is famously averse to disclosing the nature of injuries. He tore the ulnar collateral ligament in his left thumb in the first game of the 2013 season but played in all but two games that season, with news of the injury not surfacing until late May.

Uehara, who reported stiffness in the back of his throwing shoulder on Friday and did not pitch in the Yankees series this past weekend, also underwent an MRI, which showed no structural damage, according to the team. Uehara also is listed as day to day; he long-tossed Sunday and reported no ill effects, but manager John Farrell said Sunday night that the club would like Uehara to have at least one bullpen session before using him in a game.

Outfielder Shane Victorino, who has been on the disabled list with a strained right hamstring, was cleared to begin a rehab assignment after being examined in Boston. Farrell had indicated that assignment was likely to begin Tuesday in Double-A Portland. The team statement said only that his assignment would begin "later in the week" and did not state where it would take place.