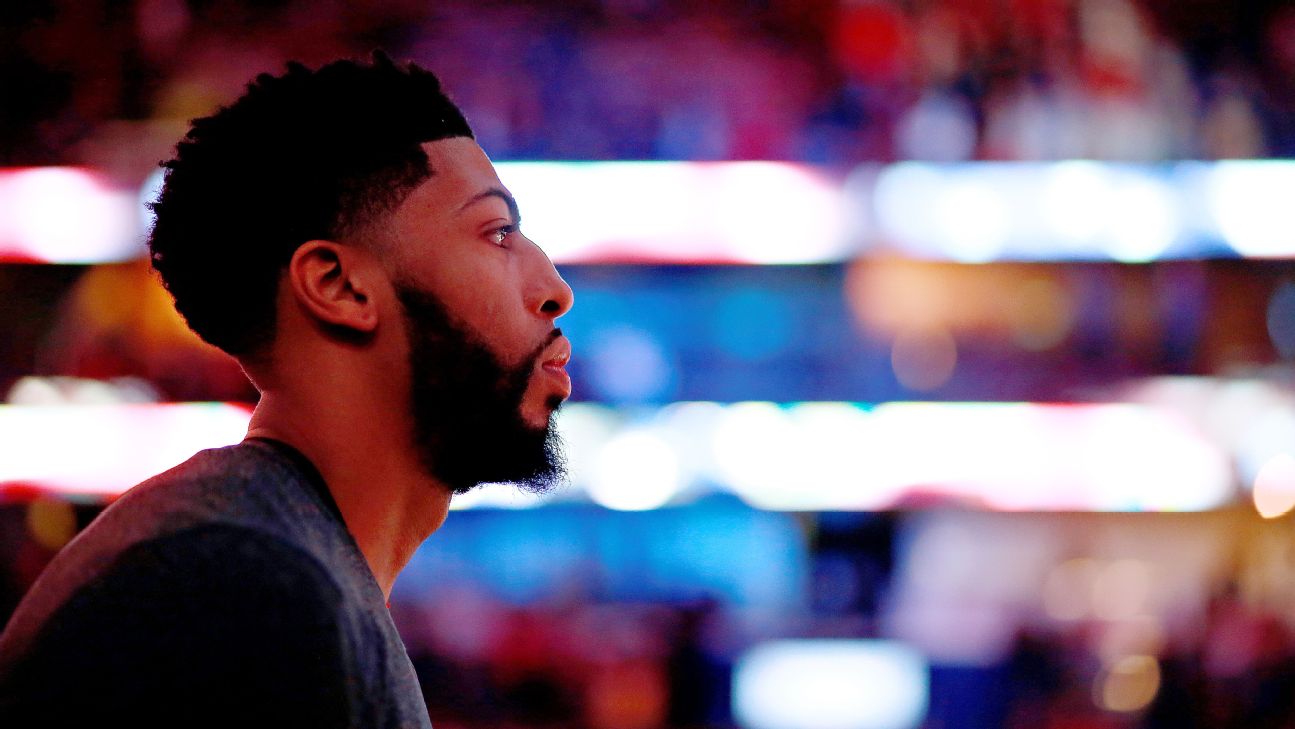 On Wednesday night, Anthony Davis will make his highly anticipated return to his former home of New Orleans. Given the way in which he left -- by announcing he would not re-sign with the Pelicans and demanding a trade-- the odds of him receiving a warm welcome are, well, low.

In fact, there's probably a greater chance of Golden State reclaiming the NBA title this season than there is of Davis being greeted with anything less than a resounding chorus of boos. Sorry to drag you into this, Warriors fans: It's not your fault.

While there's likely littleThe Brow can do to quell the hostile environment (aside from putting up ridiculous numbers to quiet the crowd), he can take solace in knowing that he is far from the first athlete to go from beloved to disdained by an organization's entire fan base.

Seriously, if we included every contentious homecoming in sports, this article would start to drag on longer than that awkward conversation with the relative who corners you at Thanksgiving when all you wanted was for them to pass the mashed potatoes. So instead we'll just regale you with some of the most memorable ones from over the years. ... This one's for you, AD.

LeBron James went from hailed as a hero to jeered as a villain quicker than the writers of "Game of Thrones."

The environment was nothing short of combative as LeBron James returned to Cleveland for the first time as a member of the Miami Heat. The feelings of betrayal, disappointment and vitriol directed at him were tangible in the arena -- and in the city as a whole.

LeBron wasn't just the most popular sports figure in town, he was one of their own. So his departure for South Beach brought about a different level of anguish to the championship-starved city whose hopes and dreams rested upon his shoulders.

The "kid from Akron" was showered in boos and obscenities from former fans. Some of them threw things (including beverages and a battery) while others held signs reading things such as: "Quitness," "Witnessed No Championship," along with the more straightforward "I Hate LeBron." According to the team, four fans were ejected and one was arrested that night.

King James powered through the animosity to score 38 points en route to a118-90 Heat win.

From favored son to public enemy No. 1. Bryce Harper, who left the Nationals to sign a record-breaking 13-year,$330 million deal with National League East rival Philadelphia over the offseason, didn't garner an exceptionally warm welcome when he returned to Nationals Park for the first time.

Fans showered him with boos during a pregame tribute video, then cheered loudly as ace Max Scherzer struck him out in his first at-bat. The heckling didn't sit well with Harper as he called fans out after the game saying they "crossed the line."

Some will argue this reception was petty as Harper simply went to the highest bidder; others will say loyalty should count for something.

We'll just say this: The Nationals went on to win the World Series the season after he left.

Golden State Warriors vs. Oklahoma City Thunder: A game to live in NBA infamy. No departure had caused such a ruckus around the Association since King James was hounded for "The Decision."

You didn't have to spend much time in OKC to see just how much Kevin Durant meant to the city -- the guy even had a restaurant named after him (the establishment closed in the wake of his departure but has since reopened with a different name and theme).

Subsequently, the welcome KD received was far from friendly. There were deafening boos while he warmed up, when he was introduced and whenever he touched the ball on offense. There were also cupcake signs -- so many cupcake signs. Not to mention at least one fan dressed as an actual cupcake.

To make matters worse, there was the messy divorce from his former teammate and friend, Russell Westbrook, which added a whole other layer of animosity. Things got chippy between the ex-duo throughout the game and they exchanged words on several occasions. At one point during the game Westbrook could be seen yelling: "I'm coming!"

Durant got the last laugh, though, dropping 34 points and grabbing nine rebounds as the Warriors secured a dominant 130-114 victory. After the game he commented on the persistent boos, saying: "I actually thought it would be a little louder, but it was fun."

Deion Sanders, who played for the Atlanta Falcons for five years, left the city in an outrage after signing with the San Francisco 49ers. There was more ill will in the wake of his departure, as Falcons players claimed he demanded preferential treatment. They also said "Prime Time" really meant "Part Time" because Sanders split time between the Atlanta Braves and the Falcons.

This heated homecoming tale was a bit dissimilar to the others: Rather than enduring the relentless ridicule during his return to the Georgia Dome, Sanders taunted the Falcons faithful.

That's right, Prime Time flipped the script. He put on a show. It wasn't enough to high-step the final 40 yards into the end zone on a 93-yard interception return, he decided to turn sideways and flash a big ole grin toward the Atlanta bench for good measure.

The more they booed, the more he thrived (and danced).

All's fair in love and baseball -- except for leaving the Boston Red Sox for the New York Yankees. You really just can't do it. I mean, you can, but you're going to get publiclyreprimanded for it.

One of the most heated rivalries in sports is not something to be trifled with, just ask Johnny Damon. The former Boston star was granted some leniency because of his involvement in bringing the Sox a World Series title, but the fans were still pretty brutal in his return to Fenway Park.

Many of them opted to throw fake and real dollar bills on the warning track in center when he took the field as an ode to his departure -- he left to sign a four-year contract with New York that was worth $12 million more than what Boston offered.

Damon drew extra criticism for joining the Yankees in December 2005 after vowing earlier in the year that "there's no way I can go play for the Yankees, but I know they're going to come after me hard. It's definitely not the most important thing to go out there for the top dollar, which the Yankees are going to offer me. It's not what I need."

Jaromir Jagr won two Stanley Cups as a member of the Pittsburgh Penguins, but he didn't see a viable future as a Penguin, which left a bitter taste in the mouths of many Pens fans. More than that, it was the way in which he departed from the franchise (asking to be traded twice) that prompted the barrage of boos whenever he touched the puck while visiting Mellon Arena.

During the 2000-01 season, Jagr was going through a bit of a slump. That, combined with his rocky relationship with then head coach Ivan Hlinka, the return of Mario Lemieux from retirement, and the Penguins' inability to pay Jagr the big bucks, would probably have been enough cause for both parties to move on. But before being traded to the Washington Capitals in 2001, he famously declared,"I feel like I'm dying alive.... I don't feel comfortable here right now. It's not the same for me right now. We'll see what happens. Maybe I'm going to think about retirement pretty soon."

While his threat to retire at the age of 28 was idle, it didn't bode well for his relationship with the Penguins organization or its fan base.

Is it always about money in baseball? That was a rhetorical question.

Similar to the stories of Bryce Harper and Johnny Damon, Alex Rodriguez's departure from Seattle had to do with a pay day. Rodriguez, widely considered to be the best player in the game at the time, jilted the Mariners in favor of a 10-year, $252 million contract with the Texas Rangers during the offseason. At the time, it was the most lucrative contract in sports history.

The fans did not hesitate to voice their displeasure as Rodriguez came up for his first at-bat as a Ranger. The boos at Safeco Field were deafening -- and persistent.

The game ended in a 9-7 Mariners victory.

Vince Carter's relationship with Toronto has been a complicated one over the years. On Dec. 17, 2004, the former Raptors phenom was traded to the New Jersey Nets amid reports that he was displeased with Toronto's upper management. Rumors also circulated that he had stopped giving his all on the court.

It's no surprise that the thought of Vinsanity quitting on the team did not go over well with the Raptors' faithful. The underwhelming return from the trade of Alonzo Mourning (who refused to report and was released immediately), Aaron Williams, Eric Williams and two first-round draft picks only added insult to injury.

When Carter made his first trip back to Toronto donning a New Jersey uniform on April 15, 2005, the sold-out crowd let him hear it with a steady stream of boos and "V.C. sucks" chants.

Carter remained unfazed and went on to score 39 points as the Nets left town with a 101-90 victory. He would make a habit of putting on impressive performances in The Six for years to come.

Eric Lindros played eight seasons with the Flyers before things unraveled. On May 26, 2000, Game 7 of the Eastern Conference finals, an open-ice hit left him with the sixth concussion of his career. Lindros was cleared to resume playing on Nov. 27, 2000, but he sat out the remainder of the season and vowed never to play for the Flyers again.

Lindros was then traded to the New York Rangers. Despite insisting that his qualms in Philadelphia had solely been with the owner and general manager, Flyers fans didn't take kindly to his actions and made sure he was well aware when he returned to their home ice.

Terrell Owens was embraced during his time with the Eagles, though as soon as he signed with the Cowboys, the love quickly turned to loathing. Fans united in common hatred for their former star, who had joined an NFC East rival.

Owens, who notoriously feuded with Philadelphia quarterback Donovan McNabb and criticized the team before being released by the Eagles and picked up by Dallas, received an ice-cold homecoming to Lincoln Financial Field. Though McNabb maintained that he was immune to the T.O. hoopla surrounding the highly anticipated matchup, the city of Philadelphia was assuredly not.

The fans had emotionally invested in T.O, and thus they turned on him even harder. Owens joked in the week leading up to the game that the crowd was capable ofthrowing "cheesesteaks, batteries, Huggies, anything" at him.