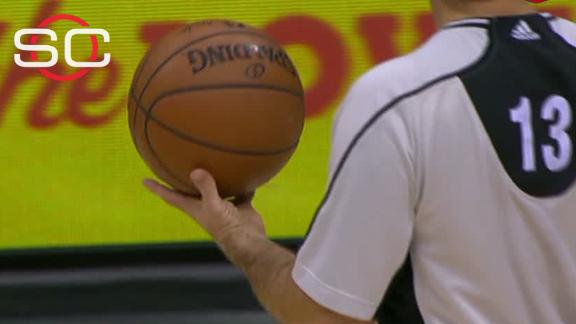 Officials in Saturday night's Houston-Atlantacontest removed a game ball because of a sticky substance that Rockets center Dwight Howardhad applied.

Howard applied a Stickum spray to his hands from a can covered in white tape while waiting to re-enter the game late in the first quarter.

After Hawks forward Paul Millsap made the first of two free throws, Howard checked back in and grabbed the ball from the official. When Millsap got the ball back, he immediately questioned what was on it.

"I've never felt the ball like that, ever," Millsap said, according to the Atlanta Journal-Constitution. "It was sticky. It was like super glue or something was on there. I couldn't get it off my hands. It was the weirdest thing ever."

Official Monty McCutchen investigated before going to each bench and issuing a warning. According to theJournal-Constitution,McCutchen told each team: "Stickum is illegal in the NBA."

The league said the incident will be reviewed.

The newspaper reported that Rockets coach J.B. Bickerstaff slid in front of the can, which was still at the scorer's table, in an attempt to hide it before McCutchen approached Houston's bench.

A member of the Rockets' staff ultimately removed the can from the scorer's table.

Howard was not penalized. He said after the game, a 109-97 loss in which he shot just 2-of-7 from the field, that he has openly sprayed the sticky substance on his hands for the past five years.

"I don't know why people are making a big deal out of it," he said, according to the Houston Chronicle. "I do it every game. It's not a big deal. I ain't tripping."

Information from ESPN's Calvin Watkins was used in this report.