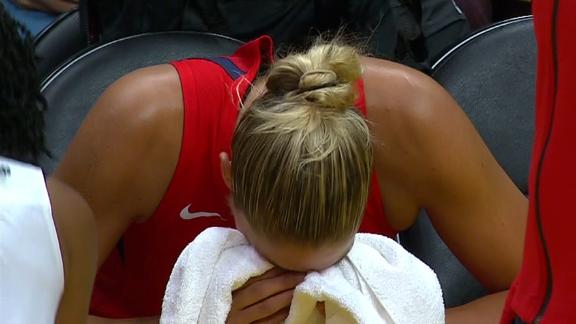 LOS ANGELES -- Nneka Ogwumike had a season-high 31 points and grabbed 10 rebounds, Chelsea Gray had her first career triple-double, and the Los Angeles Sparks beat the Washington Mystics 98-81 on Sunday.

Ogwumike shot 11 of 15 from the field and hit a career-high five 3-pointers and Gray finished with 13 points, a career-best 10 rebounds and 13 assists. It was just the eighth regular-season triple-double in WNBA history, and ninth overall.

Elena Delle Donne, Washington's leading scorer (17.2 points per game) this season, left the game in the first minute with a facial injury and did not return.

Ogwumike hit a 3-pointer to make it 10-7 midway through the first quarter and the Sparks led the rest of the way. She finished the quarter with four 3-pointers -- matching her previous career high -- and 14 points, and Williams scored 10, as L.A. took a 29-21 lead into the second.

The Sparks led 51-46 lead at the break, scoring their most points in a half this season, and finished with a season-high 15 3s on 30 attempts.

Aerial Powers led the Mystics (9-4) with a career-high 24 points and Kristi Tolliver had 18 points and nine rebounds. The Mystics had their five-game win streak snapped.