Olney's biggest deadline questions: Which reliever will the Dodgers get? 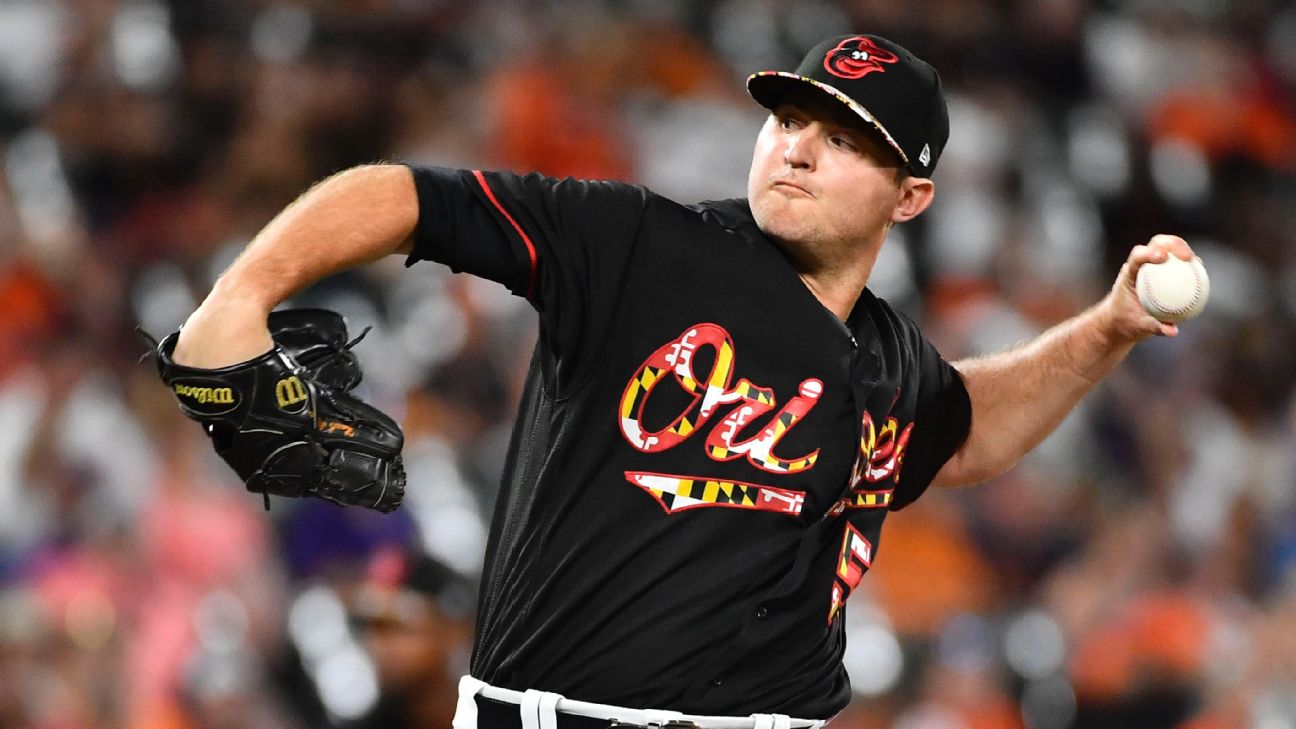 Major League Baseball teams have just seven days left to make trades without passing players through waivers, but with more sellers than buyers in certain areas and injuries a lingering concern for all contenders, some evaluators are starting to believe there could be more deals after the July 31 trade deadline than before.

But for the last 168 hours leading up to the deadline, here are the biggest questions:

1. Will the Houston Astros land a front-line closer (i.e.Zach Britton)?

The Astros thought they had a deal for Britton last season, but as the Orioles made a final assessment of their return in the proposed transaction, they decided they weren't getting the big-time, high-end prospect they coveted. So they backed away and 2 months later, the Astros' A.J. Hinch was left to improvise at the end of games in the postseason, using everybody fromLance McCullers Jr.to Brad Peacock to Charlie Morton in big spots. What was missed in the media review were all those smaller moments that made the equation work -- a batter successfully retired by Francisco Liriano, or Joe Musgrove throwing a scoreless inning. To expect that sort of fragile success again would be inadvisable.

This is why the Astros are among the teams pursuing Britton again this year, in the aftermath of Ken Giles' decline and demotion to the minors. And while Britton has risk attached, given his medical history of the past couple of years, Hinch could really use a late-inning safety net, and Britton is the best available.

2. Will the Yankees find a starting pitcher upgrade?

As the Yankees drift further and further behind the Red Sox, this quest is built on one very specific need: Is the pitcher the Yankees land capable of beating Houston or Boston in the postseason? As of Tuesday morning, the Yankees are six games behind the Red Sox in the AL East -- four behind in the loss column, eight in the win column -- and according to FanGraphs, Boston's chances for winning the division have climbed to 71.4 percent. Which means it is increasingly likely the Yankees will start Luis Severino in the AL wild-card game against the Mariners or Athletics, and if they survive that, they move on to the next round -- when a newly acquired starting pitcher might get his first chance for the Yankees in the postseason.

The Yankees like J.A. Happ but haven't been able to agree with Toronto on a price, and with the regular-season standings seemingly mattering less by the day, the Yankees might prefer to keep their assets and try touted right-hander Justus Sheffield in the rotation at some point.

3. Will the Cubs land Britton?

They, too, are engaged with the Orioles about Britton -- heck, all the contending teams are -- and with Brandon Morrow on the disabled list, their pursuit has particular relevance. If the Cubs land Britton, reach the postseason again and Morrow is back, Britton could be deployed as the best and most reliable lefty, something the Cubs need because of the shift of Mike Montgomery to the rotation, the inconsistency of Justin Wilson (29 walks in 39 innings), and the struggles of Brian Duensing (he's got 24 walks in 31 innings and a 6.68 ERA).

If not Britton, the Cubs either need to find a way to get Montgomery back in the bullpen or add another lefty.

4. Which reliever will land with the Dodgers?

They need somebody who can absorb responsibility in front of Kenley Jansen, and yes, they want Britton (and according to one source, tried to dangle Yasiel Puig in front of the Orioles, perhaps to help to make the financial part of the proposed transaction work). They'll take their shot at Britton and if they can't get him, they will find somebody. Right now, their bullpen is probably their greatest concern, other than the inherent injury questions about the 30-something Clayton Kershaw and Rich Hill.

5. What do the Red Sox believe about what Dustin Pedroia might contribute late this season?

That question will shape their decisions in the days and weeks ahead. Pedroia has spoken positively about the chances that he'll come back this year, return to the lineup and return to form. But Boston's front office must use its access to Pedroia's medical information to make a clear-eyed and hard decision about whether to acquire someone who can play second base -- someone like the Twins' Brian Dozier, for example. The Red Sox have the best record in baseball andEduardo Nunezis a respected veteran. But his defense at second is a problem, as reflected in some metrics -- he is second worst in baseball in defensive runs saved. Dozier isn't thriving in these numbers either, but he has much more experience at the position and has always been a better second-half player, with power.

The Red Sox will add a reliever, one way or another, and that has been a focus in their recent pursuits. But they will need to decide how much they should count on Pedroia.

6. How deeply will the Phillies and Braves invest in upgrades?

Both teams have arrived to contention a year sooner than anticipated, ushered into the 2018 race by the slogging Washington Nationals. As the days go by, it becomes more and more uncertain whether the Nationals will start to gain some traction -- and that should embolden Philadelphia and Atlanta. As has been well-documented, the Phillies have enormous financial flexibility because of their incredibly modest payroll obligations, and so they could be really active in adding help through next month, in adding waiver claims. "You'll start to see some teams stop asking for prospects and start looking to dump money," one GM predicted last week. Think about the Mets' swap of Jay Bruce to the Indians last season as an example of that: In order to just move the remaining dollars on Bruce's deal, the Mets basically handed him to the Indians for nothing.

Patience in this trade market could pay off as much as it did in last winter's free-agent market -- if you've got some money to spend, you probably will have a lot of choices. And with the luxury-tax restrictions serving as a factor for the Dodgers and Yankees, the Phillies might have more free money than any contender.

7. Will a high-end, controllable starting pitcher emerge in the trade market?

Clubs such as the Braves, Brewers and Yankees have worked to ascertain whether somebody more inspiring than the 35-year-old Happ will suddenly become available. Everybody dreams of Jacob deGrom, but even if the Mets decided to seriously listen to offers for him -- something they should do -- they might already have run out of time to do the proper and thorough preparation needed to execute such an incredibly important trade. The farm systems of potential trade partners would need to be fully combed, the targeted prospects would need to be vetted, the full leverage would need to be wielded. It probably would be better for the Mets to keep deGrom into the winter and take more time to explore any offers than to try to throw together something, at a time when their leadership is under siege.
Report a correction or typo
Related topics:
sportsespntrade deadlinemlbzach brittondealslos angeles dodgerstradesrumorskenley jansenbuzz
Copyright © 2021 ESPN Internet Ventures. All rights reserved.
TOP STORIES
Newsom says vaccinated CA workers won't have to wear masks after June 17
Suspect arrested in hit-run death of Long Beach security guard
Video shows brazen theft at SF Walgreens store
SoCal heat wave expected to strain power grid
SoCal forecast: Excessive heat warning to take effect
Aiden Leos to be memorialized at Orange County Zoo
Evacuations lifted for brush fire in Lake Casitas area
Show More
SoCal woman overcomes homelessness after sudden job loss
GA cashier shot, killed after argument over face masks: Sheriff
Family pays tribute to OC man beaten to death outside own home
Disneyland dropping mask policy for fully vaccinated guests starting June 15
Former Delta flight attendant to face charges after LAX flight diverted
More TOP STORIES News