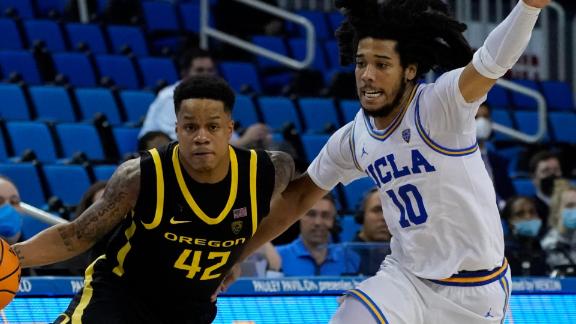 LOS ANGELES -- - Oregon had lost some close games before briefly getting shut down by COVID-19. The Ducks are finally turning a corner.


Will Richardson added 12 points as one of three Ducks in foul trouble. Oregon (10-6, 3-2 Pac-12) won its fourth in a row. The Ducks swarmed the court and their loud celebration in the locker room echoed throughout a mostly empty Pauley Pavilion.

"We haven't fought adversity well throughout the year, but we sure showed a little growth tonight," said Altman, who is 700-359 in his 33rd season as a Division I coach. "Really proud of the way they fought back."

Johnny Juzang had 23 points and nine rebounds, and Jules Bernard added 13 points for the Bruins (10-2, 2-1). Their second loss of the season ended a five-game winning streak.

"You're either humbled and hungry like they were trying to pull off the so-called upset, or you're arrogant without cause because we've won nothing," an incensed Bruins coach Mick Cronin said.

The teams traded baskets early in overtime. Young scored to put Oregon ahead by two. Jaime Jaquez Jr. missed a pair of free throws that would have tied it. Young scored again to give the Ducks an 83-79 lead.

Myles Johnson scored for UCLA before Richardson made one of two free throws for an 84-81 lead. Juzang's potential tying 3-pointer missed. Bernard got the rebound and put up a jumper that Da'Vion Harmon got his hand on as time expired.

"We've got talented guys, but we've got to come up with stops down the stretch and we just didn't do that," Juzang said. "You can't have that many mistakes."

The Bruins forced overtime on Jaylen Clark's steal and baseline layup that tied it 73-all with 16 seconds left. Richardson missed a 3-pointer for the Ducks and Bernard missed a 3 for the Bruins in the closing seconds.

Both teams had a player foul out in the five-minute extra session. The Ducks lost Eric Williams Jr., who had 10 points and eight rebounds. The Bruins lost Cody Riley, who had 11 points after picking up two fouls in the game's first 30 seconds.


The Ducks made just one 3-pointer in the first half, then came out and hit four to start the second half. It was part of a 16-2 run that gave them a 46-37 lead.

Peyton Watson and Tyger Campbell bookended a 14-4 spurt with 3-pointers that gave the Bruins a 51-50 lead.

After blowing a nine-point lead early in the half, the Ducks maintained a six-point cushion most of the way until the Bruins hit four straight free throws and Clark scored to force overtime.

UCLA pumped in fake crowd noise for the second straight game with only 119 relatives of coaches and players allowed in the arena because of surging COVID-19 cases.

"It didn't help," Cronin said of the empty seats, "but I don't believe in excuses."

Oregon: The victory was a huge lift for the Ducks, who were struggling with COVID-19 issues last week and had a game postponed. They came into LA riding the momentum of a two-point win over Oregon State in their rivalry game earlier this week. "The whole team's just coming along and it's just fun, exciting," Richardson said.

UCLA: The Bruins had numerous chances to win but missed too many shots. Bernard was just 3 of 13, Campbell was 3 of 10 and Jaquez was 2 of 6 from the floor. Among the starters, Riley shot 5 of 6 but missed four of five free throws.

Altman improved to 13-9 against UCLA and has won three in a row. The Ducks trail the all-time series 39-90. It was Altman's first visit to Pauley Pavilion since Cronin became UCLA coach in April 2019.

Cronin was still irritated by what he called "a horrible practice" a day earlier. He called it "our worst of the year."

"My job is to stop it and get their attention," he said. "Obviously, I failed miserably."

Oregon: Visits No. 5 Southern California on Saturday to close a three-game road stretch.