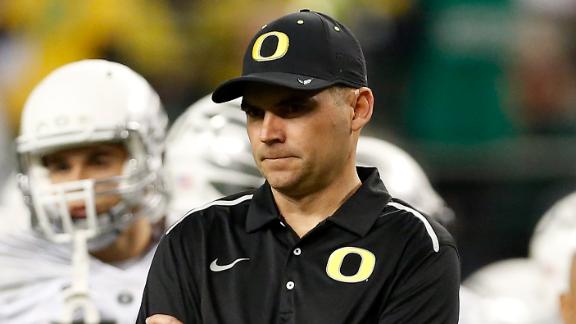 After leading Oregonto the inaugural College Football Playoff National Championship Presented by AT&T in his second season as coach, Mark Helfrich has been rewarded with a five-year, $17.5 million contract extension through the 2019-20 season, the school announced Monday.

"Mark has provided tremendous leadership of our football program and the values and character that he insists upon are in line with our mission as an institution," Oregon athletic director Rob Mullens said in a statement. "The success of our student-athletes on the field and in the classroom will continue with Mark's leadership and we are thrilled that he will stay at home in Oregon for a long time to come."

In the two years since being elevated from offensive coordinator upon Chip Kelly's departure for the NFL, Helfrich, 41, who grew up an Oregon fan, has guided the Ducks to a 24-4 record.

Helfrich's new deal also includes an automatic one-year rollover should the Ducks win at least 11 games, one of which being one of the New Year's Six bowls (Cotton, Fiesta, Orange, Peach, Rose or Sugar).

Before joining Kelly's staff at Oregon in 2009, Helfrich was the offensive coordinator at Coloradofor three years and served as the quarterbacks coach at Arizona State(2001-05) and Boise State(1998-00) before that. He started his coaching career as a graduate assistant at Oregon in 1997 under head coach Mike Bellotti.