Pacquiao: Metta can be 'good import' 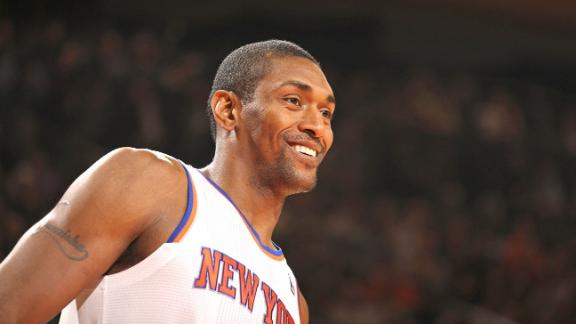 Pacquiao has become player/coach of the newly formed Kia Sorentos in the Philippine Basketball Association, adding to his other careers as a world-champion boxer and local congressman.

Local media this week quoted Pacquiao saying he intended to speak to the 34-year-old forward about joining the expansion team.

"He's OK. He's my friend," The Philippine Star quoted Pacquiao as saying of World Peace, whom he met in Los Angeles in 2009 ahead of his fight against Miguel Cotto.

World Peace, who changed his name from Ron Artest, is currently playing for the Sichuan Blue Whales in the Chinese Basketball Association after a long NBA career that included stints with the Chicago Bulls, Los Angeles Lakers and New York Knicks.

Early in his NBA career, he was known as much for a series of controversies -- most notably the fistfight with fans at an Indiana Pacers-Detroit Pistons game -- as he was for his on-the-field talent.

Pacquiao is currently in the United States on a promotional tour for his WBO welterweight title defense against American Chris Algieri on Nov. 22 in Macau.

At 5-foot-6, Pacquiao does not have the typical dimensions of a basketball player, but is a big fan of the sport and has funded the construction of courts in rural communities in his southern home province of Sarangani, where he sometimes plays with the locals.

Also this week, Pacquiao said that he has partnered with a Chinese company and the Chinese government to set up the Manny Pacquiao Boxing Education Institute in China to impart the experience that has given him eight world titles.