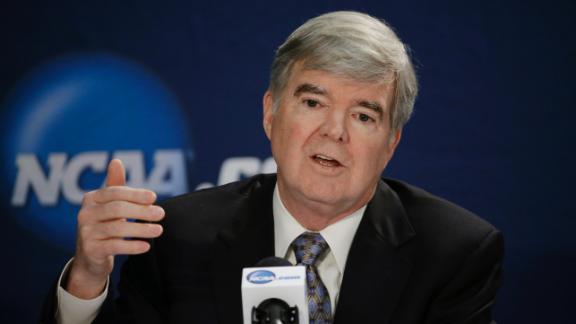 USCathletic director Pat Haden, who has a gay son, said Tuesday on Twitter that he will boycott the College Football Playoff committee meetings in Indiana this week in light of the state's newly passed religious freedom law that could take effect in July.

The selection committee is scheduled to meet Wednesday and Thursday in Indianapolis, which is hosting the Final Four and is home to the NCAA's headquarters.

"I certainly understand and respect Pat's position," College Football Playoff executive director Bill Hancock told USA Today Sports. "Everyone has the right to express their personal opinion, and Pat, to his credit, has expressed his. As a father and also a human being, I respect him for that. I will also express my personal opinion: I think they need to fix this.

"But my focus is on sports. Other people who are more knowledgeable that I am are better positioned to address this matter. Our group's focus will remain on sports."

Critics of the bill, which was signed by Gov. Mike Pence on Thursday, believe that it could be used by businesses and individuals to discriminate against members of the LGBT community based on those individuals' and those businesses' religious beliefs.

The law prohibits state laws that "substantially burden" a person's ability to follow his or her religious beliefs. The definition of "person" includes religious institutions, businesses and associations.

Pence, however, said Tuesdaythat he has been meeting with lawmakers "around the clock" and wants legislation on his desk by the end of the week to clarify that the state's new religious freedom law does not allow discrimination.

Businesses and organizations, including the NCAA and the NFL, have voiced concern over the effect of the law, and some states have barred government-funded travel to Indiana.

This isn't the first time that Haden has spoken out about his son or the importance of inclusion.

"This issue is near and dear to my heart as I have a gay son," Haden said in a blog on USC's website last March when asked about former Missouri football player Michael Sam and former NBA player Jason Collins, who are both gay. "I am so proud of him and love him to death. At USC, we are all about inclusion. We have many gay athletes here, and we welcome and appreciate them. We promote diversity not just in terms of sexual orientation and ethnicity, but different points of view. ...

"We discuss changing the culture around USC from the standpoint of what can we do better. Appreciate and respect one another. And, treat each other with dignity and fairness."

NCAA President Concerned With Indiana Law
NCAA president Mark Emmert talked to Andy Katz about his concern over a new Indiana law that could allow businesses to discriminate against gays and lesbians.

OTL Talkback: Indiana Religious Freedom Law, Part 1 of 2
Bob Ley hosts a discussion on the role that sports is playing in the ongoing debate of the Indiana religious freedom law.