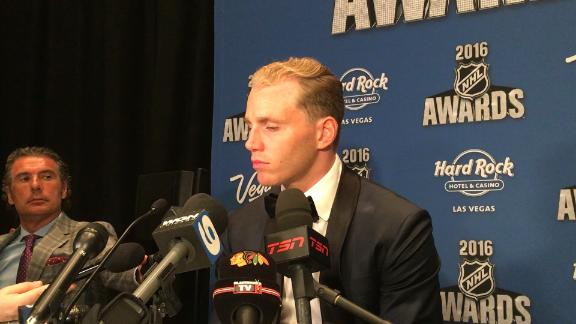 The NHL's scoring champion, Kane became the second U.S.-born player to win the Hart. Billy Burch was the first, winning it in 1925, the second year of the award's existence.

Kane also is the first Chicago player to win the Hart since Stan Mikita in 1968.

Earlier in the night, Kane won the Ted Lindsay Award as the NHL's outstanding player selected by his fellow players. He also received the Art Ross Trophy after becoming the first U.S.-born player to lead the league in scoring with 106 points.

Kane began his remarkable season under the cloud of a sexual assault allegation made against him in his native Buffalo area last summer. The Erie County District Attorney's office eventually declined to move forward on the case in November, saying it was rife with reasonable doubt.

At just 27 years old, Kane already has staked out a spot among the best American players in hockey history while winning three Stanley Cups with the Blackhawks, although they lost in the first round of the postseason this year.

"It's been quite a ride, obviously," Kane said. "A lot of great moments along the way. I feel like at 27 right now, hopefully, there's some more in the cards."

Holtby was rewarded for a remarkable season in which he tied Martin Brodeur's league record with 48 victories for the Presidents' Trophy-winning Caps. His goals-against average was fifth in the league at 2.20, and he finished eighth in save percentage at .922.

"I'm not a big guy on awards or records, but the wins record, we got to share as a team," Holtby said. "The commitment it took to make that possible was definitely cool to be a part of."

Holtby's coach, Barry Trotz, won the Jack Adams Award as the NHL's coach of the year, beating out Lindy Ruff of the Stars and Gerard Gallant of the Panthers. Trotz earned the award for the first time by leading the Caps to an NHL-best 120 points this season, setting a franchise record with 56 victories.

Doughty, the two-time Stanley Cup champion and two-time Olympic gold medalist, didn't match his competitors' offensive production, but voters recognized his two-way prowess for the defense-minded Kings. Doughty led all defensemen in Corsi percentage at 58.9, and he scored 51 points with a plus-24 rating while playing enormous minutes on the Kings' depleted blue line.

"To my teammates, without you, I couldn't have done it," said Doughty, who won the Norris for the first time. "You guys are everything to me, and we're brothers for life."

Karlsson, who won the Norris last year, scored a whopping 82 points for the Senators, the most by an NHL defenseman in 20 years. He also played nearly 29 minutes per game but finished with a minus-2 on a non-playoff team. Burns nearly matched Karlson with 75 points, including 27 goals.

Kopitar became the Kings' first Selke Trophy winner one week after he was named team captain.

Kopitar has been the Kings' leading scorer for nine consecutive seasons, but his willingness to embrace coach Darryl Sutter's defense-first mindset was a major reason for Los Angeles' run to two Stanley Cup titles in three years from 2012 to 2014.

Kopitar led all NHL forwards in ice time, averaging nearly 21 minutes per game, while finishing second in the league with a plus-34 rating. His puck possession skills and backchecking acumen were key factors in the Kings' finishing third in the league in team defense.

Kopitar was a finalist for the award in each of the previous three seasons. He beat out three-time winner Patrice Bergeron ofBostonandAnaheim'sRyan Kesler, the 2011 winner.

Kane's linemate in Chicago,Artemi Panarin, won the Calder Trophy as the NHL's top rookie, beating outPhiladelphia'sShayne Gostisbehere andEdmonton'sConnor McDavid, whose dynamite season was shortened by two months because of a broken collarbone.

Panarin scored 77 points in 80 games during his debut season in North America, leading all rookies in goals (30) and assists (47).

Kane and Panarin credited each other for their statistical success, along with linemateArtem Anisimov.

"It goes without saying how our chemistry developed over the year and how much fun we had playing with each other," Kane said. "There's no doubt [Panarin] was a huge part of my success. I'll take it one step further and say Anisimov was a huge part as well. Never really been on a line that was together for a whole season. Pretty much for the full 82 games, I was playing with both of those guys. It was a lot of fun. Hopefully we can be together for a long, long time and build off that experience."

In other awards handed out Wednesday:

-- Florida's Jaromir Jagr won the Masterton Trophy for his perseverance, sportsmanship and dedication to hockey.

-- Anaheim's Frederik Andersen and John Gibson won the William M. Jennings Trophy, awarded to goaltenders playing in a minimum of 25 games for the team with the fewest goals allowed. 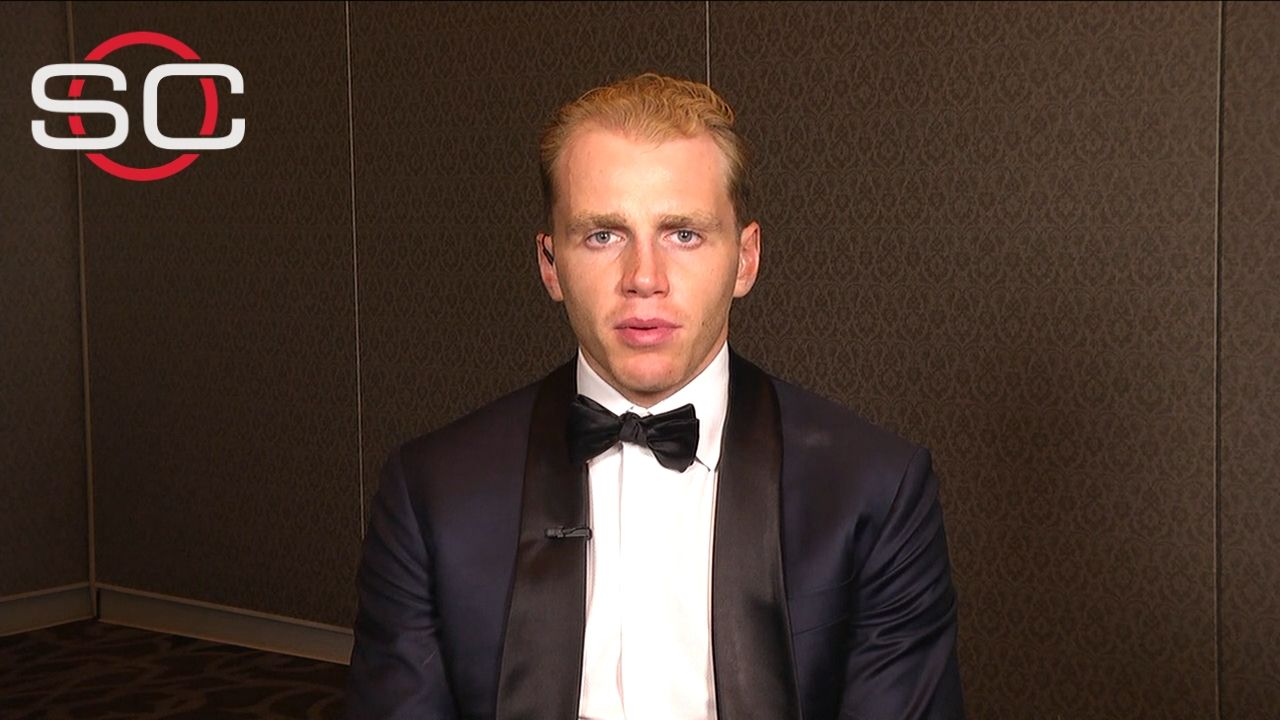 Kane: Consistency key to winning MVP and scoring title
Patrick Kane joins SportsCenter to explain how he was able to win the Art Ross Trophy and the Hart Trophy, what he'd like to accomplish next as a player and how he feels about the NHL coming to Las Vegas.