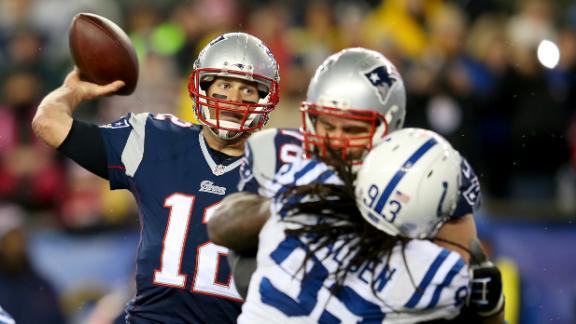 A locker room attendant for the New England Patriots tried to introduce an unapproved special teams football into last month's AFC Championship Game, the same game at the center of the "Deflategate" allegations, four sources familiar with the investigation told "Outside the Lines."

One source said that the attendant assigned to the officials' locker room, identified as 48-year-old Jim McNally, has been interviewed by investigators for Ted Wells, the attorney the NFL hired last month to lead an investigation into allegations the Patriots intentionally used underinflated footballs on offensive plays in the first half of that game against the Indianapolis Colts, which New England won 45-7.

Three sources said that McNally has worked Patriots games for a decade, and has been in charge of the officials' locker room at Gillette Stadium since at least 2008. In the first half of the AFC Championship Game, the sources said, McNally tried to give the unapproved football to an alternate official who was in charge of the special-teams footballs. Those footballs are known as "kicking balls" or "K balls."

Before every NFL game, footballs are inspected and measured by NFL officials in their locker room before they can be approved for in-game use. The "K balls" are used for special teams, and not by the offenses of either team.

The alternate official, Greg Yette, became suspicious when he noticed that the football McNally handed him did not have the proper markings on it, three sources said. One of those sources added that Yette found it surprising that the officials' locker room attendant was on the field, trying to hand him a ball, because officials' locker room attendants don't typically have ballhandling responsibilities during NFL games. Once McNally tried to introduce the unapproved football into the game, the source said, Yette notified the NFL's vice president of game operations, Mike Kensil, who was at the game in the press box.

Sources said they are not sure at what point during the first half McNally tried to introduce the impermissible football to Yette. They didn't know his motivation for doing so, either. Yette, when reached by "Outside the Lines," declined to comment.

An "Outside the Lines" reporter approached McNally at his home in Amherst, New Hampshire, earlier this month, but he said, "I can't talk to you," waving the reporter away as he walked up his driveway.

McNally is a part-time employee who was hired by The Kraft Group, a company owned by Patriots owner Robert Kraft. Kelly Way, the director of operations for TeamOps at Gillette Stadium, said NFL game-day employees are paid by The Kraft Group. McNally is not listed in the Patriots' main switchboard directory.

It is not known whether McNally is the same locker room attendant who reportedly ducked into a bathroom with a bag of footballs for 90 seconds before taking them out to the field before the start of the AFC Championship Game. On Jan. 26, FoxSports.com's Jay Glazer reported that a locker-room attendant from the Patriots allegedly took footballs "from the officials locker room to another area" on the way to the field, and that Wells' investigators have video of that. Pro Football Talk later reported that the attendant stopped in a restroom with the game balls for 90 seconds. That locker room attendant, according to Foxsports.com, is a "strong person of interest."

The Patriots, who won the Super Bowl over the Seattle Seahawks on Feb. 1, came under scrutiny prior to the AFC Championship Game, when the Colts reportedly alerted the NFL during the regular season that the Patriots may be using underinflated footballs after the teams met Nov. 16.

A source told "Outside the Lines" that Kensil decided to personally go down to the officials' locker room at halftime of the Patriots-Colts game to check the game balls, in part because of the suspicions McNally's actions raised. Kensil did not respond to requests for comment.

It has also been reported that the Colts noticed an underinflated football after an interception by linebacker D'Qwell Jackson in the AFC Championship Game. Jackson said at the Pro Bowl that he didn't notice that the football was underinflated. Also, Troy Vincent, the NFL's executive vice president of football operations, told "60 Minutes Sports" that Colts general manager Ryan Grigson told league officials in the second quarter of the AFC Championship Game that the Patriots might be tampering with footballs.

One source said Kensil personally checked the PSI (pounds per square inch) levels of all 12 footballs the Patriots had for use on offense and found that 11 of those 12 were underinflated by "one to two pounds." Last month, league sources involved and familiar with the investigation told ESPN's Chris Mortensen that the investigation found the footballs were inflated 2 pounds per square inch below what's required by NFL regulations.

They were reinflated to the league-required level and were returned for use in the second half.

Patriots coach Bill Belichick has attributed the 11 underinflated game balls to atmospheric conditions and has said the Patriots "try to do everything right; we err on the side of caution." Kraft, in a strong defense of his head coach and quarterback Tom Brady, said: "I want to make it clear that I believe unconditionally that the New England Patriots have done nothing inappropriate in this process or are in violation of NFL rules."

He added, "I would expect and hope that the league would apologize to our entire team" if the Wells investigation "is unable to definitively determine that our organization tampered with the air pressure in the footballs."

In a statement released late last month, Wells said he expected his investigation to go on for "at least several more weeks" and asked that "everyone involved or potentially involved in this matter avoids public comment concerning the matter until the investigation is concluded. The results will be shared publicly."

Dean Blandino, the NFL's head of officiating, said at a Super Bowl news conference: "There was an issue that was brought up during the first half, a football came into question, and then the decision was made to test them at halftime. There's an investigation going on. I can't really get into specifics."

When asked for comment by OTL, Blandino texted, "I can't elaborate with the investigation still ongoing."

The NFL, through a spokesman, told OTL: "We're not commenting on the details of the ongoing investigation."

This story was updated to fix an attribution on the Patriots' locker room attendant stopping in a restroom for 90 seconds.

Investigators Talk To Staffer About Pats' Use Of Underinflated Balls
Adam Schefter and Sal Paolantonio have the latest on Ted Wells' investigation into the Patriots using underinflated balls in the AFC Championship Game and a locker room attendants attempt to introduce an unapproved special teams football.