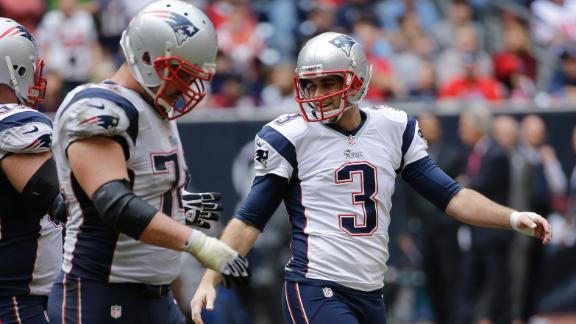 "Stephen has been extremely productive and a vital component to our success since joining our team in 2006," the team said in a statement. "Utilizing the franchise designation allows both sides more time to try to reach an agreement, which is the goal."

Gostkowski, who has played his entire career with the Patriots after being selected in the fourth round of the 2006 draft as the team's replacement for Adam Vinatieri, was the NFL's leading scorer in 2014 with 156 points.

A Pro Bowler in each of the past two seasons, Gostkowski has one of the strongest legs in the NFL, which the Patriots have valued as a team based in the Northeast often playing in adverse conditions.

Gostkowski's strong leg was reflected in his 53 touchbacks during the 2014 regular season, which tied for fifth most in the league.

The 31-year-old was 35-of-37 on field goals in 2014 while hitting all 51 extra points that he attempted. He became New England's all-time leading scorer in 2014, passing Vinatieri.

The Patriots have used the franchise tag on kickers in the past, twice tagging Vinatieri in 2002 and 2005.