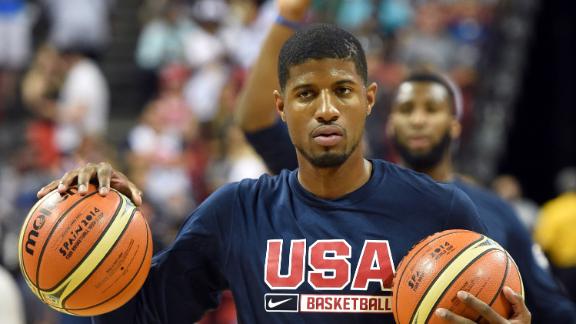 Despite Paul George's absence, the Indiana Pacers will surely sell some of his jerseys this upcoming season, but they will bear a different number.

George applied for and was granted the right to switch from No. 24 to No. 13, sources told ESPN.com.

Because George applied for the change before the March deadline, he doesn't have to pay for the remaining old No. 24s on the market. Sources, however, said he still elected to do so.

Per league rules, a player who changes jersey numbers on the same team must buy up all of the old jerseys on the market.

The idea might have come from ESPN's Bill Simmons, who first mentioned the idea on Grantland in May 2013.

"By the way, I have some advice that will help Paul George become a household name," Simmons wrote. "He should change his number immediately from No. 24 to No. 13. Here's why ... can you think of anyone being helped by a nickname more than Paul George suddenly becoming PG-13? 'Uh-oh, PG-13 is heating up!' 'Warning, this game contains strong language, violence and a possible heat check!' 'We might have to make this performance rated R -- it's too hot to handle!' Let's make this happen already."

George liked the idea when asked about it on Jimmy Kimmel in January. "That's got a ring to it, PG-13," George said at the time.

He has been dropping hints of the change to fans. Over the past month, he has tweeted trece, which means 13 in Spanish, seven times.

George finished last season 15th in the league in jersey sales, according to sales at the NBA Store in New York City and the online NBA Store.

The switch will be the second-most high-profile number switch in the league next season. LeBron James, of course, has changed his number from 6 back to 23, but he did not have to file for a change because he switched teams.

George suffered a compound fracture to his right leg during a Team USA scrimmage earlier this month.