ESPN
By Adrian Wojnarowski
After missing three months with an elbow injury, LA Clippers All-Star guard Paul Georgereturned to help his team rally from a 25-point deficit to beat the visitingUtah Jazz121-115 on Tuesday night.

He started and scored 34 points on 10-of-20 shooting (6-of-9 from 3), adding 6 assists, 2 rebounds and 4 steals in 31 minutes. Coach Ty Lue said before the game that George would be on a minutes restriction.


George's 34 points were the most ever by a player who had missed their team's previous 40-plus games within one season, according to Elias Sports Bureau research. George now has more 30-point games this season (7) than the rest of the Clippers team combined (6).

George, who hadn't played since Dec. 22, completed rehab on a torn ulnar collateral ligament in his right elbow, was upgraded to questionable on Monday and passed the final hurdles to make his return at Crypto.com Arena.

He ramped up for his return in recent days, participating in 5-on-5 practices on Sunday and Monday.


George, 31, returned to a Clippers team now holding a 37-39 record, firmly in the eighth spot in the Western Conference playoff chase. The Clippers are hopeful that they'll get guard Norman Powell back ahead of the playoffs in mid-April, although there's less optimism about a Kawhi Leonard return amid his ACL rehab. 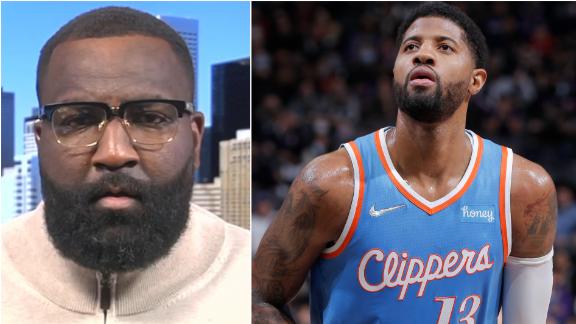