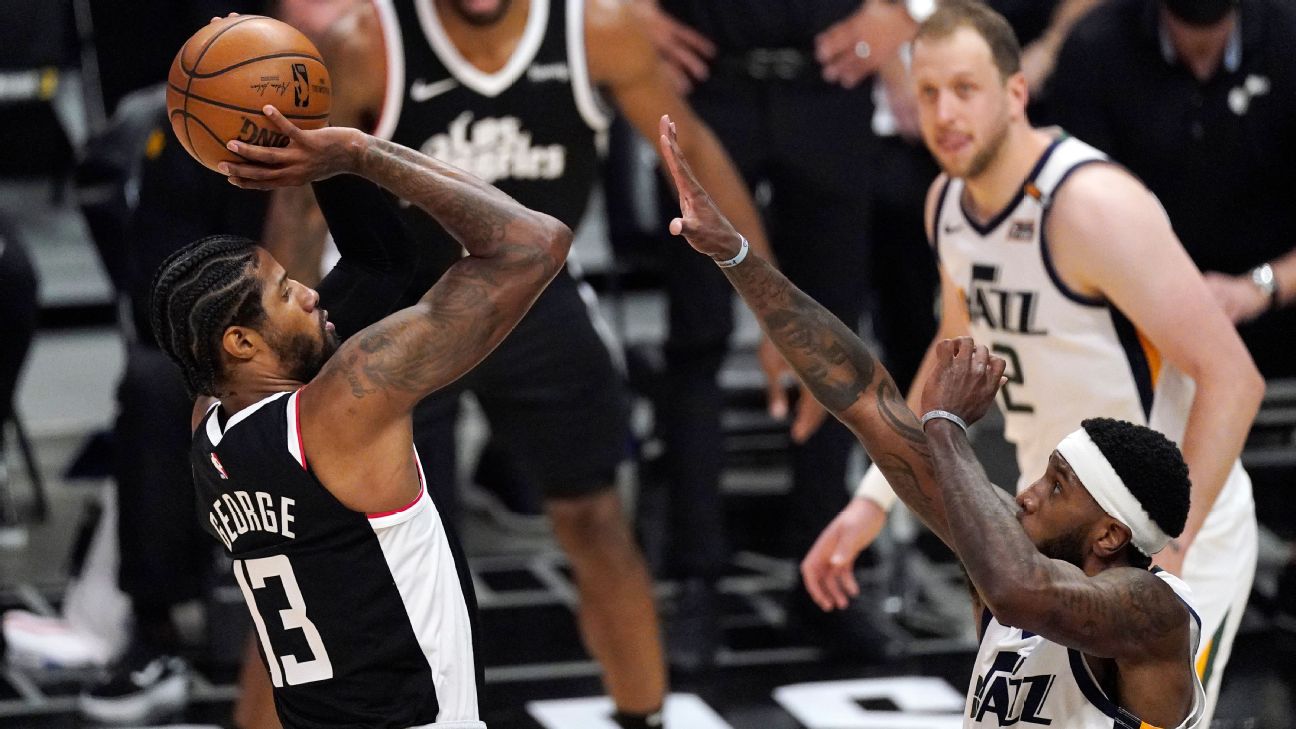 LOS ANGELES --Paul George used a cross-over dribble to move to his left before drilling a rainbow step-back 3-pointer overRoyce O'Nealeand letting out a scream.

After hearing Jazz fans chant "overrated" at him for two games in Utah, an aggressive George had his best game of the playoffs, scoring 20 of his 31 points in the first half to set a much-needed tone for the LA Clipperson Saturday night. Kawhi Leonard then scored 24 of his 34 points in the second half to help the Clippers rout the Utah Jazz, 132-106, and get their first win of this Western Conference semifinal series.


George's first 30-point game since April 23 came when the Clippers needed it to keep their title hopes alive. The Clippers now can even the series at 2-2 with a win at home Monday night in Game 4.

George found his rhythm and got hot, burying 6 of 10 3-pointers, four coming in the first half while playing with even more confidence on his home floor. After he hit the step-back 3 over O'Neale, George buried a 32-foot 3 and held his follow-through pose with confidence as the Clippers opened a 57-41 lead with 2:54 remaining in the first half. The Jazz never got any closer than eight in the third quarter.

"Oh, we're a different team," Clippers coach Ty Lue said of when George has his offense going early. "We know that. It's been like that all season long. He's been great. You know, he had one bad game, whatever, but people are going to have bad games."

George scored 20 points in Game 1 but Utah fans badgered him whenever they could as he shot 4-for-17 in Game 1. In Game 2, George scored 27 points and shot 8-for-18, but Jazz fans love taunting him dating back to when George was with Oklahoma City and the Thunder played Utah in the 2018 playoffs. George also has seen his fair share of Joe Ingles defending him, as the two have had their back-and-forth.

When asked what his relationship is with Ingles, George said, "I don't care about him. Next question."

For the Clippers, there is no question how good they can be when George and Leonard shift their games to another level like they did on Saturday. Not only did they combine to make 26 of 48 shots but they also took the challenge of slowing down Donovan Mitchell.

While Mitchell finished with 30 points before tweaking his sore right ankle, he was held scoreless for the first 16 minutes and 26 seconds of the game. After contesting 71% of his field goal attempts in the first two Jazz wins, the Clippers contested all but one of Mitchell's 24 shots in Game 3, according to ESPN Stats & Information research.


"We just made an emphasis that he's not going to beat us tonight," George said of Mitchell, who played just four minutes and 55 seconds in the fourth quarter to rest his ankle with the game out of hand. "We're going to force everybody else to play and we're just not going to let him walk into shots tonight and get the looks that he wanted early tonight."

Lue challenged his team to defend Mitchell better 1-on-1, but the Clippers also sent some doubles at the Jazz' scorer, who scored 45 and 37 points in Games 1 and 2.

Mitchell did not score when defended by George on two shots and scored four of his points when guarded by Leonard.

After losing the first two games of first round at Staples Center against Dallas before winning the next two on the road to even the series, the Clippers will try to rebound from their second straight 0-2 deficit at home. No team in NBA playoff history has ever successfully overcome a 2-0 deficit and win multiple times in the same postseason.

They'll take the momentum of their most decisive win of the playoffs, and Leonard and George playing one of their best games together, into a critical Game 4. The Clippers improved to 5-0 in the regular season and playoffs when their two All-Stars score 30 points or more each in a game together.