Paul Pierce, 37: 'These seasons get harder and harder every year' 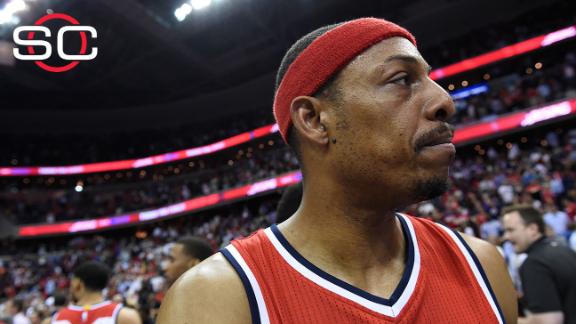 WASHINGTON -- After seeing his would-be, overtime-forcing 3-pointer waved off at the end of Game 6, Paul Pierce walked off the floor wondering how much more of these he has left in him.

Pierce, 37, said his future is uncertain after the Wizards were eliminated 94-91 by the Atlanta Hawks on Friday night. The Hawks advanced after a video review showed Pierce's dramatic 3 was still on his fingertips as the clock expired.

The 17-year veteran will decide later with his family whether to exercise a $5.5 million player option to return for the final year of his contract.

"I haven't really thought about it," Pierce said more than an hour after the loss at the Verizon Center. "I don't even know if I am going to play basketball anymore. These seasons get harder and harder every year, every day. Summers get even harder when you start getting back in shape. I'm 37 years old. I'm top two or three oldest in the league."

Pierce, the one-time NBA champion and veteran of three teams, was the eighth-oldest player in the NBA this season.

It would be somewhat surprising if Pierce retired. Not only did he show he can still hit clutch shots this postseason, but he has repeatedly talked about how much he has enjoyed mentoring young stars such as John Wall and Bradley Beal during his first season in Washington. Pierce also told ESPN's Jackie MacMullan last month he expects next season to be his last.

But the pain of losing this closely contested series with Atlanta stung Pierce hard. Long after the Game 6 loss, he remained slumped in front of his locker stall still in uniform while many of his teammates already had showered and dressed.

Pierce appeared to prolong the Wizards' season when he slipped by Al Horford and Kyle Korver and buried an improbable fadeaway 3-pointer from the corner at the buzzer that appeared to tie the game at 94. But officials waved off the shot after seeing the replays.

Pierce eliminated Toronto in the first round for the second straight postseason by averaging 15.5 points and shooting 58.3 percent from behind the 3-point arc.

In Game 5, Pierce knocked in a go-ahead 3 with 8.3 seconds remaining and yelled, "Series!" at the Hawks. But Atlanta won that game and took a 3-2 lead in the series on Horford's putback with a second remaining.

And then Washington's season ended in painful fashion with Pierce's fingertips deciding a series for the second straight postseason. Last year, Pierce helped the Brooklyn Nets beat the Raptors in Game 7 of the first round with his game-winning block on Kyle Lowry.

"Truthfully, what was going through my mind, I don't have too much more of these efforts left, if any," Pierce said of what he was thinking as he walked off the floor on Friday night. "These rides throughout the NBA season and throughout the playoffs are very emotional. They take a lot, not only out of your body, but your mind, your spirit.

The Wizards have made it clear they want Pierce back and have expressed how much better they have become because of him.

"He's a great leader, great mentor," Wall said. "Just seeing his competitive drive and how hard he works, being the first and last guy here, never making excuses, that is something we can use.

"Just to see his footwork, his competitive drive, how he talked junk, how he wanted to make the big shots, how he had so much confidence, he has built that in us."

Wall said a large part of his motivation to return and play in Games 5 and 6 with a fractured hand/wrist was because of Pierce and how he didn't know how many more of these runs the veteran had left.

Pierce, who averaged 11.9 points this season, says he will need time to think about his future with his family.

"Just see how my body feels, how it responds ...It is tough when you go through these 82-game grinds," said Pierce, who admitted he was playing most of the second half of the season with pain in his knee. "You got ups and downs throughout the regular season. I definitely felt it for the most part. I love the game.

"I have been playing this game [for] like 32 years. Since I was a little kid. Probably going to be the hardest thing to do is put the game down. But I know that time is coming one day. I am not sure if it is this year or next year. I will sit down with my family and figure things out."

Pierce uncertain of future
Seventeen-year veteran Paul Pierce says his future is uncertain and he will have to decide along with his family whether he should retire after his would-be game-tying 3-pointer was waved off at the end of the Wizards' Game 6 loss.