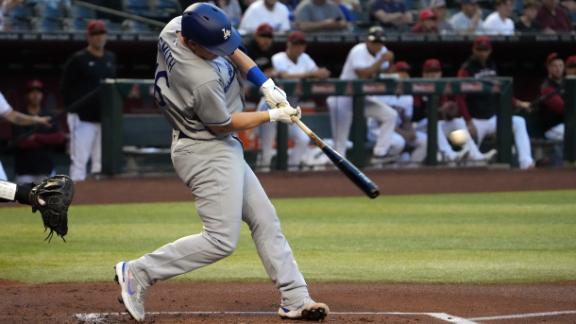 PHOENIX -- - The Arizona Diamondbacks combined a big hit with the sound defense they've been looking for all season in a 5-3 victory over the Los Angeles Dodgers on Tuesday night.

David Peralta hit a two-run homer to break a tie in the eighth inning, and the left fielder also started one of Arizona's five double plays as the Diamondbacks beat the Dodgers for only the fourth time in their last 21 meetings.

The Diamondbacks, who had more double plays than hits (four), had a major league-low .185 batting average and led the NL with 17 errors entering the game. But none of that mattered after Peralta connected off Brusdar Graterol for his 100th career homer.

"One-hundred is good, but even better is winning," Peralta said. "I wanted to do something special for the team all game long, and everything came through."

Peralta's homer - Arizona's fourth hit and his second - snapped a 3-all tie and paused the Dodgers' series dominance.

Los Angeles, which led 3-0, will go for its 10th straight series victory over Arizona on Wednesday after splitting the first two games of this set. The Dodgers are 25-6 against the Diamondbacks since the start of the 2020 season.

"Thought they were engaged from the first pitch on, and that's been something that has been bothering me a little bit," Arizona manager Torey Lovullo said of his defense. "I thought we've been kind of working into the game defensively, and nobody is good enough to do that."

The Diamondbacks also picked a runner off first base. Their two biggest double plays came late - Peralta raced into the gap to catch Mookie Betts' liner with runners on first and second, then threw to second to double off Chris Taylor to end the seventh.

"I was going for the ball, and I peeked a little bit and saw he was still going," Peralta said. "I'm like, that's a mistake they have to pay for. When they make a mistake, you have to make them pay."

Ian Kennedy (1-1) got Will Smith to ground into a bases-loaded double play to end the eighth.


"It was just a bad read," Taylor said of getting doubled off. "For some reason I thought he hit the ball off the end of the bat and thought it was going to be down. Tried to get a good jump and score but it stayed up and he caught it. Can't happen."

Taylor had two of the Dodgers' nine hits.

"That's the first one in quite some time where I felt we gave it away," manager Dave Roberts said. "Had opportunities. Couldn't capitalize."

Mark Melancon worked a perfect ninth for his third save.

Zach Davies, who pitched the first six innings of a combined no-hitter for the Cubs against the Dodgers last June, wasn't sharp this time. He gave up two hits and two walks in a three-run first inning - all the runs scored on Smith's bases-loaded double.

Dodgers shortstop Trea Turner has reached base in all 17 games this season and 36 straight since 2021 after walking twice and singling.


He was tied for third in the NL with 15 RBI after leading the NL with a .328 batting average with Washington and Los Angeles in 2021.

"Trea is a guy who puts the ball in play, doesn't punch (out) a whole lot," said Roberts, who is batting Turner third in the order. "There should be RBI opportunities."

Dodgers: RHP Tommy Kahnle (Tommy John surgery) is scheduled to make back-to-back minor league rehab appearances Wednesday and Thursday and could rejoin the team for a two-game series against San Francisco on May 3-4, Roberts said. ... RHP Dustin May (Tommy John surgery) threw about 30 pitches in a bullpen session. ... LHP David Price (COVID-19) has no timetable for his return, Roberts said, adding that no teammates have reported COVID-19 symptoms. ... LHP Victor Gonzalez (elbow) threw a bullpen and is nearing the start of a rehab assignment. ... LHP Tyler Anderson will remain in the rotation while Andrew Heaney (shoulder) recovers, Roberts said. Anderson's next start will be Friday against Detroit.

Diamondbacks: INF/OF Josh Rojas (oblique) has begun hitting off a pitching machine but has no timetable for a return.