Peyton Hillis rises to No. 2 RB 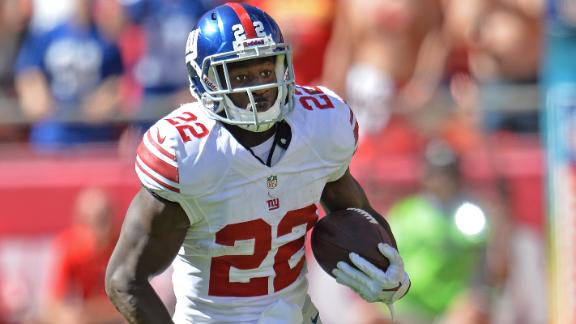 EAST RUTHERFORD, N.J. -- Former "Madden" cover boy Peyton Hillis has moved up to No. 2 on the New York Giants' running back depth chart in the wake of Monday's news that former first-round pick David Wilson's career is over due to neck injuries.

Rashad Jennings is the starting running back, but the Giants feel it's important to have a strong rotation at the position. Hillis and rookie Andre Williams are the two backs who appear to have the best opportunities to take the snaps that had been slated for Wilson.

"I haven't really thought about that," Williams said before Tuesday's practice. "I think what's going to affect my ability to get on the field is how prepared I am and having the coaches and players around me gain confidence in my ability."

Sunday night helped with that, as Williams was the second running back on the field for the Giants in the preseason Hall of Fame Game against Buffalo. He rushed for 48 yards on seven carries, including a 21-yarder to get the ball to the 3-yard line. He scored a touchdown on the next play.

"That was what we expected," coach Tom Coughlin said of Williams' performance. "That's why we drafted him."

Hillis rushed for 36 yards on seven carries against the Bills.

The Giants picked Williams, who was the NCAA's leading rusher last year at Boston College, in the fourth round of this year's draft. To gain a more significant role in the offense as a rookie, Williams has to prove he can be a contributor in the passing game -- both as a receiver and a pass-protection blocker.

"I have the pass protection down to a good degree," Williams said. "I think the thing they look for, first and foremost, is just making sure the running back knows who he has in protection. The technique can always be worked on."

The Giants wanted to give Williams time with the first team Sunday to help them determine whether he can accelerate his development quickly enough to contribute right away. If not, they believe they have a viable option in Hillis while Williams continues to improve in practice.

"I think we have a lot of guys who can go out there and produce," Hillis said. "I still think it's going to be a great running back group. I do. I think we've really improved the offensive line, and I think we have backs in the backfield that can hit. So I think we can have a great group."

Because they weren't sure whether they could count on Wilson to return, the Giants signed Jennings, re-signed Hillis and drafted Williams. The other running backs on the roster are Kendall Gaskins and Michael Cox.