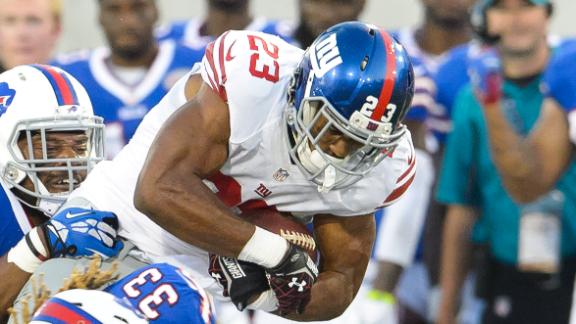 EAST RUTHERFORD, N.J. -- The New York Giants are down another running back.

The Giants officially called the injury a sprained ankle Tuesday, but coach Tom Coughlin was more vague when asked about it on Wednesday.

"It's an ankle/foot kind of thing," Coughlin said. When asked whether he knows how long Hillis will be out, Coughlin responded, "I don't. It looks like it'll be a little while."

Hillis was promoted to No. 2 on the depth chart after Wilson was placed on injured reserve. Now the Giants are left with starter Rashad Jennings and three inexperienced backups in Andre Williams, Michael Cox and Kendall Gaskins.

"The way they talk, if I rest it and get treatment on it, hopefully I'll be back as soon as possible," Hillis said. "They haven't let me know when, but I'm looking to be back pretty early."

Williams, third on the depth chart, was impressive in the team's preseason opener against the Bills. But Cox, a seventh-round draft pick in 2013, got just 22 carries in his rookie season. And Gaskins, an undrafted free agent in 2013, has yet to play in a regular-season game.

Coughlin indicated the team will not sign another running back at this point. "Right now it's probably not our thought," Coughlin said. "But if this thing goes on and on with Hillis, then we would have to do something."

He also said the team's two fullbacks, Henry Hynoski and John Conner, could play running back, too. Those two have a combined 26 carries in the NFL.

In other injury news, starting left guard Geoff Schwartz will not practice Wednesday because of a sore knee. Schwartz tried to practice Tuesday but had to come out. He was replaced by rookie second-round draft pick Weston Richburg.

Wide receiver Odell Beckham, the team's first-round pick, hasn't practiced since July 22 because of an injured hamstring, but he may be back soon.

"It sounds like he's getting close," Coughlin said. "They're gonna push him a little bit more today, and then they're gonna get a quarterback to throw to him and see how that goes."

But wideout/kick returner Trindon Holliday, also suffering from a hamstring injury, isn't doing as well. "I wish Trindon Holliday was in the same boat," Coughlin said. "It doesn't seem like he is quite as far along."