Phillies in talks to trade Papelbon 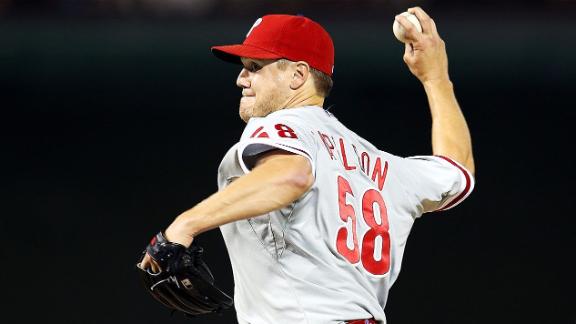 The Philadelphia Phillies have engaged in discussions to send closer Jonathan Papelbon to the Milwaukee Brewers, according to ESPN sources and multiple media reports.

Papelbon's contract, which calls for a $13 million salary this season with a $13 million option for 2016 that vests if he finishes 48 games this year, includes a no-trade clause that can block deals to 17 teams.

A source told ESPN that Papelbon can block a trade to the Brewers, but would waive that if the vesting option for 2016 is guaranteed.

A trade to Milwaukee is not imminent, sources said.

The Phillies' desire to trade Papelbon is no secret as they start a massive rebuild that already has seen more than $40 million shaved off their estimated opening day payroll.

The 34-year-old Papelbon had 39 saves and a 2.04 ERA last season, but his flagging velocity and perceived negative attitude -- Papelbon was suspended for seven games last September after grabbing his crotch following a blown save -- led to them looking for a trading partner.

The Brewers, who traded Yovani Gallardo to the Texas Rangers earlier this week, have expressed interest in acquiring late-inning relief help.