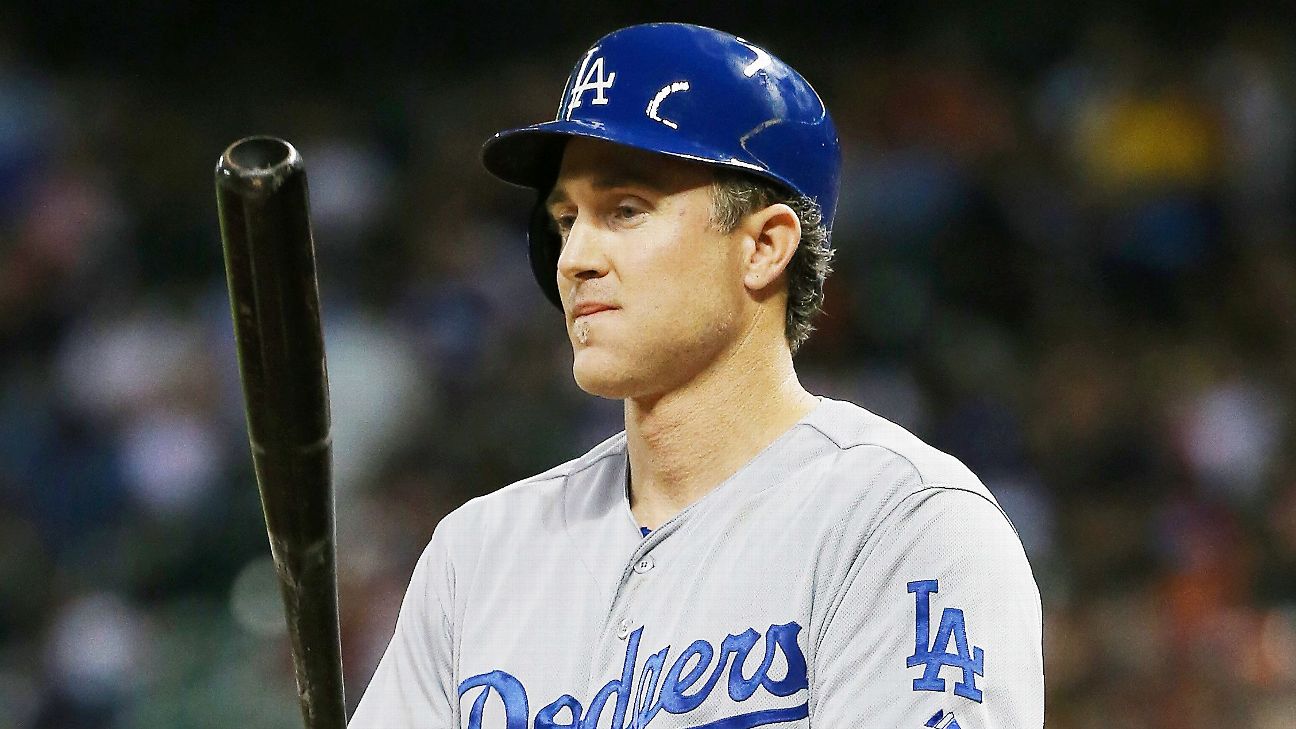 PHILADELPHIA -- When Chase Utley announced his pending retirement July 13 in Los Angeles, he had July 23 in Philadelphia in mind. Utley declared his intentions out of courtesy to Phillies fans, even though the prospect of all that love and affection in his return to Citizens Bank Park made him squirm.

Unless the Phillies and Dodgers meet again in the postseason, this week's series will mark Utley's final trip to Philadelphia as a visiting player. A crowd of 33,753 didn't waste an opportunity to show Utley that he is -- and always will be -- beloved in this city.

Utley popped out of the dugout and waved when PA announcer Dan Baker announced his name during pregame introductions, and he received a second, 50-second ovation when the public address system played his old Phillies walk-up song, Led Zeppelin's "Kashmir,'' before his first plate appearance. Then came ovation No. 3, when many fans stood and cheered as he flied out to the warning track against Phillies starter Zach Eflin.

Before the night was through, Max Muncy, Yasmani Grandal, Chris Taylor and Joc Pederson hit solo homers, and the Dodgers rallied to beat the Phillies 7-6. But from a sentimental perspective, the night belonged to Los Angeles' silver-haired, 39-year-old, part-time second baseman.

"It was a lot of fun,'' Utley said. "It was a long game. It was intense, and it was a little emotional. I don't know why it's so nerve-wracking during that first at-bat, but it really is. The fans here in Philadelphia mean a lot to me, and the respect they've showed me over the past three years is something very, very special.''

Utley established himself as one of the most popular athletes in Philadelphia sports history with his leadership, production and fundamentally sound play during the Phillies' run of first-place finishes from 2007 through 2011. He made five All-Star teams and won four Silver Slugger Awards before injuries put a crimp in his skills and his playing time. In August 2015, the Phillies traded Utley to the Dodgers for minor leaguers Darnell Sweeney and John Richy.

Monday's game was a wall-to-wall homage to Utley's tenure in Philadelphia. From one at-bat to the next, the outfield scoreboard flashed photos of him in the Long Beach Little League, turning a double play as a collegian at UCLA and signing his first professional contract with the Phillies as a first-round draft pick in 2000. There was also a video montage of Utley highlights with accompanying sound from Hall of Fame broadcaster Harry Kalas.

"It was awesome,'' Dodgers manager Dave Roberts said. "It's great when a fan base shows their admiration, love and respect for a player who's done it the right way. I thought he was going to get the game-winning hit, but it didn't work out that way.''

After a first-inning fly ball, Utley didn't have much luck at the plate. He grounded out with the bases loaded, was robbed of a hit on a diving catch by Phillies center fielder Odubel Herreraand finished the night 0-for-4 when Tommy Hunter snagged his sharp comebacker and threw him out at first base in the eighth inning. The box score line was nothing like Utley's first trip to Philadelphia as a Dodger in August 2016, when he hit two home runs in a 15-5 Los Angeles victory.

Before the game, Utley answered questions on a variety of topics from the Philadelphia media for almost 20 minutes. He took a pass when asked if his career achievements are Hall of Fame-worthy and said he has yet to decide if he's interested in managing or coaching one day. He only knows that he would like to remain involved in baseball in some capacity.

Utley waxed nostalgic about his relationship with Phillies fans, several of whom told him through the years that they named their sons "Chase'' in his honor. He expressed disappointment that he won't be in Philadelphia on Aug. 5 to take part in the 10-year anniversary celebration of the Phillies' 2008 World Series victory over the Tampa Bay Rays.

Utley and the Dodgers will be wrapping up a three-game series in Houston that day. But Utley has made a point to keep in touch with Jimmy Rollins, Ryan Howard, Shane Victorino, Jayson Werth, Pat Burrell and several other old Phillies teammates through the years.

"I talked to Jimmy the other day, and we were giving each other compliments back and forth -- how I made him better and he made me better,'' Utley said. "It's hard to put into words what it was like to play here, with the electricity the crowds gave us. But I think that guys on their way from the minor leagues and guys who were in high school and college watching baseball at that time had a pretty good look at how to play baseball the right way. If you're a student of the game, those teams were a very good template to look at.''

Dodgers utilityman Kike Hernandez, who attended Utley's news conference as a show of respect and admiration, wears a white T-shirt with a photo of Utley across the front. He latched onto Utley as a mentor last season, and they spent the offseason working out together in Los Angeles. Every morning in spring training, the teammates met for breakfast at 6:30 a.m. and worked out at 7. The bond has grown to the point that Hernandez now refers to Utley as "Dad.''

"I'm just excited to be a sponge around him. He's definitely one of the best in the game. He was the best in the game for a long, long time. Growing up, everyone tells you to not take veterans for granted and try to learn as much as possible. That's what I'm trying to do with him.''

Hernandez and the other Dodgers watched Utley go outside his comfort zone in acknowledging the cheers from the Philadelphia crowd on Monday. Utley has only 16 at-bats this month, so it's no lock that he'll be in the starting lineup for the next two games in this series. Regardless of what transpires, he is relieved to have the latest personal tribute behind him and be able to concentrate on what matters most.

"It's not the first time that I've been back here, but it's going to be the last time,'' he said. "It's going to be a special series for me personally. But at the end of the day, we're here to win some baseball games.''