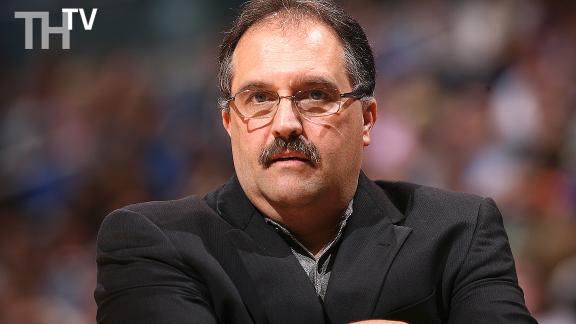 The Detroit Pistons hired Stan Van Gundy to be their coach and president of basketball operations on Wednesday.

Terms of the deal were not disclosed, but sources told ESPN.com on Tuesday night that Van Gundy and the Pistons had verbally agreed to a five-year pact worth an estimated $35 million. The team will hold a news conference Thursday.

"Stan is a proven winner in our league. He instills his teams with passion, purpose and toughness," Pistons owner Tom Gores said in a statement. "He is a great teacher who will help our players grow and develop.

"Stan is more than just a great coach, he's a great leader. What I'm most excited about is how Stan can help us shape the franchise and instill what it means to be the best. He's also a great communicator. My time with Stan has me convinced that he will bring our players, team and community to a very proud place."

Despite strong interest from the Golden State Warriors, who sources say had established Van Gundy as their top target to succeed the ousted Mark Jackson, Detroit managed to trump Van Gundy's hometown team with the offer of personnel control on top of coaching duties.

"It is an honor to be chosen to help Tom Gores build the Pistons into a team that competes for championships," Van Gundy said in a statement. "Tom's vision of building for the future while seeking immediate improvement is a challenge that I embrace. We will work to put a team on the floor that reflects the franchise's rich tradition and embodies the toughness and work ethic of fans in the Detroit area."

- Mark Jackson (@MarkJackson13) May 14, 2014The Pistons had been looking for a new head of basketball operations for the first time in more than a decade after Detroit legend Joe Dumars left his post in April.

After also firing first-year coach Maurice Cheeks just 50 games into the season, Gores settled on Van Gundy and elected to give him final say over basketball decisions -- despite Van Gundy's lack of front-office experience -- to trump the lure of going back to his native Northern California to coach the Warriors, who won 51 games during the regular season and sport a more attractive overall roster, headlined by established superstar Stephen Curry.

Van Gundy instead will take over a team that boasted some of the worst chemistry in the league this season but features top young big man Andre Drummond as a player to build around. The fate of Pistons interim coach John Loyer was not immediately known, but Loyer is under contract with Detroit for one more season.

In eight full seasons as a coach in Miami and Orlando, Van Gundy never had a losing record. The Pistons, on the other hand, have had six straight losing seasons -- including three straight sub-30-win seasons -- after a period of dominance under Dumars' stewardship that featured a championship in 2004 and six straight trips to the Eastern Conference finals.

Stan Van Gundy's Big Deal
The Pistons' new leading man didn't just get a big payday, but also a ton of control. Amin Elhassan on why he deserved it, and what he's like as a coach.