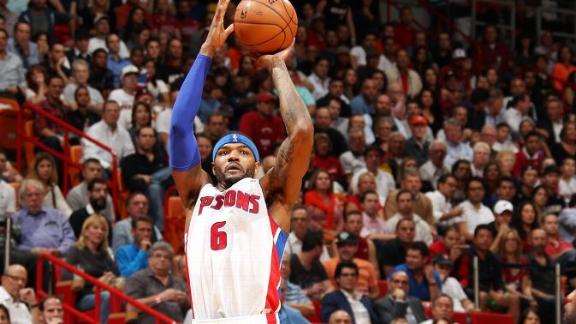 Stan Van Gundy's first trade as the new president and coach of the Detroit Pistons might prove to be a whopper.

Sources close to the situation told ESPN.com on Tuesday that the Pistons have engaged the Sacramento Kings in trade discussions this week that would potentially land Josh Smith in the same Sacramento frontcourt as DeMarcus Cousins and Rudy Gay.

Sources say that Smith being swapped in exchange for the combination of Sacramento's Jason Thompson and Derrick Williams is one trade construction that the teams have discussed. Although one source insisted Tuesday that no deal is imminent, another source told ESPN.com that the teams have continued to exchange proposals, with Williams potentially being replaced by another Kings player such as Jason Terry or Carl Landry.

Skeptics will inevitably question whether the Kings should indeed take the gamble of trying to fit Smith in alongside Cousins and Gay, especially with three years and $40.5 million remaining on Smith's contract from the Pistons last summer and in the wake of his struggles playing alongside Detroit big men Andre Drummond and Greg Monroe.

Sources say that the Kings, though, have been giving the swap serious consideration, largely because the deal would not cost them any players in their long-term plans and would also add a versatile and athletic defender to a roster that badly needs one, answering coach Mike Malone's call for more help on that end.

Another potential bonus is Smith's close relationship with Boston Celtics point guard Rajon Rondo, whom Sacramento has reportedly been targeting in trade talks for some time.

One source said that the Kings' focus, for the moment, is Thursday's draft and perhaps swinging a trade involving the No. 8 overall pick. Sources told ESPN.com's Andy Katz on Tuesday that Sacramento has narrowed its potential draft pick trade partners down to Boston, Phoenix and Philadelphia -- three teams that have multiple first-round picks.

But rolling the dice on Smith would not be dissimilar to the Kings' trade last December for Gay, which to date has worked out better than most outsiders projected.