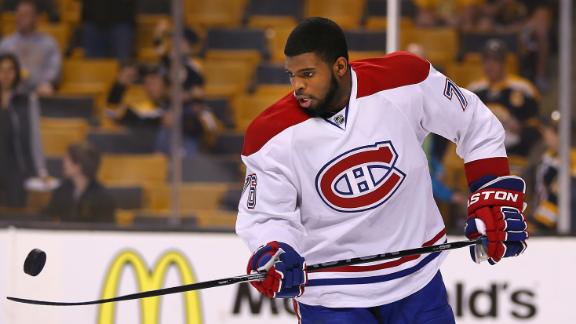 Restricted free agent P.K. Subban and the Montreal Canadiens agreed on an eight-year contract extension through the 2021-22 season, the team announced Saturday.

The contract is worth $72 million total, with an average annual value of $9 million, a league source confirmed to ESPN The Magazine's Craig Custance.

The deal comes a day after a tense arbitration meeting that concluded with no agreement.

Canadiens agree to terms on an 8-year contract with defenseman @PKSubban1. DETAILS -> http://t.co/sNORuYhULh

- Canadiens Montréal (@CanadiensMTL) August 2, 2014"We are very pleased to have reached a long term agreement with P.K. Subban," general manager Marc Bergevin said in a statement. "This agreement helps consolidate the future of our team. A key element of our group of young veterans, P.K. plays with a high level of intensity every time he steps onto the ice. Despite his young age, he carries a great deal of experience and brings contagious energy to the team. Defensemen of his level are a rare commodity in the NHL."

Subban, 25, took to Twitter to express his excitement about the deal.

Thank you to @canadiensmtl for making a commitment to myself and my family. Im Excited about the future! #letsgetit

- P.K. Subban (@PKSubban1) August 2, 2014The star defenseman is coming off the final season of a two-year, $5.75 million deal. He would have been a restricted free agent again next season if an agreement wasn't reached.

Subban had 10 goals and 43 assists -- the sixth-most points by a defenseman in the 2013-14 season -- for the Canadiens, who advanced to the Eastern Conference finals.