Players try to be bone-marrow donors 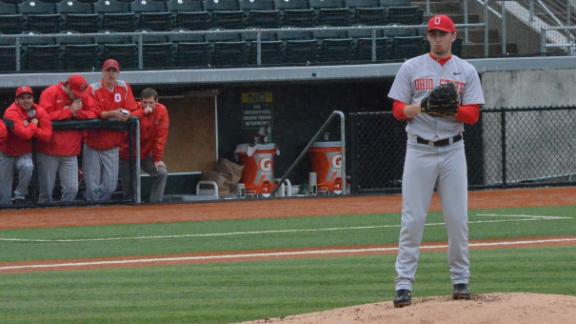 COLUMBUS, Ohio -- Ohio State's baseball captain put his team in a line that had nothing to do with getting results on the field, instead organizing players to help a teammate in the midst of a battle with myeloid leukemia.

Senior outfielder Tim Wetzel, already on the national registry for potential bone-marrow donors after going through the sign-up process 18 months ago, helped the rest of the Buckeyes join the list during an off day Monday in hopes one of them will be a match for freshman pitcher Zach Farmer.

According to the Columbus Dispatch, all 37 team members and coach Greg Beals had their cheeks swabbed for DNA testing, signed consent forms and provided personal histories to begin the process of becoming potential donors for Farmer or anybody else who may be eligible for a transplant.

"As soon as we learned Zach's diagnosis, I told [Beals] about this," Wetzel told the Dispatch. " ... Everyone was on board with this. This puts the game of baseball into perspective.

"Winning and losing is important, but right now Zach is in a battle for his life. We're trying to help him get through this."

Farmer, a left-hander with a 6-4 record and a 3.28 ERA, had been feeling sick for about a week when he went to see Ohio State's team doctor. Originally thought to have mononucleosis, a blood draw confirmed he had abnormalities in his blood counts.

His teammates will find out if any of them could provide a potential match should Farmer need one once the results from the samples are processed at a facility in Minneapolis that the Dispatch reported could put them on the registry in four to six weeks. Until then, they will turn their attention back to the diamond as they close out the regular season this week with a game on Tuesday against Cincinnati and a three-game set with Northwestern starting Thursday.

"Hopefully we get a match for Zach," Beals told the Dispatch. "What he is latching on to is being back in this dugout and playing for Ohio State. He signed up to be a Buckeye, and there is a common threat.

"It is voluntary. We didn't say, 'We need to do this.' It was a no-brainer for the guys in the locker room."